The coverage of the Mueller Report and its aftermath continues on today’s episode of the CAFE Insider podcast. Preet and Anne address criticisms of Bob Mueller and Bill Barr, analyze Trump’s defense strategy, and discuss what Congress will do next.

The release of the redacted Mueller report marks the end of the Special Counsel’s two year investigation. It’s also the beginning of an effort by lawmakers and the public to grapple with its findings and decide: what’s next? A special edition of CAFE Brief is here to help. Let’s dive in! 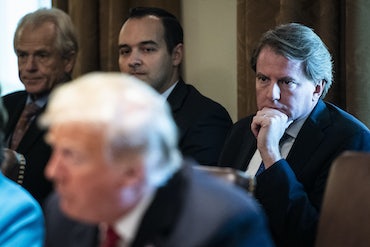 Former head of the Justice Department’s Office of Legal Counsel, Walter Dellinger, wrote in The Washington Post that Trump’s failure to defend the United States from Russia’s attack on American democracy is proof enough that Trump “is unfit to hold office.” Trump’s campaign was aware of Russian attempts to interfere in the election, but instead of bringing in law enforcement, “Trump denigrated those institutions and ignored their unanimous conclusion that the Russians’ concerted assault posed a serious threat to the United States.” Dellinger concludes, “[W]hat Mueller finds in his report is activity by the Trump campaign that was incompatible with true allegiance to the United States and its democratic system of government.”

Saved by the aides

Former White House counsel Don McGahn received praise from another former White House counsel, Bob Bauer, in a New York Times op-ed. Bauer argues “[w]e should be grateful for Mr. McGahn’s resistance to presidential wrongdoing,” such as Trump’s order to fire Mueller or his demand that then-Attorney General Jeff Sessions un-recuse himself from the Russia investigation. Many commentators agree, with pieces appearing in NBC News, The Guardian, and The AP, recognizing that attempts to influence the election would have been more successful had Trump aides not refused to carry out his orders.

In an op-ed for The New York Times, Just Security editor Ryan Goodman and former senior attorney at the National Security Council Joshua Geltzer point out an important “missing piece of the Mueller report”—the counterintelligence investigation. Such an investigation could determine if a foreign power may have influence over an individual, such as the president. NBC News reported last week that, according to current and former U.S. officials, the FBI’s counterintelligence probe continues.

Ronald Klain, who has served in a wide variety of legal and policy positions in Obama and Clinton administrations, has found failures in Mueller’s report. In a column for The Washington Post, he argues that “Mueller fell short in what he delivered,” committing “mistakes of historic proportion” in allowing Trump to “run out the clock” and obtaining only “‘substantial evidence’ and not the word of the president himself.”

Election law expert Professor Richard L. Hasen also found fault with Mueller’s report, writing in Slate that “Mueller made some key errors” when deciding not to prosecute Donald Trump Jr. for breaking federal campaign finance laws. Hasen argues that Trump Jr. committed a crime by attending a meeting in Trump Tower to obtain “dirt” from Russia on Hillary Clinton and that Mueller should have called him before a grand jury to testify. Hasen believes “Mueller has now given campaigns credible reason to believe they can accept help from foreign governments because they may have a constitutional right to do so.” 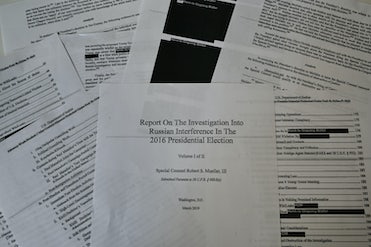 TOPSHOT – An illustration shows printed pages of the redacted Mueller Report at an office on April 18, 2019, in Washington, DC.

The Washington Post compared Attorney General Bill Barr’s pre-release statements about the Mueller report to what the report actually says, and determined that “Barr present[ed] an incomplete or misleading view of Mueller’s investigation and conclusions.” Democratic members of Congress largely agree, with 2020 contender Rep. Eric Swalwell calling for Barr’s resignation and Rep. Steve Cohen saying Barr should be censured, according to Politico.

Andrew McCarthy, former SDNY Assistant U.S. Attorney, argues the opposite in The National Review. In his opinion, accusations that Barr misrepresented Mueller’s report are “slanderously false” and Democrats “owe Bill Barr an apology.” House Judiciary member Rep. Jim Jordan also found no fault in Barr’s depiction, tweeting that “Barr has conducted himself in exactly the way the American people want.”

Democratic leaders Nancy Pelosi and Chuck Schumer sent a letter to Barr rejecting an offer for 12 senior lawmakers to view a less-redacted version of Mueller’s report. They argue that “[i]n order for Congress to fulfill its functions as intended by the Constitution,” Congress requires access to the full report and underlying evidence. Meanwhile, House Judiciary Committee Chairman Jerry Nadler has issued a subpoena for the unredacted Mueller report and all the underlying grand jury evidence and testimony. Buzzfeed News reporter Zoe Tillman tweeted the Justice Department’s official statement, which called Nadler’s subpoena “premature and unnecessary.”

Since the release of Mueller’s redacted report, numerous experts and columnists are calling for Congress to take up where Mueller left off. Columbia University Professor Jeffrey Sachs writes in an op-ed for CNN that House leaders have a “duty” to launch impeachment proceedings. Sachs notes that impeachment proceedings can be started “without deciding yet on whether to move to a vote, during which they and the public will gain information.”

Lawfare editors Susan Hennessey and Quinta Jurecic likewise urge Congress to open an impeachment inquiry, arguing that “for Congress to not even consider impeachment as a matter of serious inquiry is to declare that the legislature is not interested in its carrying out its institutional obligations as a coordinate branch of government.”

Several Democrats have broached the idea of opening an impeachment inquiry against the president. NBC notes that 2020 candidate Sen. Elizabeth Warren led the pack with the most forceful call by declaring that Trump’s “repeated efforts to obstruct an investigation” demands the House initiate impeachment proceedings.

House Democrats will hold a meeting in the coming weeks to discuss whether to pursue impeachment proceedings against the president. According to The Washington Post’s roundup of weekend commentary, on ABC News’s “This Week,” House Intelligence Committee Chairman Adam Schiff said, “I think what we are going to have to decide as a caucus is: What is the best thing for the country?”

We hope you’re enjoying the CAFE Brief. Email us at [email protected] with your suggestions of articles and analysis of legal and political news. We look forward to your feedback as we continue to expand CAFE content.