It’s been a momentous week in Washington with Robert Mueller making his first ever public remarks about his investigation into Russia and the Trump campaign. Preet Bharara and Anne Milgram broke down the news at the top of Stay Tuned and went into greater depth in a special 30-minute bonus for CAFE Insiders. The CAFE Insider podcast will be back on Monday with analysis of the latest headlines. Don’t miss out! Join the community.

In an unexpected move on Wednesday, Robert Mueller made his first public comments since his appointment as Special Counsel, explaining that his office did not clear President Trump of obstruction of justice, but neither could it bring an indictment because of the “long-standing department policy [that] a president can not be charged with a federal crime while he is in office” and “it would be unfair to potentially accuse somebody of a crime when there can be no court resolution of the actual charge.”

While not completely closing the door on testifying before Congress, Mueller said his testimony “would not go beyond [his] report,” which he called “my testimony,” adding, “I hope and expect this to be the only time that I will speak to you in this manner.” House Intelligence Committee Chairman Adam Schiff called on Mueller to publicly testify anyway, describing it as “the last duty that he’s called upon to make” as Special Counsel.

In what has been interpreted as a referral to Congress to launch impeachment proceedings, Mueller noted that according to the Office of Legal Counsel opinions, the Constitution allows for a remedy “other than the criminal justice system to formally accuse a sitting president of wrongdoing.”

Mueller has come under criticism from both sides of the political aisle, with critics faulting him for his reluctance to reach a decision and some, like the President’s frequent defender and Harvard Law School professor, Alan Dershowitz, accusing him of “partisan bias.”

In a press conference, Jerry Nadler, Chairman of the House Judiciary Committee where an impeachment investigation typically begins, said: “With respect to impeachment, all options are on the table, and nothing should be ruled out.” Nadler would not say whether he intends to subpoena Mueller’s testimony. Meanwhile, House Speaker Nancy Pelosi is sticking to her view that investigations – not impeachment – are the way forward, writing in a statement: “The Congress will continue to investigate and legislate to protect our elections and secure our democracy.”

White House press secretary Sarah Sanders issued a statement, urging: “[T]he Special Counsel is moving on with his life, and everyone else should do the same.” And President Trump unleashed a series of tweets Thursday, attacking Mueller as “highly conflicted” and indirectly admitting that Russia played a role in his election: “I had nothing to do with Russia helping me to get elected.” Contradicting himself a short time later, Trump told reporters, “No, Russia did not help me get elected…I got me elected,” and called Mueller“a true never-Trumper.” The President also ridiculed the idea that he could be impeached, calling the word “impeach” a “dirty, filthy, disgusting word.”

Last Thursday, May 23, Trump signed a memo granting Attorney General Bill Barr “full and complete authority” to declassify or downgrade any intelligence related to his review of how the Russia investigation began and any potential “spying” on the Trump campaign. The decision has been criticized by current and former intelligence officials who are concerned about selective release of material that could distort the picture and potentially compromise intelligence sources and methods.

Director of National Intelligence Dan Coats released a carefully-worded statement warning that the declassification of highly-sensitive information “would put our national security at risk.” Coats nevertheless said he would provide the Justice Department with “all of the appropriate information” and expressed hope that Barr would follow “long-established standards” to protect classified material. 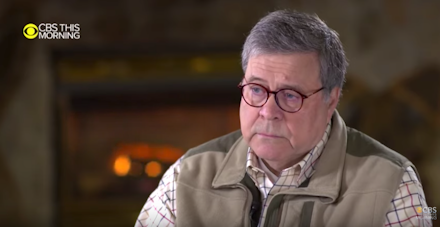 Trump has escalated his attacks on officials involved in launching the FBI’s investigation into his 2016 presidential campaign. Speaking at a White House event last week, he accused former FBI Director James Comey, former FBI Deputy Director Andrew McCabe, former FBI agent Peter Strzok, and former FBI lawyer Lisa Page of treason, stating: “A number of people. They have unsuccessfully tried to take down the wrong person…That’s treason.” As NBC News points out, “that isn’t what the Constitution says treason is,” noting that “being disloyal to the president” or “actions against a private citizen, which Donald Trump was as a candidate for president” would not constitute a treasonous offense.

Following the President’s accusations, Rep. Liz Cheney (R-WY) said in an interview with ABC News that the discussion between Strzok and Page about stopping Trump’s potential election win “sounds an awful lot like a coup and it could well be treason.” A fact-check by The Washington Post discounts Cheney’s interpretation, concluding that “there is no evidence FBI officials actually tried to derail Trump’s election.” Meanwhile, in an op-ed for the Washington Post, James Comey writes that accusations of treason and an attempted coup “are lies, and dumb lies at that.”

On Thursday, attorneys for the New York Immigration Coalition wrote a letter to U.S. District Court Judge Jesse Furman arguing that newly surfaced evidence reveals that the Trump administration’s attempt to add a citizenship question to the 2020 Census was aimed at creating gerrymandered maps that favor Republicans. The letter points to recently discovered files, obtained from a hard drive that belonged to redistricting specialist Thomas Hofeller. Now deceased, Hofeller allegedly played a key role in the administration’s decision to add the citizenship question to the Census. A 2015 study by Hofeller, the letter notes, concluded that adding the citizenship question “would clearly be a disadvantage to the Democrats” and “advantageous to Republicans and Non-Hispanic Whites.”

This new information contradicts the Justice Department’s prior testimony that the purpose of adding the citizenship question was to improve the administration of the Voting Rights Act, which aims to protect racial minorities from discrimination. Judge Furman had ruled against the Trump administration’s decision to add the question in January 2019 and although his decision is on appeal, he retains the authority to discipline witnesses who may have testified untruthfully. A hearing on the matter is scheduled for June 5.

We hope you’re enjoying the CAFE Brief. Email us at [email protected] with your suggestions of articles and analysis of legal and political news. We look forward to your feedback as we continue to expand CAFE content.

Sign Up To Receive This Email In Your Inbox