*Programming note: The CAFE Insider podcast is moving to Tuesdays! Catch next week’s new episode on Tuesday, December 17.Please note, Preet is traveling today. He’ll be sharing his thoughts on the latest developments next week.

In recent days, we’ve heard a lot about abuse of the FISA process and bipartisan calls to reform it. The conversation was sparked by the release of the Justice Department Inspect General Report on the FBI’s Russia investigation. Inspector General Michael Horowitz unearthed serious problems with the way the Bureau sought wiretaps on former Trump Campaign advisor Carter Page, putting a troubling spotlight on the government’s secret surveillance on domestic soil.

On Wednesday, Horowitz testified before the Senate Judiciary Committee, laying out recommendations that could help avoid similar failures in future investigations. Chairman Lindsey Graham, a longtime defender of FISA, expressed grave concerns over the report’s findings, stressing that the existence of the FISA system should be questioned “whether you like Trump, hate Trump, don’t care about Trump.” He told Horowitz:

I’m a pretty hawkish guy. But if the court doesn’t take corrective action and do something about being manipulated and lied to, you’ll lose my support. I know a lot about what’s going on out there to hurt us. And they’re real threats and they’re real agents and they’re really bad actors out there. I’d hate to lose the ability of the FISA court to operate at a time probably when we need it the most. But after your report, I have serious concerns about whether the FISA court can continue unless there’s fundamental reform.

FISA, the Foreign Intelligence Surveillance Act of 1978, prescribes procedures for requesting court authorized electronic surveillance and physical search of suspected spies and terrorists engaged in espionage or terrorism against the U.S. on behalf of a foreign power. Applications are considered by a special court called the Foreign Intelligence Surveillance Court (FISC), made up of 11 federal district court judges who are chosen by the Chief Justice of the United States.

According to an April 2019 Statistic Transparency Report by the Office of the Director of National Intelligence, there were 1,833 targets of such orders, including 232 Americans, in 2018.

Before the court authorizes electronic surveillance or a physical search, a judge must decide whether there’s probable cause that – among other things – the target is an “agent of a foreign power,” which includes, “any person” – a US citizen or not – who:

A. Knowingly engages in clandestine intelligence gathering activities for or on behalf of a foreign power, which activities involve or may involve a violation of the criminal statutes of the United States; or

FISA does not permit constitutionally protected conduct to form the sole basis for a probable cause finding that a U.S. person is an agent of a foreign power. In passing the law, Congress recognized that “there may often be a narrow line between covert action and lawful activities undertaken by Americans in the exercise of the First Amendment rights,” especially between lawful political activity and “other clandestine intelligence activities.”

According to a FISA guidance issued by the FBI’s Office of General Counsel, probable cause “is determined by the totality of the facts and circumstances, as viewed from the perspective of a reasonable person” and does not require certainty, making it a substantially lower standard than the “proof beyond a reasonable doubt” required for a criminal convictions or the “preponderance of the evidence” required in most civil cases. Notably, FISA does not require that the government show that there is probable cause to believe that the target is committing, has committed, or is about to commit a specific criminal offense – which is necessary for obtaining wiretaps in the criminal context.

A 1978 Senate Intelligence Committee report, cited by Horowitz, explains that Congress decided not to require that a crime be imminent or that elements of a specific offense exist, because counterintelligence investigations and criminal investigations have different goals. The Senate report states:

[I]f electronic surveillance is to make an effective contribution to foreign counterintelligence, it must be available for use when necessary for the investigative process. The criminal laws are enacted to establish standards for arrest and conviction, and they supply guidance for investigations conducted to collect evidence for prosecution. Foreign counterintelligence investigations have different objectives. They succeed when the United States can ensure that an intelligence network is not obtaining vital information, that a suspected agent’s future access to such information is controlled effectively, and that security precautions are strengthened in areas of top priority for the foreign intelligence service.

Civil libertarians for years have called the surveillance court a rubber stamp because it only rarely rejects wiretap applications. Out of 1,080 requests by the government in 2018, for example, government records showed that the court fully denied only one.

Defenders of the system have argued that the low rejection rate stems in part from how well the Justice Department self-polices and avoids presenting the court with requests that fall short of the legal standard.

In his response to the IG Report, FBI Director Chris Wray said he has ordered “more than 40 corrective steps” to address the issues identified in the report, including “concrete changes to ensure that our FISA protocols, verifications, layers of review, record-keeping requirements, and audits are more stringent and less susceptible to mistake or inaccuracy” and that the FISC and the Justice Department are “apprised of all information in the FBI’s holdings relevant to a determination of probable cause.”

As the debate about FISA reform continues, let us know what you think. Should the standard for probable cause be more stringent? Reply to this email or write to us at [email protected] 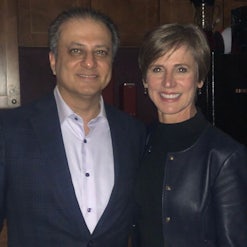 Today’s special episode of Stay Tuned features former Deputy Attorney General Sally Yates live from the Buckhead Theatre in Atlanta, Georgia. Preet took the stage with Yates to discuss her 27-year career at the Department of Justice. In their wide-ranging conversation, Yates shared her concerns about “people’s perception of justice” and “the lasting impact of undermining the public’s confidence in institutions.” If you haven’t already, listen to today’s episode, and share your thoughts with us by writing a review or emailing us at [email protected]

David Kris is a FISA expert who served as the head of Justice Department’s National Security Division in the Obama administration. Follow him, @DavidKris, for analysis of law enforcement issues.

If you haven’t already, listen to the latest episode of the CAFE Insider podcast: “Abuse(s) of Power” and follow along with this transcript of Preet and Anne’s conversation.