President George H.W. Bush, who died on Friday at age 94, was a true patriot who dedicated his life to public service. He served in a stunning range of roles: a Navy aviator, Chairman of the Harris County Republican Party, congressman, U.N. Ambassador, Chairman of the Republican National Committee, Envoy to China, CIA Director, Vice President, and Commander-In-Chief.

My first two votes in presidential elections were against George H.W. Bush, but as I put it last week, he loved America and served with character, class, and integrity. His service was extraordinary.

For most people, spending a full career in public service may not be reasonable for a variety of reasons. I understand that. I myself was in private practice for seven years before becoming an Assistant U.S. Attorney. But the importance of serving the public for at least a few years cannot be overstated. I often challenge students to name a public servant who hasn’t learned from it and advanced because of it. It is no easy task.

Public service is in part born of idealism, which is essential given the state of the world.  Nothing great was ever accomplished with a cynical heart. All of us must do our part in wiping away cynical smiles from the skeptics’ faces.

Describing the challenge for people who might wish to make a difference in the world, Henry Stimson, who served as the U.S. Attorney in Manhattan, and later Secretary of State and War, said the following more than a century ago:

Let them have hope, and virtue, and let them believe in mankind and its future, for there is good as well as evil, and the man who tries to work for the good, believing in its eventual victory, while he may suffer setback and even disaster, will never know defeat. The only deadly sin I know is cynicism.”

Some may worry that by themselves, they won’t make a significant difference; that their contribution might be too small and not worth the effort and the sacrifice.  To those people I say, recall the words of political theorist Edmund Burke, who once observed, “Nobody made a greater mistake than he who did nothing because he could do only a little.”

I hope you will do your part, however small, to make a difference.

Have people become too intolerant of opposing viewpoints? In the column, titled, “George Bush and the Obituary Wars,” Bruni highlights the absurdity of the blowback received by TV writer Bryan Behar (@BryanBehar), who departed from his usual liberal passions to show appreciation for George H.W. Bush— the man and his legacy. Bruni observes:

“[T]oo many of us tend to interpret events, political figures and issues in all-or-nothing, allies-or-enemies, black-and-white terms, blind to shades of gray. . . We like our villains without redemption and our heroes without blemish, and we frequently assign those roles in overly strict alignment”

As Preet tweeted before the op-ed’s publication: 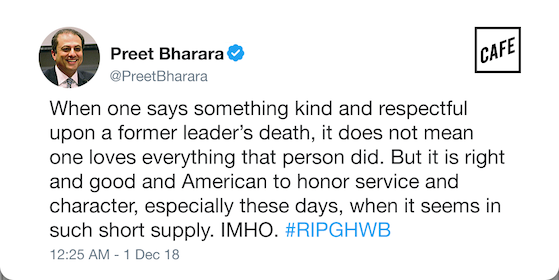 For historical context, read Meacham’s essay, titled “George H.W. Bush Believed in the Essential Goodness of Americans” (Dec. 2). Meacham describes Bush as a conservative who “eschewed the sudden and the visionary” in favor of “prudence and pragmatism.” He writes:

“History tends to prefer its heroes on horseback, at least figuratively: presidents who dream big and act boldly, bending the present and the future to their wills. There is, however, another kind of hero—quieter, yes, and less glamorous—whose virtues repay our attention. Hero itself comes from the Greek word meaning to defend and to protect, and there is greatness in political lives dedicated more to steadiness than to boldness, more to reform than to revolution, more to the management of complexity than to the making of mass movements.”

Meacham is also the author of “Destiny and Power: The American Odyssey of George Herbert Walker Bush.” The biography draws on extensive interviews conducted over a span of a decade, as well the 41st President’s audio diaries and First Lady Barbara Bush’s diary.

The world recently lost another great man. William Goldman was a novelist, playwright, and an Academy Award winning screenwriter. He died on November 16 at the age of 87.

Goldman’s path to making the world better was not through politics and government; it was through the art of storytelling, and he was one of the best storytellers of our time.

Goldman understood that the power of persuasion is rooted not just in statistics and data, or argument and philosophy, but in depicting real people in ways that make them relatable and teach us about humanity and the world.

Goldman’s “Adventures in the Screen Trade,” published in 1983, is one of the great books, not just in screenwriting, but in any genre. An insider’s view of Hollywood, Goldman famously writes in the book, “Not one person in the entire motion picture field knows for a certainty what’s going to work.” That observation holds true in every field.

Preet first read “Adventures in the Screen Trade” during his time as a young law firm associate with fleeting ambitions of becoming a screenwriter. Twenty-five years later, the book served as a model and inspiration for his forthcoming book because of what he learned about the art of storytelling.

Particularly poignant is Goldman’s candid observation about the writing process:

“Writing is finally about one thing: going into a room alone and doing it. Putting words on paper that have never been there in quite that way before. And although you are physically by yourself, the haunting Demon never leaves you, that Demon being the knowledge of your own terrible limitations, your hopeless inadequacy, the impossibility of ever getting it right. No matter how diamond-bright your ideas are dancing in your brain, on paper they are earthbound. If you’re trying a screenplay, you know it’s never going to be Bergman. If it’s a novel, well, what kind of a novelist can you hope to be when Dostoevski was there before you. And Dickens and Cervantes and all the other masters that led you to the prison of your desk.

But if you’re a writer, that’s what you must do, and in order to accomplish anything at all, at the rock bottom of it all is your confidence.

You tell yourself lies and you force them into belief: Hey, you suckers, I’m going to do it this one time. I’m going to tell you things you never knew. I’ve—got—secrets!”

As a book reviewer for The New York Times noted at the time of the publication, Goldman, “[T]ells us how to do it all, as well as how he himself sometimes did it and sometimes didn’t. He informs us how it should be done and why it often isn’t.”

*CAFE Insider does not have affiliate relationships and receives no fees for the purchases of its recommendations. 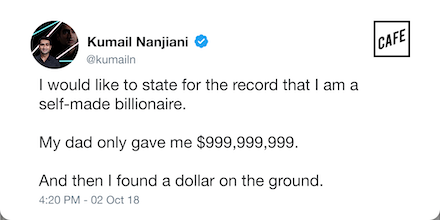 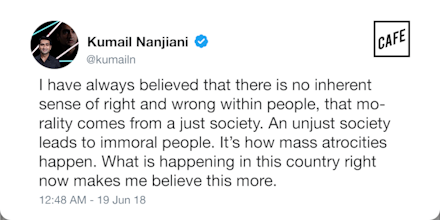 Kumail Nanjiani, @Kumailn, on Twitter. He is a comedian, actor, screenwriter, and this week’s guest on Stay Tuned.

Nanjiani’s Twitter is full of funny, and at times serious, observations about life, politics, and current events. Asked how he responds to those who say artists should stay in their lane and refrain from weighing in on political issues, Nanjiani told Preet:

Politics is something that truly affects all of us. That’s the one thing we all get to have an opinion on. The day that I get a palace floating in the clouds, that day I’ll stay in my lane. I won’t talk about what’s happening on Planet Earth, because that doesn’t affect me anymore. But until that day, it affects me; it affects my parents. This is our lane. [condensed and edited for clarity]

THIS WEEK ON THE CAFE INSIDER PODCAST

If you haven’t listened to this week’s episode, listen now to “Cohen’s Sentence; Comey’s Testimony.”

Preet and Anne break down the latest news, including the sentencing memo filed on behalf of President Trump’s former personal attorney, Michael Cohen.

For those curious about what good lawyering looks like, read the memo in full here.

And for further analysis of the craft entailed in the memo, read this article by Lawfare’s Quinta Jurecic and Ben Wittes, who write:

“There is actually a connection between the quality of the lawyering behind the brief and the argument within the brief that the court should go easy on Cohen. Because if the quality of the brief is a reminder of what good defense advocacy looks like, the brief’s contents are all about what defendant cooperation is supposed to look like.”

That’s it for this week. Please email us at [email protected] with your questions for Preet and Anne. Thank you again for joining the Insider community.

– Preet and the CAFE Insider Team