This week’s episode of CAFE Insider framed the rising tensions and conflicts between the first and second branches of government: Congress v. the Executive. But let’s not forget the power, prestige, and reach of the third branch: our Judiciary. It’s there that many of the battles between the first two branches might be resolved.

The Supreme Court may be called upon to settle disputes over congressional subpoenas. Trump has also suggested he would fight impeachment and conviction in the Supreme Court. This, of course, only scratches the surface of the outsized role Justices may play in setting the course for generations to come.

If the Supreme Court is an important drama unto itself, then the lead player in that drama is Chief Justice John Roberts. In anticipation of my Stay Tunedinterview next week with Joan Biskupic, the long-time Supreme Court observer and biographer of Justice Roberts, we’re doing something a bit different for today’s issue of the Insider newsletter. We’ll look at what’s on the horizon and what’s at stake for the highest court in the land.

Meanwhile, I’m closely watching Bill Barr’s hearings, especially in light of the news that Bob Mueller sent Barr a letter complaining that the Attorney General’s four-page memo on the Special Counsel’s conclusions “did not fully capture the context, nature, and substance” of the investigation.

I’ll be formulating my thoughts and sharing them with you in this Thursday’s episode of Stay Tuned and the Stay Tuned bonus.

The inner-workings of the Supreme Court

How do Justices decide which cases they will hear? How do they decide if they’ll allow someone who loses in trial court to skip usual review from the court of appeals and have the Supreme Court settle the dispute? “In deciding what to decide, through internal rules not made public but described here,” writes Joan Biskupic, “they can often influence the nation’s law as much as any signed opinion.”

Chief Justice Roberts has adopted a “deliberately low-profile approach” since the confirmation of Justice Brett Kavanaugh, Axios points out, noting that “there haven’t been a ton of politically charged cases at the court’s doorstep,” in part because Roberts “wants to leave a light footprint in politics – or at least to maintain the appearance of leaving a light footprint.”

There is “a budding bromance” between Justice Roberts and Justice Kavanaugh, Richard Wolf of USA Today writes, noting that the two “have voted in tandem on nearly every case that has come before them” and that they’ve been “more likely to side with the court’s liberal Justices than its other conservatives.”

In light of recent proposals by Democrats to increase the number of Justices on the Supreme Court, University of Texas law school professor Steve Vladeck revisits similar attempts at court packing since the passage of the Judiciary Act of 1869, which set the number of Supreme Court seats to nine. “If Congress increases the size of the Supreme Court for transparently partisan political reasons,” Vladeck concludes, “it would cement the idea the Justices are little more than politicians in robes, and that the court is little more than an additional — and very powerful — arm through which partisan political power can be exercised.”

The message in President Trump’s tweet that he’d appeal Congress’s decision to impeach him to the Supreme Court is in line with “Trump’s consistent theme that he views the nation’s highest court as an ally, and safeguard against lower court defeats and congressional opponents,” according to news analysis by the Washington Post.

The Court’s conservative Justices are clinging to “the decaying corpse of the American death penalty,” writes Garrett Epps, constitutional law professor at the University of Baltimore, in an analysis of the Court’s recent capital punishment cases. “[I]f carried out without gratuitous infliction of pain,” the death penalty may be constitutional he writes, “but history suggests that there is no such method.”

“The latest test of executive power in the Trump era,” according to Adam Liptak of the New York Times, comes in a case where a coalition of states is challenging Secretary of Commerce Wilbur Ross’s decision to reinstate a citizenship question in the 2020 Census questionnaire. The case, which was argued last week and is expected to be decided in June, “appeared to divide the court along the usual lines, with its five conservative members poised to defer to the administration and the court’s four liberal members ready to question its motives and methods,” Liptak reports.

The Court heard two cases last month that challenge alleged partisan gerrymandering by Republicans in North Carolina and by Democrats in Maryland. These cases, as CNN reported, could be “the most consequential” of the term since “Justices could, for the first time, establish a standard to decide when politicians go too far in drawing lines for partisan gain, or the court could slam the doors shut on such claims of extreme gerrymandering.”

During oral arguments in December, Justices seemed reluctant to overrule a long standing precedent, the so-called “separate sovereigns” exception to the Constitution’s double jeopardy clause, which permits criminal defendants to be prosecuted twice for the same crimes. The case, Gamble v. United States, has received a lot of attention because “a ruling against the government could limit the ability of states to bring charges against anyone charged by Mueller whom Trump might pardon,” Reuters reports.

The Court has agreed to hear three cases where Justices will decide whether federal civil rights law bans employers from discriminating against LGBT applicants and employees. Greg Stohr of Bloomberg News reports that “courts around the country are divided about the scope of the main U.S. job-bias law,” Title VII of the 1964 Civil Rights Act, which “outlaws job discrimination on the basis of ‘sex,’ as well as race and other factors, but doesn’t explicitly mention sexual orientation or gender identity.”

In an op-ed for the New York Times, Linda Greenhouse cautions against making “a snap judgment” about how the Court might rule in these cases, expressing surprise at “predictions of doom being offered by progressive court watchers.” Greenhouse writes: “[I]f the court is true both to the direction of its sex-discrimination precedents and to ordinary uses of the English language, all three cases ought to be easy wins for the plaintiffs.” 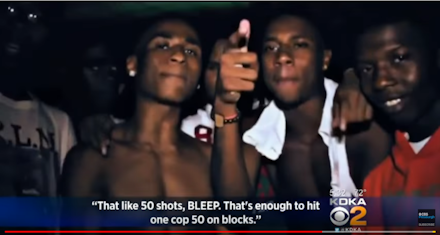 Jamal Knox (aka Mayhem Mal), a rapper sentenced to two years in prison for threatening police officers in a song (“Let’s kill these cops ’cause they don’t do us no good”), is appealing his conviction. Backing him is a group of hip-hop artists, including Meek Mill, Fat Joe, Chance the Rapper, and 21 Savage.

In a friend-of-the-court brief filed last month, the rappers argue that the song in question “is a work of poetry,” and urge the Court to take up the case: “This case provides an opportunity to definitively resolve the question of whether the only consideration relevant to assess if a threat exceeds the scope of First Amendment protection is whether a subjective intent to threaten is present or, alternatively, whether the pertinent inquiry includes how a reasonable person would interpret the statement.”