Early Monday evening I was sitting in the back seat of an immaculate Cadillac sedan, storm clouds overhead, crossing Manhattan at 53rd Street in the middle of rush hour. I was headed to the Ed Sullivan Theater, at a creeping pace. That’s where the Beatles on February 9, 1964, made their American debut. Countless other artists, from Eminem to the Rolling Stones, have played there. These days the theater is home to The Late Show with Stephen Colbert. I was on my way to that storied site because, for the first time, I was appearing as a guest on Colbert’s show to talk about current events and my book.

I had been invited to be on before but had never accepted. One time was right after I was fired by the President, an invitation I declined because it seemed that my first television interview post-termination should not be on a late-night comedy program.

As I sat in the car, now inching along at 53rd and Fifth, the network’s driver looked in his rear-view mirror and spoke to me for the first time. “Nervous?”

He appeared startled, and I was not clear if he was surprised that I was nervous or surprised that I had admitted it. Probably a bit of both. Then he said, “Didn’t you used to prosecute mobsters?”

I smiled and said, “Yes, I did.” And that had not made me nervous. So was Stephen Colbert more scary than the Gambino crime family? In a way, yes, though it may sound preposterous to say so. Prosecuting mobsters had been my job; it was second nature; it was eminently in my domain and wheelhouse. Appearing on a late-night talk show was not.

But what on earth was I nervous about? Was Stephen Colbert going to stump me with a question about Constitutional law? No. The Mueller report? No. Was he going to render me speechless or tongue-tied over a question about my book? No. Was TV scary? No. I have done many, many television interviews. One of my actual jobs is Senior Legal Analyst for CNN.

And yet, there I was, nervous. And a bit uneasy. I’ve been a fan and admirer of Colbert for years, dating back to his bits on The Daily Show with Jon Stewart. Maybe that was part of it. But more than that, with Colbert, there just seemed a special pressure to be witty and clever. Also pithy. The interview would be just a few minutes. And the whole thing is a bit unpredictable, with a boisterous live audience.

It turns out that even a seasoned prosecutor and podcast host can worry about appearing tedious or lawyerly or dull. About flubbing a question in front of a late-night audience with a particular expectation and sensibility. Up until the moment that Colbert came to shake my hand and welcome me backstage and even as I strolled out onto the stage, I had a case of the nerves. If I could confess that to my driver, I can confess it to you.

I am not sure how well the interview turned out, and I am not fishing for compliments or approval. My family thought it went great, for what it’s worth. What I do know is the following:

Why am I telling you all this? To me all of this seems so very obvious, but it is apparently not. My driver was surprised. But I was surprised, quite frankly, at his surprise. And so I think it’s important for people to know that, in this respect, all human beings are the same. Or at least most human beings. The ones I know, no matter how accomplished, don’t have ice water in their veins. Before my first press conference as U.S. Attorney I thought I would throw up. Same for my first opening statement. Same for my first deposition. Same for my first speech in high school. And so on.

Next week, 20 Democratic hopefuls will take center stage over two nights, in the first primary debates of the 2020 election. They are all impressive and accomplished people in their own ways. They all have the audacity to seek to be leader of the free world, commander-in-chief, holder of the nuclear codes. Many are excellent debaters and orators.

And I am willing to bet every single one of them will be nervous on debate night. How many would admit it, if asked? Would they view it as a mark of weakness? And over the next months in the campaign, how many will ever deign to admit error, offer apology, concede a gap in knowledge.

That is one thing I will be watching for – proof of life, evidence of humanity and also humility. We have had enough arrogant and unapologetic self-love at the apex of power lately.

WATCH PREET ON THE LATE SHOW

Watch Preet’s appearance on the Late Show with Stephen Colbert where he talks about the importance of independent prosecutors and more.

What would you do if you had a missed call from the President of the United States? Share your thoughts by replying to this email or writing to us at [email protected].

With just two weeks left in the Supreme Court’s term, there has been a flurry of activity with justices issuing decisions on a number of cases with implications well beyond the facts before them. On Monday, the Court issued a 7-2 decision in Gamble v. United States, a case that has bearing on the state criminal charges Paul Manafort faces in Manhattan.

The Court in Gamble upheld the dual sovereignty doctrine which allows state and federal authorities to prosecute a person separately for the same crime without violating the Fifth Amendment’s ban on double jeopardy (i.e., no person may be “twice put in jeopardy” “for the same offence”). The dual-sovereignty doctrine holds that two crimes are not “the same offense” for double jeopardy purposes if they are tried by different sovereigns. In the U.S., the federal government and the states are deemed to be different sovereigns.

In Gamble, the defendant Terance Gamble was charged for violating Alabama’s felon-in-possession-of-a-firearm statute, and federal prosecutors later charged him under federal law for the same instance of possession. Gamble challenged the district court’s application of the dual-sovereignty doctrine, arguing that he had been prosecuted at the federal level for “the same offense” as the one at issue in his state conviction, which he claimed to be in violation of the Fifth Amendment. Justice Samuel Alito Jr., writing for the majority, rejected Gamble’s request to overrule 170 years of dual-sovereignty precedent:

“…fidelity to the Double Jeopardy Clause’s text…honors the substantive differences between the interests that two sovereigns can have in punishing the same act.”

Justice Alito argued that the federal and state governments can successively prosecute the same person for the same conduct because the “nature of the crime or its effects on ‘public safety’ might well ‘deman[d]’ separate prosecutions.”

Justices Ruth Bader Ginsburg and Neil Gorsuch, an odd dissenting couple, each wrote dissenting opinions, pointing out the liberty-denying potential of successive prosecutions. In his dissent, Justice Gorsuch said: “A free society does not allow its government to try the same individual for the same crime until it’s happy with the result.” Justice Ginsburg referenced Alexander Hamilton’s The Federalist in her dissent:

“The United States and its constituent States…are ‘kindred systems,’ ‘parts of ONE WHOLE’…Within that ‘WHOLE,’ the Federal and State Governments should be disabled from accomplishing together ‘what neither government [could] do alone—prosecute an ordinary citizen twice for the same offence.’”

Paul Manafort, President Trump’s 2016 campaign manager, could have significantly benefitted from the Court overturning the dual-sovereignty doctrine since the state charges he faces echo those for which he was convicted federally. If Trump were to pardon Manafort now, only the federal prosecution would be vitiated because the President cannot pardon someone for state or local crimes. But with the doctrine still in place, Manafort continues to be exposed to state charges, and is unable to be saved by Trump’s pardon power. 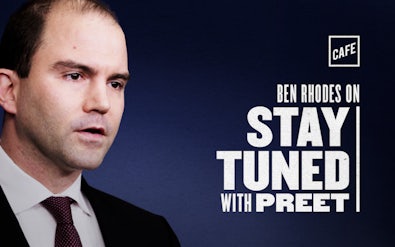 Ben Rhodes is this week’s guest on Stay Tuned. Rhodes served as former Deputy National Security Advisor and speechwriter to President Obama. He is the author of The World As It Is: A Memoir of the Obama White House.

In this sneak peek at the interview, Rhodes explains why America’s identity is inextricably tied to its President:

[America’s] identity is not rooted in an ethnicity, a religion, a monarchy–the things that nations generally are rooted in. That’s not the case here. We kind of count on presidents in particular to tell us who we are…They tell us what we stand for. They tell us where we’re going. And they fill that gap of what is our national identity.

Don’t forget to listen to this week’s episode. It drops this Thursday, June 20.

Want a second legal opinion? Professor Marty Lederman teaches constitutional law at the Georgetown University Law Center and has twice served in the Office of Legal Counsel at the Justice Department. Follow @Marty_Lederman to read his insightful legal analysis and commentary on today’s most pressing issues.

LAW IS FOR LOSERS 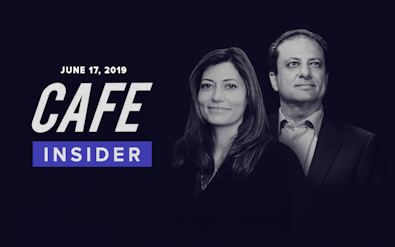 If you haven’t already, listen to the latest episode of CAFE Insider podcast: “Law is For Losers.” Preet and Anne break down President Trump’s interview on ABC News, the Office of Special Counsel’s recommendation to remove Kellyanne Conway from her role as counselor to the president for alleged violations of the Hatch Act, and more.

*Please note, you may now manually add your unique Insider Podcast feed to your favorite podcast app. Here are the instructions.

Get your Stay Tuned merch! Insiders get a a special 20% discount on their first purchase. Use code: INSIDER20. 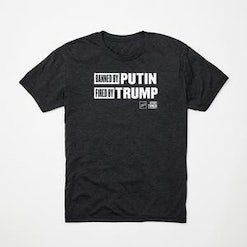