As the saying goes, opposites attract. Typically, that aphorism applies to a theory of romantic attraction, if not ultimate compatibility. These days, there is a fervent faith in that principle of attraction, not on the part of nascent lovers, but aspiring politicians who hope that voters will fall in love with the opposite of the man now in the White House.

Everyone seems to be seeking the mantle of the Opposite. Several Democratic candidates have articulated their theories of the Opposite on the Stay Tuned podcast and elsewhere.

Here’s Mayor Pete Buttigieg, who has said: “I’m definitely the only left-handed Maltese-American-Episcopalian-gay-millennial-war veteran in the race.” That’s funny and true.

Then there’s Andrew Yang, whose variation also makes people laugh out loud: “The opposite of Donald Trump is an Asian who likes math.”

Most recently, Senator Michael Bennet (“two N’s, one T,” as his Twitter bio advises) gets in on the act. He famously posted a tweet promising not to be so attention-grabbing as the former reality TV star: “If you elect me president, I promise you won’t have to think about me for 2 weeks at a time.”

The theory of the Opposite, in the words of these aspirants, is meant to be serious but also tinged with humor. Joe Biden also presents himself as an Opposite, but whereas his younger adversaries press their cases wryly, he tends to earnestness. He promises a kind of grand return – to decency, compassion, and good character. To some extent all of the other major candidates (Harris, Warren, Sanders, O’Rourke) do the same.

Is this strategy geared to exploiting a natural pendulum swing, such as we often see in political cycles? Or is it something particular to Trump and therefore more persuasive than usual? I tend to think the latter. I tend to think that Trump’s unprecedented and unparalleled devotion to almost nothing — but his own ego — fuels the most nihilistic style of leadership in presidential history. And this creates a sharper craving for something Opposite.

So what is the thing that the liberal candidates want to be the opposite of? To be sure, there is a policy aspect to it. They want to make a hard break with Trump’s arguably racist immigration policies, inequitable tax plans, and hard-right judicial nominations. They want to stand up for the free press and for our allies, and they want to stop making common cause with dictators.

But there is more to it than policy of course. There is Trump’s character, his personality. His infuriating, cynical, corrupting, unprincipled, exhausting persona. Trump is ignorant, empty, crass, and dishonest. He is all vice, no virtue. And that, in many ways, was and is his strength. Ordinarily, it wouldn’t be. But for a disillusioned and disenfranchised electorate, legitimately disgusted with politics as usual, with primped and pampered politicians saying not much and doing even less, it somehow became a recipe for success. He was the un-candidate. The F-you candidate. And even as many rock-ribbed conservatives (not in politics) have fled the party, primary challenges are brewing, and erstwhile cheerleaders like Anthony Scaramucci and Joe Walsh have turned on him, Trump remains more popular among self-identified Republicans than any GOP president in decades.

For some supporters this is because of his policies; the word on Wall Street is that many genteel billionaires cringe at the man but relish the tax-cutting. For others, it is the persona itself — for them, Trump is a liberating breath of fresh air, a tough-talking, media-bashing, nationalistic, own-the-libs politician, “the likes of which we have never seen.”

But vast swaths of the electorate have had enough — suburban women in particular, apparently. They are not just sick of the corruption and the chaos. They have had it with the lies, the narcissism, and the juvenile taunts. That’s maybe why this time around, Democrats have learned the lesson that some of Trump’s primary rivals did not. Maybe Biden endures at the top of the polls because he stresses his Opposite character more than his opposing policies, and not simply because of name recognition and so-called “electability.” It’s a thought, anyway.

Back in 2016, the Republicans in the race did not all proceed on a theory of the Opposite. Remember Marco Rubio? Trailing in the polls towards the end, he started emulating Trump. He copied the crass language and switched out a hopeful stump speech for one laced with mockery of Trump’s hand size and other debasing stuff. It did nothing for Rubio, except work a mighty reduction in his public stature that merely losing could never have accomplished.

Democrats this time around know better.

THE ‘SUPREME COURT’ OF THE EXECUTIVE BRANCH

Many of you have asked about the Office of Legal Counsel (OLC), an engine of the Department of Justice that provides controlling legal advice and sets policy for the Executive Branch. Recently, the OLC has gained attention as a result of its centrality in Robert Mueller’s decision not to seek an indictment of President Trump on obstruction of justice charges. Less attention has been given to the role the OLC plays in interpreting laws for the Executive Branch and keeping many of these laws – embodied in formally written opinions – secret and beyond the reach of public scrutiny and accountability.

The OLC, charged by the Attorney General with “rendering opinions and legal advice to the various Executive Branch agencies” since 1934, is currently led by Assistant Attorney General Steven Engel. According to a DOJ memo on best practices, OLC attorneys “must always give candid, independent, and principled advice—even when that advice is inconsistent with the aims of policymakers.” The advice is controlling. As Fred Barbash recently wrote in a Washington Post op-ed, “the opinions of this elite corps of lawyers are binding on the Federal government.”

A Freedom of Information Act (FOIA) lawsuit filed against the DOJ last month seeks the release of all OLC decisions issued before February 15, 1994. The plaintiffs – the Knight First Amendment Institute at Columbia University, Campaign for Accountability, and five professors – argue that “[b]y concealing this governing law, the OLC has not only defied Congress’s intent in enacting FOIA to extinguish secret law, but also violated fundamental democratic principles.” The OLC issues opinions on centrally important questions of law, such as – the lawsuit notes – “legal approval for President Bush’s use of enhanced interrogation techniques, President Obama’s use of drone strikes, and President Trump’s imposition of a travel ban.”

Given the OLC’s ability to expand presidential power, a series of passionate op-eds have argued that—particularly under Trump—the OLC runs the risk of becoming an especially damaging partisan force. In January, Erica Newland, former OLC attorney advisor and current counsel for the nonprofit group Project Democracy wrote in an op-ed for the Washington Post:

When it comes to the president’s findings about the state of the world, OLC generally defers to the president. This deference, which is baked into OLC’s culture, proceeds from the assumption that the president is acting consistent with Article II of the Constitution and with his oath of office, both of which require that he ‘faithfully’ execute the laws.

Many crucially important questions that come before the OLC are often issues of first impression that never reach the courts, giving the Office the final say on disputed laws. There are strong arguments for bringing greater transparency to the OLC’s decision making, yet the Office must maintain substantial secrecy in the interest of national security.

How does the idea of a secret body of law, often described as “the law that presidents make,” sit with you? Let us know what you think by replying to this email or writing to us at [email protected]. 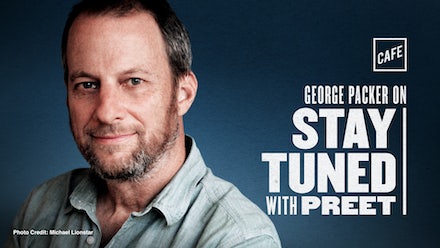 George Packer, author and staff writer for The Atlantic, joins Preet on Stay Tuned for a wide-ranging conversation about his new book, Our Man: Richard Holbrooke and the End of the American Century, and what the life of this complicated diplomat can teach us about America’s politics and principles today.

In this sneak peek at the interview, Packer explains how the refugee crisis reveals a major difference between Holbrooke’s foreign policy and Trump’s:

If we’re not open to helpless, suffering people who need a safe harbor, then we no longer stand for anything other than power, which is Trump’s foreign policy: power alone. For Holbrooke, as much as he was a power politician, he never wanted to let go of the idea that we stood for something more than just our own power.

Don’t forget to listen to this week’s episode. It drops this Thursday, September 5th.

AND JOIN US FOR A LIVE TAPING OF STAY TUNED:

Chef José Andrés’ Twitter bio reads: “We are all Citizens of the World. What’s good for you, must be good for all. If you are lost, share a plate of food with a stranger…you will find who you are.” Chef Andrés embodies this warmth and generosity in all endeavors, including his most recent one: feeding victims of Hurricane Dorian through his organization World Central Kitchen. For inspiration, and updates on what humanitarian good this Michelin-starred, James Beard Award-winning chef will do next, follow him @chefjoseandres 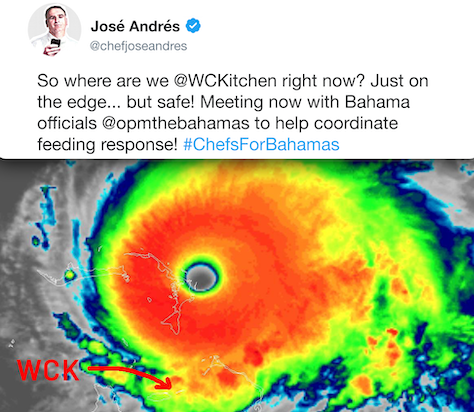 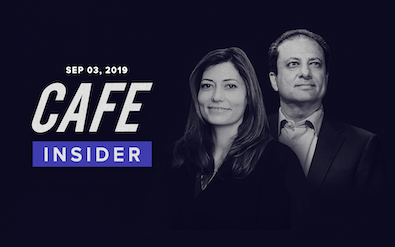 If you haven’t already, listen to this week’s episode: “Ethics: Comey, McCabe, Barr,” where Preet and Anne discuss the Inspector General’s report admonishing Jim Comey, the possibility that Andrew McCabe is indicted for lying to federal agents, and Bill Barr’s pricey family holiday party at a Trump hotel in D.C.

*Please note, you may now manually add your unique Insider Podcast feed to your favorite podcast app. Here are the instructions.