The holidays are upon us and I am looking forward to a break, especially from the unabating drumbeat of breakings news. We’ll be taking the next week off, so it’s a good time to step back and reflect on where we are and what’s ahead in the new year.

A macro look at the multitude of legal challenges the President faces paints a stunning picture of this moment in the history of the American presidency: the Trump campaign, inaugural committee, foundation, and businesses are all under civil or criminal investigation. The President’s associates and even his family members are in legal jeopardy.

Just yesterday, the Trump Foundation agreed to dissolve after the New York Attorney General accused it of “a shocking pattern of illegality,” including, “unlawful coordination with the Trump presidential campaign, repeated and willful self-dealing, and much more.” In April, the Office reached a $25 million settlement with President Trump for “swindling thousands of Americans out of millions of dollars through Trump University.”

Come January, the list of investigations will only grow longer when House Democrats assume oversight authority. Some half dozen incoming congressional committee chairs with jurisdiction to investigate the administration will be in a position to uncover what they suspect: more malpractice, misconduct, and malfeasance. This check should be welcome.

The incoming chair of the Judiciary Committee Rep. Jerry Nadler has already sent letters to administration officials warning them to preserve documents related to the Special Counsel’s investigation and the firing of Jeff Sessions. One of the first witnesses Rep. Nadler expects to testify is Acting Attorney General Matt Whitaker who will be questioned about the communications he’s had about the Mueller probe, among other things.

The Judiciary Committee has the authority to start impeachment of the President, though Rep. Nadler has cautioned against initiating impeachment proceedings without substantial support from Trump voters. “You don’t want to tear the country apart,” he told The New York Times Magazine. Let’s see if that holds.

Rep. Adam Schiff, the incoming head of the Intelligence Committee, has promised to look at Michael Flynn’s conduct, allegations of money laundering, and the June 2016 Trump Tower meeting where Donald Trump Jr., Jared Kushner, and Paul Manafort met with a Kremlin-linked lawyer in hopes of obtaining damaging information about Hillary Clinton. For starters.

Rep. Elijah Cummings, who will chair the Oversight and Government Reform Committee, has said he’d look into, among other matters, the execution of the Administration’s family separation policy, use of personal email accounts for official government communications, and use of state-owned aircraft for personal travel.

With so much to scrutinize, it is important that lawmakers do not infringe on prosecutors’ investigations, avoid overlap between committees, and laser focus on the big picture. Chasing down the latest controversy on network news chyrons is a strategy for scoring political points, but it doesn’t necessarily amount to good governance and oversight. People want the truth and a real check on executive power; democracy isn’t served by politicized oversight.

I hope you and our growing CAFE Insider community will take the holidays to reflect on the country and think about your ideal vision for America. We all have a role to play in democracy. I know I’ll be bracing for everything to come and continue to use my voice to speak out about justice, the rule of law, and our democratic ideals.

Happy holidays, and thank you again for becoming a member of CAFE Insider.

LEARN ABOUT THE COMMITTEES

The fundamental objective of congressional oversight is to check and monitor the vast authority delegated to federal departments and agencies. The Constitution does not explicitly grant Congress investigative authority, but the Supreme Court has held that the power to investigate is implied in Congress’s legislative functions. Writing for a unanimous Court, Justice Van Devanter stated in McGrain v. Daugherty (1927):

“We are of the opinion that the power of inquiry—with process to enforce it—is an essential and appropriate auxiliary to the legislative function. . . A legislative body cannot legislate wisely or effectively in the absence of information respecting the conditions which the legislation is intended to affect or change; and where the legislative body does not itself possess the requisite information—which not infrequently is true—recourse must be had to others who possess it. Experience has taught that mere requests for such information often are unavailing, and also that information which is volunteered is not always accurate or complete; so some means of compulsion are essential to obtain what is needed. All this was true before and when the Constitution was framed and adopted.”

Read more about the history and jurisdiction of congressional investigators.

And for a look at what’s in store when Democrats take over the House, read this feature in The New York Times Magazine where Jason Zengerle asks Representatives Jerry Nadler, Adam Schiff, and Elijah Cummings: How far will you go?

LEARN ABOUT THE WHITE HOUSE COUNSEL

The man who will lead the Trump Administration through the next two years of legal challenges is Pat Cipollone who recently succeeded Don McGahn as the new White House Counsel. Cipollone is an experienced litigator and a former Justice Department official who worked under Bill Barr, President Trump’s nominee for Attorney General. Read about Cipollone and his team.

And if you haven’t already, listen to Preet’s interview on Stay Tuned with former Obama White House Counsel Bob Bauer who talks about the challenges and responsibilities that come with the job.

Bauer, on House Democrats and the likelihood of impeachment:

“On the one hand, they recognize that the public wants less politics and more action on the issues that they care about. They’re going to worry about a Congress that is paralyzed by a preoccupation with impeachment. I think they are sensitive to that. But on the other hand, I also think they know that they have a constitutional responsibility, if evidence surfaces of impeachable conduct, to take it seriously, and I think they should. I hope they do.” [condensed and edited for clarity]

Michael Flynn’s sentencing was postponed yesterday until he completes his cooperation with federal prosecutors. Judge Emmet G. Sullivan of the Federal District Court in Washington said he would not hide his “disgust” at Flynn’s conduct.

As Preet texted members of CAFE Insider, “Michael Flynn is clearly guilty of far more than lying to the FBI & Judge Sullivan knows it.”

In a sentencing memo filed last week, Flynn’s defense attorneys suggested that the FBI agents had entrapped him into lying when they interviewed him in January 2017 about his conversations with Sergey Kislyak, the former Russian ambassador. The defense memo also suggests that the FBI should have insisted on Flynn having counsel represent him during the interview. These arguments were picked up by The Wall Street Journal editorial board, which cast Flynn as a victim of an FBI set up.

This exchange below between Judge Sullivan, Flynn’s lawyer Robert Kelner, and Flynn should put an end to this faux controversy. 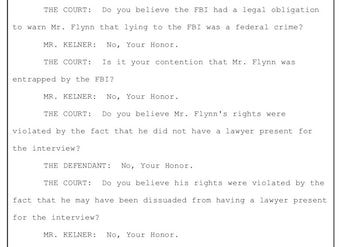 Read this exclusive CAFE Insider article by Elie Honig rebutting The Wall Street Journal’s editorial. Mr. Honig is a former federal prosecutor who served as chief of organized crime at the U.S. Attorney’s Office under Preet.

And don’t miss tomorrow’s Stay Tuned. Preet will address the Flynn fiasco in the Q&A portion of the episode featuring Kara Swisher.

The Merriam-Webster Dictionary just named their 2018 Word of the Year: justice. The logophiles at Merriam-Webster tailor their tweets to the news. Follow @MerriamWebster to enhance your vocabulary with tweets on word of the day, trending words, and observations on language. 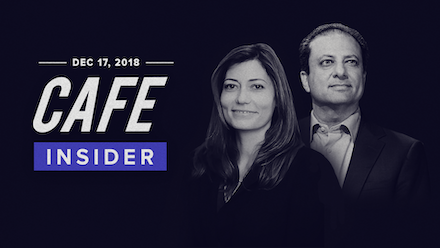 Prosecutors would need to prove that Trump intended to influence the campaign when, as alleged, he directed Michael Cohen to make hush money payments to his former mistresses. Last week, it was reported by The Wall Street Journal, among other outlets, that Trump was present during an August 2015 meeting when Michael Cohen and David Pecker, publisher of the National Enquirer, strategized on preventing Karen McDougal and Stormy Daniels from going public with their allegations of extramarital affairs with Trump.

“One of the things you have to show would be that Trump acted knowingly and willfully, which means, he has to understand what’s happening, and have done it intentionally. So if that meeting turns out to have been true and Trump himself, or one of his representatives who then conveyed information to him, was there, that means that they came up with this scheme to hide information from the American public to basically break the law in campaign finance. And so that becomes really important.”

“A lot of this comes down to a question of what was the intent of the payment. And you can have multiple purposes that surround any kind of payment, and you have to show for this to be a campaign contribution violation a number of things. Among the things you have to show is: (1) if the payment was made by someone who was not Donald Trump, it was coordinated with the campaign, and (2) it was related to the campaign. Now, the idea that it was coordinated with the campaign would seem to be born out of the fact that Michael Cohen was a surrogate for the campaign [and] was clearly somebody who was close to the president and working on the campaign.” [condensed and edited for clarity]

If you haven’t already, listen to “Trump’s Criminal Liability.” 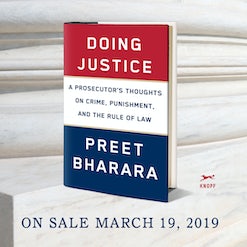 You can now order Preet’s book, “Doing Justice: A Prosecutor’s Thoughts on Crime, Punishment, and the Rule of Law.” It ships March 19. It is also available as an audiobook.

– Preet and the Cafe Insider Team