We are a pretty oblivious lot. We walk around consumed by our own thoughts, lost in our smartphone conversations, focused on our daily agendas. We miss a lot of the world around us. We pass by buildings and structures and people and wouldn’t be able to describe them later, even if our lives depended on it. We are not so good at noticing.

Okay, maybe I should just speak for myself. Here’s a confession: When I was writing Doing Justice, I wanted to begin a chapter with a detailed description of the lobby of SDNY’s headquarters at One St. Andrew’s plaza, which I had passed through literally thousands of times. I knew the shabby feel of the entryway, the sometimes-squeaky revolving door, and wrote that the place resembled “a high-security, state-owned airport lounge.” But other details escaped me. How many faces were depicted in the large mural on the left wall? What color were the lined-up pleather chairs? Were they gray or black? Where exactly was the panel of “Wanted” posters I had rushed by countless times? How tall was the memorial to famed SDNY investigator Kenny McCabe, the subject of my chapter? I couldn’t summon these details. So I had someone go to the lobby and email me pictures so I could write my chapter. I’m a bit embarrassed by that. I had to do the same, by the way, when in a later chapter I tried to describe the wooden wheels in magistrate’s court from which judge assignments were plucked. Were they light wood or dark? Were the wheels round or hexagonal or octagonal? I had stood before them in anticipation a million times, but I could not remember. (See p. 234 for the answer). Like many people, I suppose, I am a victim of my own self-absorption.

I have thought recently about the times that I’ve newly noticed things, observed other people more sharply. When has that happened? Once was in 2018, when I grew a beard for the first time. Suddenly I was a beard expert. Before that I could not have opined on the facial hirsuteness of any man other than maybe Wolf Blitzer. But when I grew my own, I noticed everything about the bearded men I saw on the street, at the office, and on television. I observed how long, how trimmed, how gray. I held a mental image of the various observed beard prototypes in my head as I groomed my own face in the mirror.

Other examples abound. When I was in the market for a diamond engagement ring 20 years ago, I for the first time noticed the ring-finger rocks on every woman I saw, trying to judge the color, cut, clarity, and carat weight. There are less happy examples too. After my wife and I were mugged on our Manhattan street in 2001, I better noticed alleys and entryways and hiding spots when I walked. After 9/11, I looked more keenly for suspicious conduct and unattended packages.

It occurs to me, with some irony, that these episodes of noticing were themselves arguably a function of self-absorption too – whether relating to my own beard grooming, diamond research, or basic self-protection. Even on vacation, for some of us, when our eyes and minds are trained literally on sight-seeing, such attention is in conscious service of a kind of holiday therapy, part of an effort to record the beautiful glaciers or cathedrals or vistas, to be carried back like souvenirs to our regular lives, whereupon we abruptly abandon the noticing instinct. Maybe painters and poets and other writerly types do a better job of noticing than the rest of us. On the other hand, it’s literally their profession to do so, and I’m not sure anymore how much credit I’m willing to give them.

Why am I prattling on about this? The answer, which may surprise, is the coronavirus. In the wake of this spreading pandemic, every one of us has done a good bit of new noticing. How often people cough in public. How awkward it is not to shake an outstretched hand. How many times you touch surfaces that countless other (unclean) hands have also touched. How quickly you have always washed your hands (now that you know at least 20 seconds is recommended). How hard it is not to touch your face. We are noticing who looks sick on the subway so we can avoid them and identifying the hypochondriacs among us so we can commiserate. This seems necessary and natural. 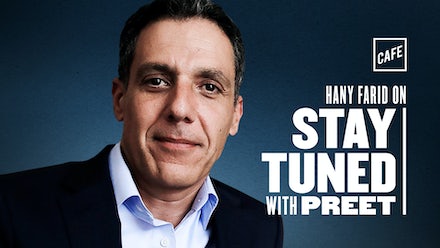 Hany Farid is this week’s guest on Stay Tuned. A professor at the University of California, Berkeley, Farid is widely considered the “father of digital forensics,” and has developed a suite of tools that can be used to detect “deepfakes” — manipulated images, audio, and video. Farid has created software that can identify explicit or extremist content online and he’s part of a team developing techniques to screen for “deepfakes” featuring high-profile politicians and 2020 candidates.

In this excerpt from his conversation with Preet, Farid explains how a well-executed deepfake could impact the upcoming presidential election:

24 to 48 hours before election night, somebody creates a video of a candidate and releases it online. And before anybody figures it out, we’ve moved hundreds of thousands of votes. And if you don’t think that matters, I will remind you that in 2016, the difference between President Trump and Hillary Clinton was 80,000 votes in three states. So, when the margins are thin, you can move people very quickly.

Listen to today’s episode, the bonus, and share your thoughts by writing a review or emailing us at [email protected]m

As advances in artificial intelligence accelerate the threat of “deepfakes,” there is a growing sense of unease about the potential of synthetic content to disrupt many parts of society. One area where deepfakes are increasingly common is the world of virtual pornography.

Under federal law, it is illegal to produce, possess, receive, or distribute child pornography, which is defined as:

any visual depiction, including any photograph, film, video, picture, or computer or computer-generated image or picture, whether made or produced by electronic, mechanical, or other means, of sexually explicit conduct, where—

(A)the production of such visual depiction involves the use of a minor engaging in sexually explicit conduct;

(B)such visual depiction is a digital image, computer image, or computer-generated image that is, or is indistinguishable from, that of a minor engaging in sexually explicit conduct; or

(C)such visual depiction has been created, adapted, or modified to appear that an identifiable minor is engaging in sexually explicit conduct.

Technological advancements in the ability to create what is referred to as “morphed  child pornography” may be a loophole around the law, which specifically guards against the exploitation of actual children.

“Morphed child pornography,” professor Stacey Steinberg writes, “is created when the innocent image of a child is combined with a separate, sexually explicitly image, usually of an adult.”

While the law is clear about prohibiting all forms of pornography involving an “identifiable minor” — that is, any person under the age of 18 “recognizable as an actual person by the person’s face, likeness, or other distinguishing characteristic” — it is less certain that banning artificially constructed pornographic images of children could pass First Amendment muster.

Should all depictions of child pornography be prohibited — whether they involve images of actual children or images that are digitally conjured?

The first effort to criminalize virtual pornography occurred in 1996 with the Child Pornography Prevention Act (CPPA). In Ashcroft v. Free Speech Coalition, the Supreme Court invalidated portions of the CPPA in 2002, deeming the prohibition of “child pornography that does not depict an actual child” overly broad and inconsistent with the First Amendment. In the majority opinion, Justice Anthony Kennedy wrote that the CPPA “prohibits speech despite its serious literary, artistic, political or scientific value. The statute proscribes the visual depiction of an idea, that of teenagers’ engaging in sexual activity, that is a fact of modern society and has been a theme in art and literature throughout the ages.”

In response to the Supreme Court’s ruling, Congress passed the Prosecutorial Remedies and Tools Against the Exploitation of Children Today (PROTECT) Act of 2003. This time, Congress narrowed its focus, criminalizing the solicitation and distribution of virtual pornography while circumventing the issue previously contested in court: the constitutionality of creating pornography without a real child. The law specifically targets any individual who:

Advertises, promotes, presents, distributes, or solicits . . . any material or purported material in a manner that reflects the belief, or that is intended to cause another to believe [it is] . . . an obscene visual depiction of a minor engaging in sexually explicit conduct; or . . . a visual depiction of an actual minor engaging in sexually explicit conduct

The Supreme Court upheld Congress’s carefully crafted revision in 2008 but refrained from ruling on morphed child pornography more broadly. Absent guidance from the Supreme Court, federal and state courts have delivered contradictory rulings on the issue.

As the morphed pornography debate moves through the courts, the threat of this new kind of virtual pornography increases. More virtual pornography floods the internet each day — according to the New York Times, nearly 70 million images and videos of child sex abuse were reported last year.

Should morphed images depicting children be treated differently from images featuring actual children? Let us know your thoughts by writing to us at [email protected]

Nicole Najafi is a freelance writer who posts witty and incisive content on Twitter, including the viral “date with a candidate” series in which she humorously summarized hypothetical dates with each of the Democratic presidential candidates. Follow her @NicoleNajafi.

If you haven’t already, listen to the latest episode of the CAFE Insider podcast: “COVID-19 & Other Contagions” and follow along with this transcript.