A great debate has gripped the Twittersphere this week. First, controversial Silicon Valley figure Shanley Kane declared it was appropriative of queer culture for women to say “daddy” while engaged in sexual acts: 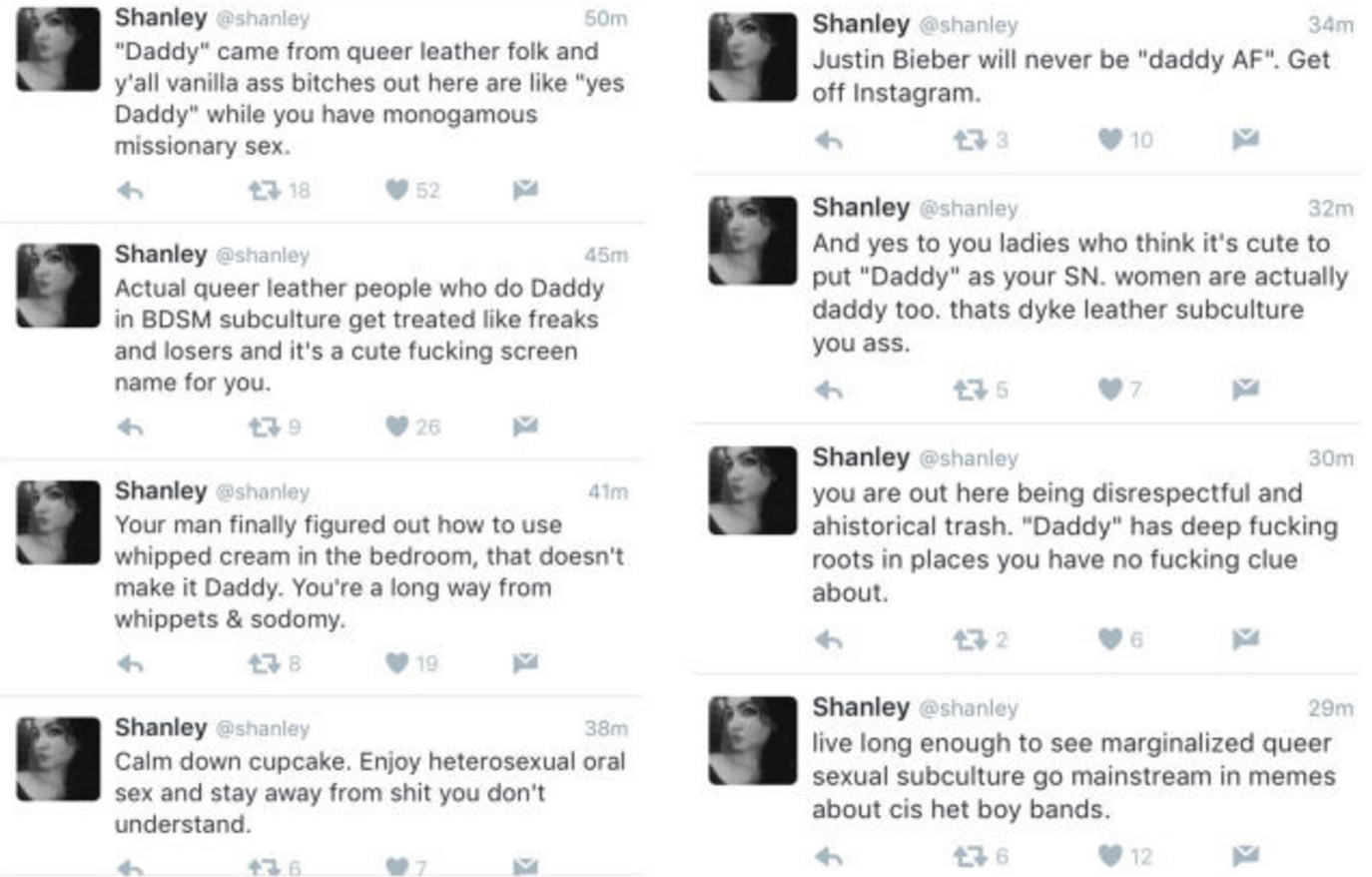 The entire thing kicked off a spirited discussion over language, sex, and subculture, but there was a voice missing that always seems to be missing: the voice of fathers.

Father culture is the most appropriated on earth, because it was the first culture. If you take the religious view of the world, you have to admit that Adam was the first father, making God the first unjust family court judge and Eve the first ungrateful, withering ex wife.

If you take the more scientific approach, you may have read theories from father’s rights scientists like Dr. Garth Mumbles, whose book “Pleistocene Fathers: Epochs of Paternity” suggest that nurturing father’s genes were passed on by the first primates millennia ago, spurring all of human evolution and development.

But father’s culture is disregarded. Our media picks out the meatiest parts like carrion around a downed carcass; dadbod, dad jokes, and “daddy” are repeatedly appropriated by nonfathers, while our struggles in family court, the billions we collectively pay out in alimony, and the ankle monitors the state declares we must wear during supervised visitations of our own children are ignored. They want our coolness, but not our struggle.

As a pundit and Father American, my achievements in predicting primaries, my original reporting, and contribution to measured discourse is ignored in the face of childless prognosticators like Nate Silver. I am met with thousands of Twitter harassers who use my own struggle and identity as a weapon against me.

When you say daddy to a loving partner or one night fling, you’re taking something from us. But forget about me for a second. For once, I want those who steal our lived experiences to look exactly who they are robbing in the eyes. The following are my friends from my civil rights group, United Father Front. I have identified them by their activist names, not their legal names out of fear of reprisals.

These men are still every bit as real as the summons that send a stark streak of yellow down every father’s back:

Crying Joe: Joe is a brother in arms in the glorious father’s struggle, and is unfairly kept from full custody of his children due to six DUIs that anyone could logically get under the right circumstances. Joe earned his activist name due to the brave onslaught of tears he unleashes in Judge Sharon Cho’s courtroom, because as fathers, we recognize that the most courageous thing a man can do in front of the heartless state is to cry.

Blackjack Barry: As a “degenerate” (Judge Eileen Hu’s words, not mine) gambler, Barry is expected to pay exorbitant alimony and child support despite the debt-rich demands of his chosen profession. As such, Barry constantly finds himself in contempt or worse yet, county jail for his inability to pay. The cruel courts of the land refuse to recognize that a gambling man simply doesn’t have the money sometimes. When you whisper “daddy” to your husband’s ear, you are taking the only thing Barry has left: our culture.

Officer Arlen: On the streets of New York City, Arlen puts his life on the line, protecting us from criminals. But we aren’t there for him when judges demand he attend anger management classes so he can see his children, simply because he’s a man of great passion. Arlen earned his nickname “Phonebook” presumably due to his photographic memory of New York’s criminal statutes. Yet he is constantly forgotten by a nation that seeks to erase our paternal heroes.

If there is a dry eye left, I fear the heartlessness of my own readers. I impugn all of you, every single one of you, to rethink “daddy.”

Some of us have forsaken love, pursuing tawdry flings on the flickering screens of Tinder and JazmineChat. We are the veterans of family court who can no more foster another monogamous relationship than a combat-scarred Marine can hear fireworks without producing a firearm and relapsing into violence. For you to take one of our words and deploy it in your loving relationships is the height of heartlessness. This isn’t a bedroom taunt for us. This is who we are. Give us this, if you have any empathy left at all.

Carl “The Dig” Diggler has covered national politics for 30 years and is the host of the Digcast, a weekly podcast on iTunes and Soundcloud. Got a question for the Dig? E-mail him at [email protected] or Tweet to @carl_diggler.