With just 87 days to go until the general election, I, Carl Diggler, veteran journalist, Beltway insider, and the man who out-predicted Nate Silver in this year’s primaries, am prepared to release my first expert general election predictions.

And in honor of my predictions, today’s episode of my podcast Digcast delves deep into the electoral map plus features an exclusive interview with Braddock, PA mayor John Fetterman, who talked to us about Donald Trump’s uphill climb in Southwestern Pennsylvania (which I rate as a Clinton Lead). Have a listen:

Subscribe to the Digcast and rate it on iTunes and Soundcloud.

Now, on to the predictions: 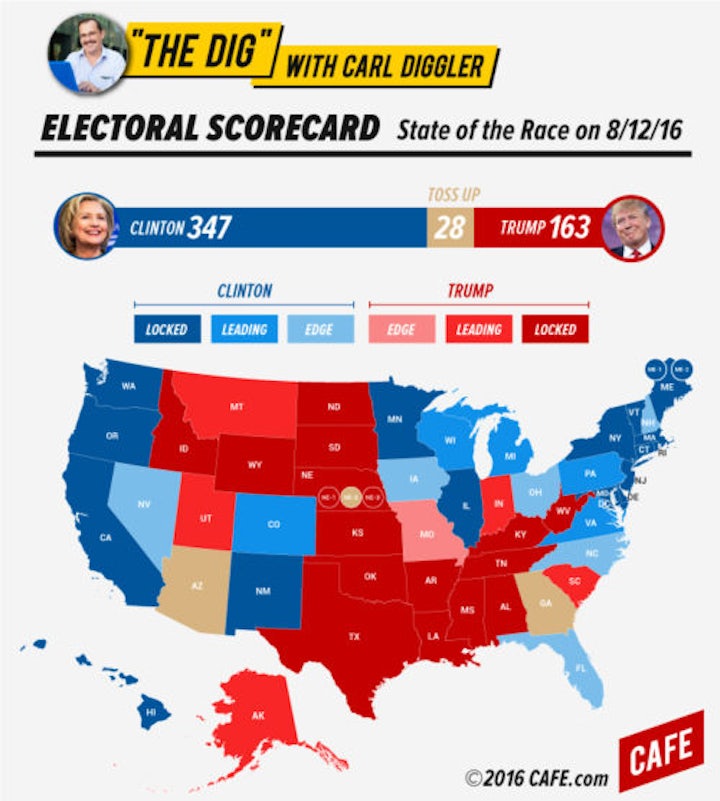 In the aftermath of multiple controversies, from Melania Trump’s plagiarism to Khizr Khan, Donald Trump starts out substantially behind Hillary Clinton in the electoral college.

My map depicts what would happen if the election were held today. A “Lock” indicates a candidate would be guaranteed to win in more or less a landslide; a “Lead” means a victory by a healthy, though not crushing, margin; and an “Edge” means a victory by a few percentage points. A “Toss-Up” is considered tied and could go either way.

At this stage in the race, states where Clinton has a Lock or a Lead add up to 269 electoral votes: just one shy of a victory. She’s gotten to the precipice of victory thanks to Donald Trump’s boorishness and downright cruelty. For instance, Hillary has virtually taken Wisconsin and Michigan off the table, as a number of polite Midwesterners there are appalled by Trump’s insinuations that Hillary is dying and the lack of sympathy he’s shown her. Whereas the preternaturally polite Midwesterner would drive to the CVS to buy a greeting card upon learning of Hillary’s terminal illness, Trump and his supporters have driven to Twitter to send cruel pictures of ovens and frog cartoons to Hillary. As they say in Wisconsin, “not a good look.”

To win in November Trump needs to run the table on swing states where Clinton has a definite, but not insurmountable edge: Ohio, North Carolina, Florida, Nevada, Iowa, and New Hampshire. He also needs to plug every hole in his boat. Reliably red states like Alaska, Montana, South Carolina, Missouri, Indiana, and Utah are still not a lock for the Donald. Utahns in particular have been turned off by his attacks on religious liberty and insults to their treasured papyrus scrolls and planet Kolob; Evan McMullin, the recently announced conservative independent candidate and practicing Mormon, will only add to Trump’s headache.

Most troubling for Trump is Georgia and Arizona are bona fide toss-ups this year. He simply has no path to victory without these states. Arizona has been red for years thanks to the substantial number of frightened, elderly Joe Arpaio voters for whom maintaining racial segregation has been a top issue. Yet the share of Latino voters has increased in recent years as conservative seniors have died off and Arpaio’s heat-baked torture camps have proven unable to eliminate minority voters fast enough to maintain the edge. Both Trump and Arpaio are in “hot water” in Arizona this year, so to speak!

One last caveat: These ratings should be treated as a snapshot of the race as it is right now, as I’ll be updating the map as conditions change. States will drift around from category to category as voters make up their minds and change their minds. A lot can happen from here to November, from Bernie revealing his endorsement was the set-up to a depraved Carrie-esque prank on Hillary to Colin Powell-mentum picking up steam. So warm up that popcorn and keep watching with the Dig!

Carl “The Dig” Diggler has covered national politics for 30 years and is the host of the Digcast, a weekly podcast on iTunes and Soundcloud. Got a question for the Dig? E-mail him at [email protected] or Tweet to @carl_diggler.