As the man who out-predicted Nate Silver in this year’s primaries, I consider it an honor to use my gut to reveal to readers where the Presidential race truly stands. I feel bad for those misinformed voters forced to rely on Nate’s adorable little numbers machine, which has so far lagged behind the Dig when it came to calling McMullinmentum in Utah and a tight race in Texas.

With just 11 days to go, there’s still a lot of uncertainty in key swing states as many voters have yet to make up their mind. Today’s State of the Race update reflects that. Yet on Election Day I will be releasing my final forecasts for all 50 states. That’s one call for each state, not a Polls-Plus call and a Polls-Minus call and a Polls-Virgin whatever. Sadly, Nate has not learned his lesson from the primaries, when he thought he could get away with calling multiple winners for every state, hoping his gullible readers wouldn’t notice.

In elections, much like in basketball, you get exactly one shot. And, like Alexander Hamilton, I am not going to miss my shot.

Here is where the race stands today: 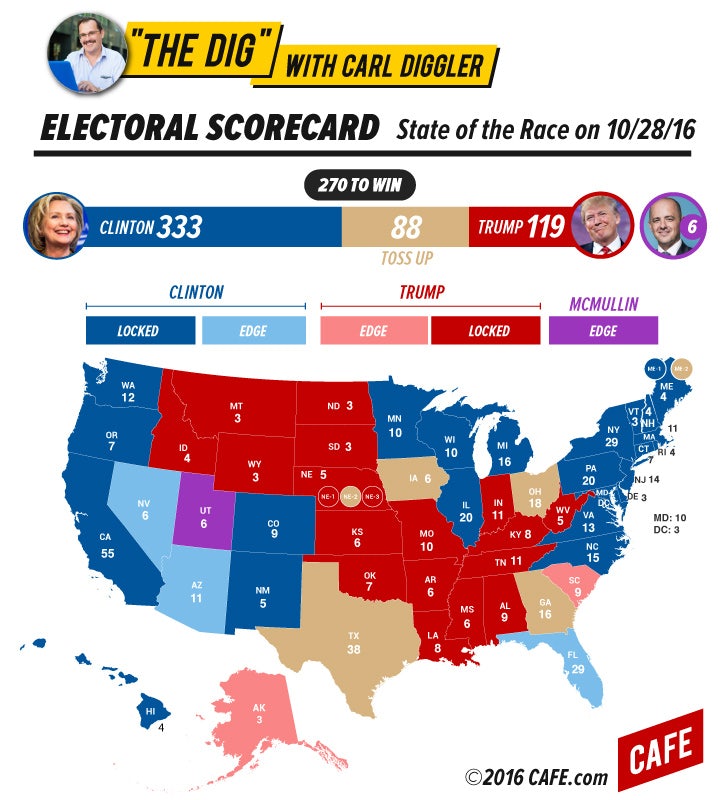 A “Lock” indicates one candidate will certainly win. An “Edge” means one candidate is on track to win, but the margin is close enough that late-deciders can change the outcome. A “Tossup” could go either way.

Now let’s take a look at some key states to watch:

Yee-haw! Git along, little college educated Republican-leaning voters who doubt Trump’s fitness for office! Two weeks ago I broke the news that Texas was no longer a safe Republican state. Now, Texas must be considered a pure tossup thanks to the perfect storm of factors that have put victory within reach for Texas Democrats for the first time since in 20 years. Latinos here are fired up and early voting at record numbers, likely due to three reasons: (1) their gratitude for Hillary saying “basta!” to Trump back in March; (2) the total success of Hillary’s heart-warming “7 things Hillary Clinton has in common with your abuela” listicle; and (3) Donald Trump’s long history of violent insinuations directed at their race. Add to that the sizable number of Texas Republicans who are still hurt over Trump calling George W. Bush’s wife and describing Ted Cruz as “a slimy autist,” and you have a recipe for a Hillary upset in the Lone Star State. Trump still enjoys structural advantages here such as a strong state Republican Party and widespread disenfranchisement of minority voters, but if these demographic trends continue, which I believe they will, it’s truly anyone’s game. Now mosey on to the next state, pardner!

While the rest of the country was rightfully horrified by Trump’s comments about molesting women, Ohio (along with Iowa) has stubbornly refused to abandon him like every other swing state. The reason is these two states have an above-average proportion of white males without a college degree, a.k.a. the Loser Vote.  This is no shock to regular readers of mine: Ohioans are NOS energy drink-swilling mounds of rage. The chief export of its economy is resentment, memes that use CGI skeletons to explain why you should be able to say the n word at work, and fake urine that can beat state drug tests. Still, there are many normal people in big cities like Columbus, Cleveland, and Cincinnati. Whether the scale will tip for the large loser and their larger kids or the Cuyahoga normies is a coin flip.

Cutting edge voter suppression techniques employed by the NC GOP made this a competitive race, but that was before Democrats got inventive.

When a Trump office in Orange County was firebombed, liberals seized an opportunity. By directly giving money to the North Carolina Republican Party, Democrats employed the Good Boy Theory of Politics, but also destroyed Trump by his own logic. This did not go unnoticed by voters.

Carl “The Dig” Diggler has covered national politics for 30 years and is the host of the Digcast, a weekly podcast on iTunes and Soundcloud. Got a question for the Dig? E-mail him at [email protected] or Tweet @carl_diggler.