We’re revamping this email with the goal of delivering more thoughtful analysis of the week’s news every Friday in your inbox. We’re happy to report that instead of a recap of the latest headlines, our new contributor Elie Honig will make sense of the most important stories at the intersection of law and politics.

Elie served as Chief of the Organized Crime Unit at the U.S. Attorney’s Office for the Southern District of New York during Preet’s tenure and as Director of the Division of Criminal Justice at the Office of Attorney General for New Jersey. He’s currently special counsel at the law firm Lowenstein Sandler, Executive Director of the Rutgers University Institute for Secure Communities, and a CNN Legal Analyst.

So look out for the new CAFE Brief with Elie Honig next Friday. We hope that Elie’s reflections on the week will help you process what’s happening.

We appreciate your readership and feedback as we continue to develop content. As always, reach out to us with your thoughts at [email protected].

This week the US opened a national security investigation into TikTok, the wildly popular short-form lip-syncing and music video app that already has more than 500 million global users. Why? Because TikTok is owned by a Chinese company called ByteDance, and lawmakers are worried that the Chinese government might be able use TikTok to gather data on the app’s 26 million American users, or suppress content that is critical of Beijing. Inside of China, in fact, there is no TikTok: people there must use a local version called Douyin, which is subject to government censors. As the alarm bells sound in Washington over yet another Chinese tech company, check out this map published by GZERO Media of where TikTok is used most, and by whom. (And we highly recommend GZERO’s must-read newsletter about global politics.) 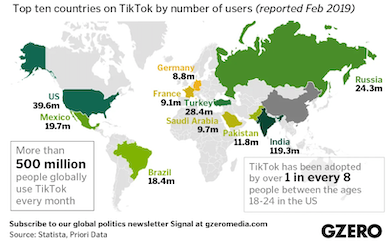 The news is breaking at dizzying speed, and we’re on top of it. Let’s dive in!

The Washington Post reported on Wednesday that President Trump asked Attorney General Bill Barr to hold a press conference clearing him of any wrongdoing with respect to Ukraine. Trump made the request of Barr around the time that the rough transcript of his July 25th call with Ukrainian President Volodymyr Zelensky was released in September. Barr ultimately declined to hold the requested press conference, but the two reportedly remain on good terms. Thursday morning, Trump took to Twitter to denounce the reporting, saying the “degenerate Washington Post MADE UP the story!” In a later tweet, Trump attacked the Post journalists by name, calling them “lowlife reporters.”

The House Intelligence, Foreign Affairs, and Oversight committees have been releasing redacted transcripts of the closed-door impeachment inquiry depositions that have taken place over the past month.

On Thursday, the committees released the testimony and key excerpts from George Kent, Deputy Assistant Secretary in the European and Eurasian Bureau at the U.S. Department of State, who told investigators that he and other diplomats were sidelined by Trump’s inner circle.

The committees have also released the transcripts and key excerpts from sessions with Ambassador to the European Union Gordon Sondland and Kurt Volker, the former Special Envoy to Ukraine.

Sondland had also submitted a four-page sworn statement revising his original testimony and acknowledging that there was indeed a quid pro quo between the United States and Ukraine. “I now recall speaking individually with [adviser to the Ukrainian President] Mr. Yermak, where I said that the resumption of U.S. aid would likely not occur until Ukraine provided the anti-corruption statement that we had been discussing for many weeks,” Sondland said.

Volker told lawmakers that Rudy Giuliani’s “negative narrative about Ukraine” was “a problem” that impeded U.S. officials’ “ability to build the relationship” with Ukraine. He added that despite warning Giuliani several times that the allegations against Biden were not credible, “Rudy was not going to be convinced” to pursue a relationship with Ukraine that did not include investigations into Burisma and the 2016 election.

Also among the batch of transcripts released were those of two former State Department officials – Marie Yovanovitch, the former U.S. ambassador to Ukraine, and Michael McKinley, a former top adviser to Secretary of State Mike Pompeo – and current Ambassador to Ukraine Bill Taylor. All three officials offered testimony that Yovanovitch was recalled from her post because of smears originating from Giuliani’s meetings with former Ukrainian Prosecutor General Yuriy Lutsenko. Taylor notably said it was his “clear understanding, security assistance money would not come until the President [of Ukraine] committed to pursue the investigation” into the Bidens.

This week, a spate of current and former administration officials refused to comply with the House impeachment inquiry, including National Security Council Attorney John Eisenberg, acting Director of the Office of Management and Budget (OMB) Russell Vought, Energy Secretary Rick Perry, former National Security Advisor John Bolton, and numerous White House advisers. To defend the non-compliance of executive branch officials, the Justice Department’s Office of Legal Counsel released a new guidance memo arguing that subpoenas from the impeachment investigation are “legally invalid” unless witnesses are allowed to bring government lawyers with them.

Democratic investigators say they will not subpoena Bolton and instead use his refusal to testify as evidence of Trump’s attempt to obstruct the congressional investigation.

Jennifer Williams, a national security aide to Vice President Mike Pence who was on the July 25th call did however appear for a closed-door deposition on Thursday.

On Wednesday, House Intelligence Committee Chairman Adam Schiff (D-CA) announced that public testimony in the impeachment inquiry will begin next week, with Ambassador to Ukraine Bill Taylor and Deputy Assistant Secretary of State George Kent scheduled to appear on Wednesday, Nov. 13. On Friday, Nov. 15, the committees plan to hear from former Ambassador Yovanovitch. Republican members of the committee have until Saturday to submit a list of witnesses they want to call in the impeachment inquiry, but the Democratic majority members will have the final say in who appears.

Though the whistleblower is no longer expected to provide testimony in person, Attorney Mark Zaid told CBS News that he informed House Intelligence Committee Ranking Member Devin Nunes (R-CA) that his client is willing to answer Republicans’ questions under oath in writing. The offer was made in response to weeks of Republican attacks on the whistleblower’s credibility. Schiff had determined that the whistleblower’s testimony was not required in light of the other evidence the committee has received and the attempts to reveal the individual’s identity. Trump took to Twitter to criticize Zaid’s offer, saying: “The Whistleblower gave false information & dealt with corrupt politician Schiff. He must be brought forward to testify. Written answers not acceptable!

The Second Circuit Court of Appeals ruled Monday that Trump’s accounting firm, Mazars USA, must turn over eight years of Trump’s tax returns to a state grand jury convened by Manhattan District Attorney Cyrus Vance. The three-judge panel unanimously rejected Trump’s argument that as president he is immune from criminal investigation while in office. Trump’s attorney Jay Sekulow said in a statement that the President plans to take the decision to the Supreme Court.

The New York Times’ Adam Liptak writes that based on the cases of previous Presidents Bill Clinton and Richard Nixon, “Trump will face an uphill fight in winning” his case if it is brought to the Supreme Court.

The trial of Roger Stone, a longtime friend and adviser of President Trump, kicked off this week with the introduction of evidence suggesting that Trump was personally involved in efforts to obtain Democratic emails stolen by Russian operatives in 2016. On the first day of arguments, federal prosecutors revealed that Trump spoke to Stone six times in June and July 2016, including on the day that the DNC announced it had been hacked. According to The New York Times, it was during this time that “Stone was aggressively seeking to obtain the stolen emails from Julian Assange, the founder of WikiLeaks.” The phone calls also undermine the written testimony Trump provided to Special Counsel Mueller in which he claimed that he has no recollection of talking to Stone about Wikileaks during the campaign.

A complaint unsealed on Wednesday in federal court in San Francisco revealed that the Justice Department charged two former Twitter employees with spying after they allegedly accessed Twitter’s internal systems to pass Saudi officials information on individuals critical of the kingdom and its leaders. Ahmad Abouammo, a U.S. citizen, was arrested on Tuesday. Ali Alzabarah, a Saudi citizen, fled the country and a warrant for his arrest has been issued.

“Charles Kupperman subpoena withdrawn by House as it asks judge to dismiss lawsuit over his testimony,” The Washington Post, 6/6/19

“White House official who heard Trump’s call with Ukraine leader testified that he was told to keep quiet,” The Washington Post, 11/1/19

“3 takeaways from Tuesday’s elections in Kentucky, Virginia and Mississippi,” CNN, 11/6/19

We hope you’re enjoying the CAFE Brief. Email us at [email protected] with your suggestions. We look forward to your feedback as we continue to expand CAFE content.