Like everyone else, I just can’t get enough of the swashbuckling HBO show Game of Thrones.

Sure, Khal Drogo scared the daylights out of me, to the point where I could not be in the same room as my TV during his scenes, but I am still a certified Thronehead. But I am also a bona fide political junkie! So in honor of the premiere of GoT‘s sixth season, I decided to cast this year’s sprawling field of presidential candidates — both killed-off and still-alive — in the show. 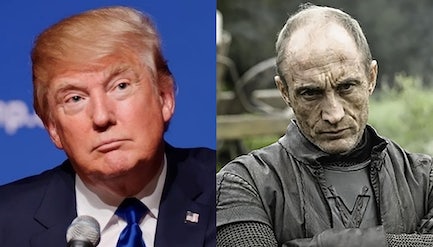 Calculating. Cold. Vicious. Donald Trump is a former ally of House Democrat who turned on his former lords for his own benefit, plunging a blade into their back while sneering “the four brave men who died in Benghazi send their regards.” He revels in the terror of his enemies, delighting as lesser lords such as Ser Jeb and Lord Cruz squirm while he verbally flays their wives. In his charge is the bastard Corey Lewandowski (Ramsay Bolton), a frightening sociopath who is virtually a son to him. 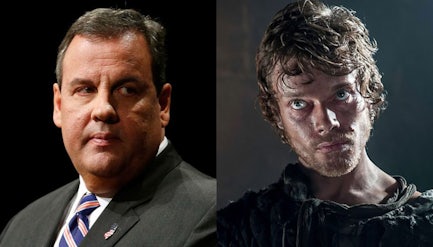 Tortured into almost total catatonia by House Trump, Reek Christie is a husk of his boisterous, braggadocios, and full-bodied former self. He acts as a servant to Lord Trump, terrifying lowborn and reporters alike with his vacant stare. Will the castrated heir of House Gabagool remember his pride and rise as Reek did? Just remember, anything can happen in a Game of Thrones… 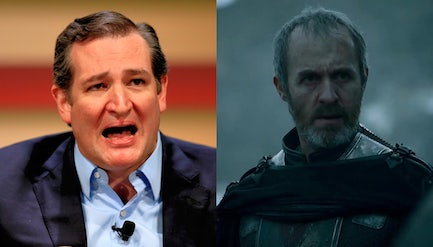 A religious fanatic disliked by almost every single person in the land, adhering to a boring old set of rules that no one cares about, and so craven in his pursuit of power that he would sacrifice his own child, Senator Cruz of Dragonstone is set to meet a tragic end as he bleeds delegates while chiding the Hand who failed him for his numerous logical fallacies. Still, Cruz is as steadfast as Stannis in his commitment and unbending in his quest to keep trans people out of bathrooms. 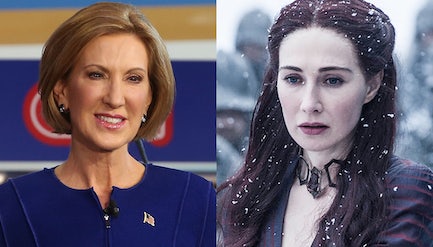 This mistress of the arcane arts left the mysterious land of Hewlett Packard after committing thousands of ritualistic human sacrifices (layoffs) for the shadowy Board of Directors. She’s come to put forth her dark vision of the world in the Republican Party — and, lucky for her, she found a man just power-hungry enough to buy into her sordid prophecies of fetal organ sales: Ted Cruz. 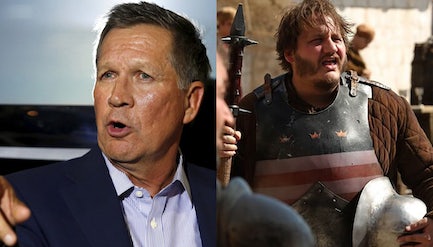 This happy-go-lucky drunk seemed at first to be a singular and brave man, but just as Kasich is constantly being swindled into white slavery and pyramid schemes, Ser Dontos was embroiled in a much larger plot. Kasich, like Ser Dontos, expects a big reward (in the form of a hot meal) for his interfering presence against hated party frontrunners Trump and Cruz. In the end, however, he’ll probably catch a crossbow bolt or brutal open container charge. 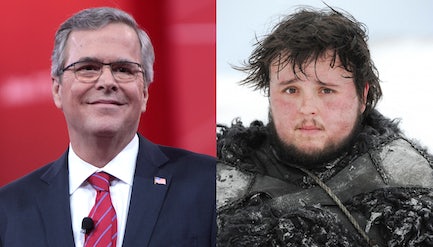 This misbegotten son of a powerful dynasty may be derided by some for his panicky nature, extreme cowardice, and complete and utter incapability to defend his wife, but he’s actually one of the strongest people in the entire field. Jeb’s bookish nature and advanced knowledge of technology like Macbook Pros makes him one of the only people who can combat the growing evil in the world, albeit while cowering under a desk. 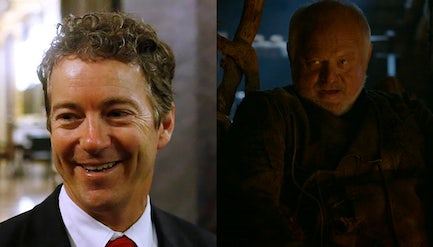 Rand Paul is a morally and physically repugnant creature who has spent his pathetic life attacking our heroic troops in the NSA in some childish, misbegotten quest for “freedom.” Rand is one peasant mob away from being chased out of D.C., forced to live in the anarchic wilderness far away from respectable society. Like Craster, Rand’s only appeal is to degenerate redditors, on r/libertarian and r/childfree, who support abandoning babies (“crotchspawn,” in reddit parlance) in the forest and question the necessity of laws against incest. 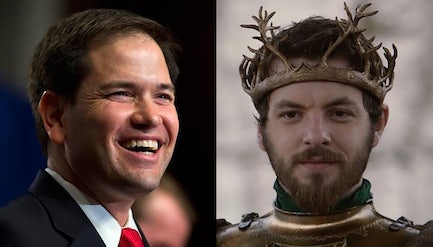 He had all the most powerful advisors, the richest backers, and mightiest warriors in the land, but then it all fell apart. Yes, the boyish would-be King Marco’s youthful impetuousness, softness, and unpreparedness got him shredded in his home kingdom of Florida after his treacherous Senate kinsman Ted Cruz said “yo hablo espanol also, por favor” at a debate. None of young Marco’s many guards from the American Enterprise Institute and House Koch could defend him from that. 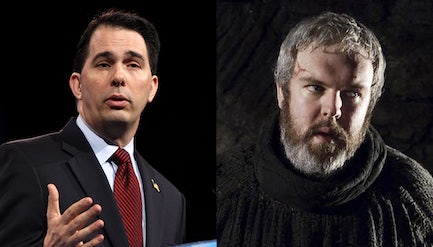 While simple of mind and seemingly only able to speak his own name, Scott Hodor is controlled into performing deeds of great courage against dastardly labor unions and pregnant teens by the mastermind Wargs of ALEC. You may see a bumbling lackwit who cannot read legislation or perform simple tasks; voters in Wisconsin see a hero with a dull mind but a strong heart. 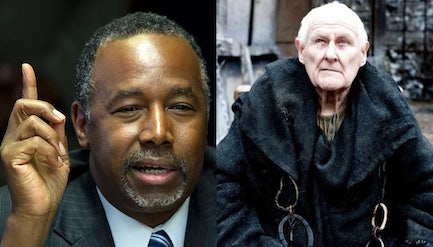 This blind man may seem confused by his surroundings but the religious texts he’s always reciting betrays an arcane wisdom of the world and its dangers. Carson’s cryptic endorsements of Trump (“if he’s bad, it will only be four years”) show a man capable of speaking profound truths to people unready to hear them.

Bernie Sanders is The High Sparrow 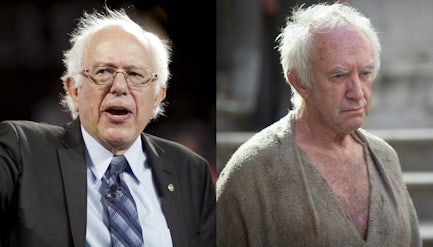 Like the High Sparrow, Bernie Sanders sees corruption everywhere, and wants to return to an older, more righteous time in his land. Both rail against opulence, stand uncompromising in their dumb beliefs, and possess a sinister hatred beneath their surface appearance as cretinous old men. They threaten to incite the rabble to rise up against the Great Houses of the Establishment (which is just trying its best to work out the realm’s problems). Worst of all, High Sparrow Bernie’s feverish quest for purity has led his fanatical followers to harass the super-delegates of King’s Landing and slut-shame, gaslight, and mansplain to Queen Cersei in the streets. 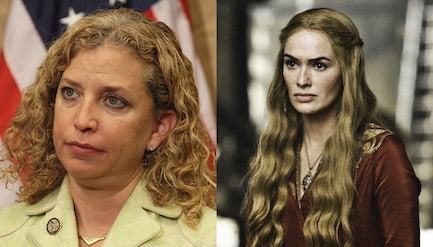 Presiding over the the wealthy and well-connected House DNC, Debbie Wasserman Lannister is not above engaging in a few political tricks to maintain power. She is, however, vulnerable to death threats from Sparrow Bros, and will have to resort to the most loyal soldiers in the Democratic Army to retain power, such as Ser Howard of Vermont (a.k.a., the Mountain Who Screams). 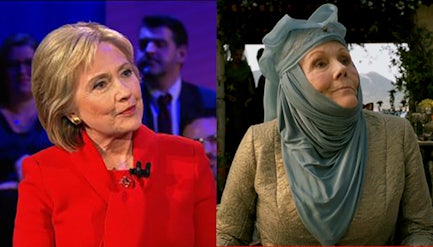 Like Olenna, who guided the Tyrell clan to becoming one of the richest houses, Lady Hillary has built a fortune from her speeches at the Iron Bank while committing just a few assassinations along the way (as erstwhile foe Maester David Brock tried to expose in the Highgarden Project). She shrewdly married her daughter Lady Chelsea into the wealthy House Mezvinsky and kept a lid on the off-script outbursts of her bumbling Lord Bill Clinton (Mace Tyrell). But although Lady Hillary thinks the Oval Throne is finally within her grasp, she is poised to be arrested any day now by the Gold Cloaks for the crime of having a private Maester (e-mail server) and sending illegal crows to Ser Sidney Blumenthal. 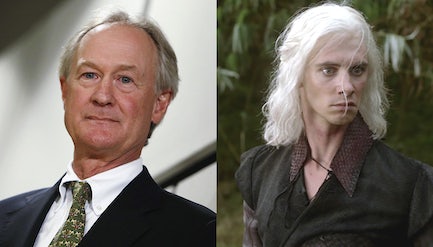 This feeble, conniving coward betrayed the honor of his warrior father Lord John Chafee and was forced into exile from his family realm of Rhode Island. Much like Viserys suffered his brutal demise after insulting the scary alpha male warlord Khal Drogo, the dastard Lincoln was poured a crown of molten humiliation, courtesy of Jim Webb at the first Democratic debate. 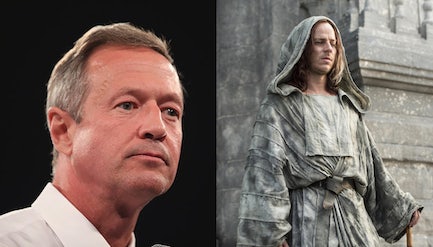 This figure seemed to come from nowhere, say practically nothing, and confuse everyone. He hides his face in the crowd, able to perform his machinations via the disguise of no one at all knowing who he is. In his shadowy home of Mary-Land, he rules over some sort of dark castle where he gaslights everyone. Who knows what this mysterious man’s motivations are? I sure don’t. And I don’t want to be the one to find out. 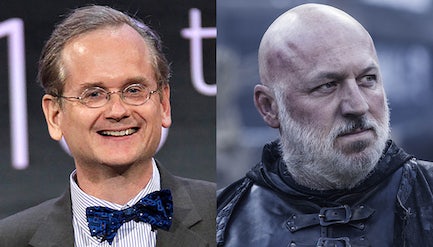 This pasty sack of quivering cowardice had the gall to defy his superiors and demand an undeserved podium at a debate where he could spread his treasonous message of banning money. Thankfully, the putrid, process-disrespecting waste that was Lawrence Lessig was rightfully put to the sword by Lord Commander Wolf Blitzer.

The Benevolent Order of Heroic Moderates 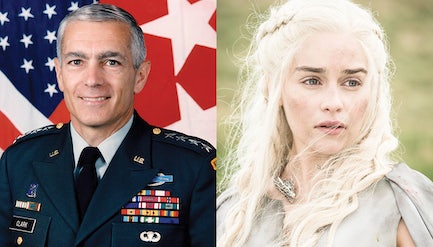 With Lady Hillary chained in the dungeons for her illegal crows, the throne of House Democrat will be claimed by its rightful leader, the dashing, silver-haired Wesley Stormborn Clark, the Unburnt King of NATO, Breaker of Russians, Father of Kosovo. Like the willful and beautiful Dany, Wes Clark’s heroic reputation was forged in flames. He faced down the Russians, as Dany did the Khalasars, threatening to rain fire over two continents if Russian tanks dared occupy an airport in Yugoslavia. He learned to rule in the chaos of the 2004 Democratic Party Presidential primary, where he bravely sacrificed himself to break the chains of the foul usurper Howard Dean. I can see it now: the dashing four-star general flying into the Democratic convention on the back of a dragon, alighting on the stage, and announcing to the acclaim of all, “I’m Wesley Clark, and I’m reporting for duty.” 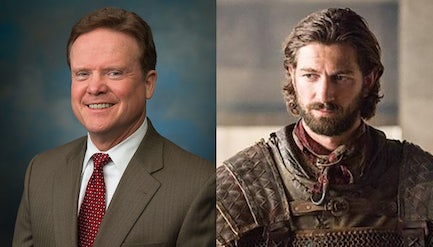 Muscular and brave Jim Webb is Wesley Clark’s loyal partner and confidante, sworn to defend to both him and the discourse with his very life. Like Dany and Daario, Wesley and Webb were once enemies, one being an Army man, the other a Navy man. But Webb’s quick charm and toned body won over the famously discerning Wesley. These two brawny heroes have become inseparable, to the point of sleeping in the same chamber as military men are wont to do in the interest of safety. One day soon, Wesley Clark will rise to take the Oval Throne, and Jim Webb will be there by his side, potentially as his running mate in an Army-Navy unity ticket. 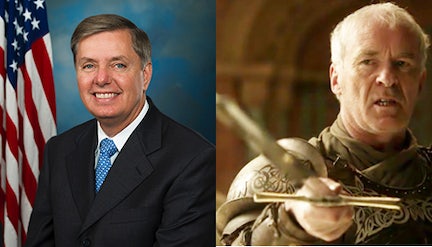 Lindsey Graham is a brave Senate warrior who has always put his country and his centrism before partisan politics. When the arbitrary and ungrateful lords of House Republican told loyal Ser Graham to retire from the Presidential race, this hero of the Battle of the Gulf threw his sword at Lord Trump’s feet and went looking for an righteous moderate to serve. I believe Ser Graham will find such a leader in fellow war hero Wesley Clark, whose cause Graham will champion against the sadistic usurper Trump. 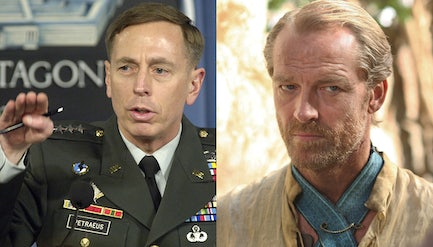 Shamed for his deeds in Westeros (sleeping with his biographer), Ser David is listless and drifting in the wind — until he meets legendary hero Daenarys Clark. His brilliant military strategies (such as bribing al-Qaeda to fight ISIS) make him indispensable. But he has a past. Will his path to redemption be found as an advisor to a Clark/Webb super-ticket? Or will his moral failings get the best of him once again?

I, Carl of House Diggler, am Tyrion Lannister. 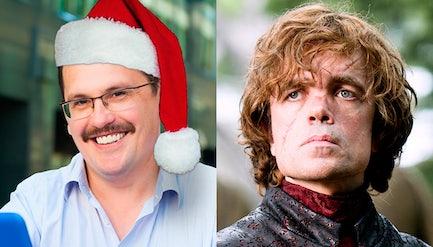 I’ve been mocked my whole life for my physical ailments (Hellenic Inner Ear Syndrome, Hapsburg Diarrhea, Leaky Back Disorder), but my wit and courage has earned me the plaudits as the unlikely wisest man in the entire kingdom. Like Tyrion, I enjoy a bit of Michelob Red from time to time and am constantly being dragged into fraudulent kangaroo family courts where I leave my prosecutors speechless after my epic monologues about protections for fathers in the Constitution.

ex-Mrs. The Dig is Shae

Once she and I loved each other, but after being bribed by a corrupt family court magistrate to testify falsehoods such as “Carl is an incompetent oaf”, and that we had “irreconcilable differences”, our flame extinguished. I hope it was worth it. You can have her, Tapper.