Note: Cafe’s chief political columnist Carl Diggler, regular author of The Dig, has taken a mysterious leave of absence. Filling in for him today is Marshall Harford III.

My oppressive editors at CAFE still cling to the slim hope that bourgeois cretin Carl Diggler is alive and well. I would not concern myself with such fairytale notions if they did not affect me personally.

I have been press-ganged into filling in for Carl’s insipid Friday mailbag, the propaganda organ this parasite uses to communicate with the brainless reactionary slobs who concern themselves with nothing more complex than which oppressor “won the week” in the kabuki theater of bourgeois politics. Apparently my colleague “Professor” Jeff refused to do this again, and so the duties have fallen on my humble shoulders. Sure, I  could be writing another genius monograph about something of vital proletarian interest, like explaining why Christmas is fascist or proposing how to torture fauxialist class traitor Bernie Sanders, but instead my enlightened superiors prefer that I devote my unparalleled mental talents to answering Cletus in Pigvomit, Alabama’s pressing question about which Harry Potter character Ted Cruz would be. I will nevertheless do this task, if only to further deflate the myth that the free market rewards intelligence. But first, today’s song.

Now on to your questions.

How I enjoy the trifling nonsense in your columns. I appreciate how your piffle is written at a fifth grade level so it can be comprehended by a mind as feeble and incurious as mine. Do tell me what you think about Donald Trump’s plan to expel all Muslims? 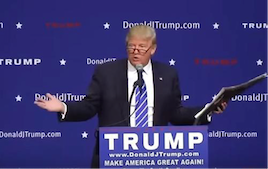 How fortunate that one of Carl’s mouth-breathing sycophants would address the very issue I wanted to write about today!

Donald Trump is a Fascist, and as an Antifascist, I am his sworn enemy. I have long been in the streets bravely carrying on the fight against Fascism wherever it dwells. Growing up, whenever my family would stay in the Emperor’s Suite in a Trump Hotel, I would make it a point to defecate in the bed, urinate in the rare fish tank, and smear beluga caviar all over the bowling lane. How’s that for room service, Il Duce?

In fact, last summer, right after Trump called Mexican immigrants rapists, I hustled over to Trump Casino in Atlantic City for a little “direct action.” I sat down at the highest stakes blackjack table and used my awesome intelligence to count cards and slowly bleed the fascist dry. Later, I smashed their no-smoking policy at the private Celine Dion concert my friends and I reserved.

Sadly, not everyone is brave or enlightened enough to join me in the fight against Donald Trump’s Fascism. I imagine that Hitler 2’s genocidal policies endear him to a segment of society consisting of inbred class traitors. If we’re going to beat these pigs we must accelerate the path of destruction:

We must allow the inevitable election of Trump to take place. Once in office, we must flood his Gestapo’s tip line with thousands of “traitors” who are obviously innocent. The mass incarceration of previously complacent class traitors will galvanize them into the cadres of revolution, led by those such as myself. Only then will we have the numbers to take down this Generalissimo.

Oh Lordy how I look forward to you telling me how many Wacky Pinocchios Chris Christie got at the debate. Though I must say I am more enamored by your co-worker Marshall Harford III, whose bold feminist praxis and unwavering commitment to Revolutionary ideals I find extremely alluring. Him being such a universally beloved and respected thoughtleader please ask Marshall to tell us about all the radical holiday parties he’s been invited to this year.

Whoa, that letter was pretty hot. I’m used to inspiring this level of passion in females, however. Here are the important parties I will be attending:

n+1 office party – This may be awkward, as I was forced to sever my connection to this once-venerable publication after I realized my obscene intelligence and overbearing charisma was making the females in the office uncomfortable. Fortunately I’m told that once it became apparent I would be attending, several employees canceled their RSVPs, probably so they wouldn’t embarrass themselves in my presence.

A Very Verso Christmas – Oh great, Christmas with the Kranks. I just pray I won’t be buttonholed by a big sloppy Zizek, spilling eggnog on his stretched-out Hanes gray tee he got from Michael Moore’s garage sale, while he begs me in that insufferable Sylvester the Cat-meets-Boris Badenov voice to explain Lacan to him again. I expect to leave early.

National Lawyers Guild non-denominational holiday gathering – Not looking forward to this one either, as these folks are constantly begging me to use my Ivy League-caliber intelligence to become a lawyer and help them with their cases. Sorry, friends, but as a radical activist I prefer to be on the other side of the attorney-client relationship.

My editor forwarded me the following letter, which apparently appeared in our office in an unmarked envelope one morning:

There you have it, folks. This is the sort of sub-mental C.H.U.D. who enjoys the work of the late Carl Diggler. Do not expect me to fill in for him again.

Editor’s note: If you have any information regarding the whereabouts of Carl Diggler, please e-mail his editor at [email protected] or notify the police.

Marshall Harford III is a Millennial thoughtleader and radical Anarchist from Westchester County, NY. A graduate of Harvard University, he has written for several avant-garde revolutionary publications. Follow him on Twitter at @MarshallLawless.