As we near Thanksgiving I’m thinking a lot about what this feast means to us. Yes, it’s a great excuse to pig out and build a great buzz, but it’s also a celebration of gratitude and togetherness. If a certain Mr. Trump is reading, that’s right, I said togetherness. I worry that we in this time of terrorism, partisanship, and unreformed entitlements focus more on what makes us different than what we have in common. But when I look to the past, I feel hope.

The memories of the famous fourth Thursday of years past make me recall the times when we set politics aside, broke bread, and remembered what made us who we are as Americans. I hope these memories of The Dig’s favorite Thanskgivings can give you a bit of an insight on what it’s like when there’s mutual respect, admiration, and plain old fun from one side of the aisle to the other. 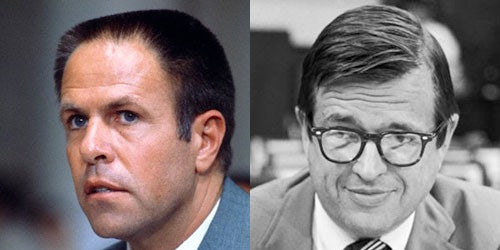 This was the earliest Thanksgiving I remember. It was one of the rare holidays Colonel Dig Sr. was home for, but man did he make his presence known! As always, there were notable guests. White House aides Bob Haldeman and Chuck Colson enjoyed the bird and fixings with us, and while I was young, I couldn’t help but notice them slip a long sheet of paper to my dad, who in a rare moment, laughed hysterically. “They have no idea what will occur to them,” I remember him saying. These were all serious men, but they knew that on a day like that they were entitled to some laughs. To this day, I wonder what silly prank or ribald joke was detailed on that paper, but I suppose that’s between Dig Sr. and his friends. The freshly released William Calley was in attendance as well, because let it be known Colonel Dig doesn’t leave any men behind, especially veterans with no place to go on the holidays.

Maybe I should say El Thanksgiving-o? This one definitely had a south of the border flavor, as former Panamanian leader Manuel Noriega and Colombian Pablo Escobar shared the table. Pilot Bobby Seale was there too, but it wasn’t about the guests. Sure, Pablo gave me a handsome cash gift that was opportunistically spent on an Apple I and a veritable treasure trove of C-SPAN archives. But the greatest gift was that it was the first Thanksgiving Dig Sr was at since ‘76. It was a herculean effort too, considering all the biplane flights he was taking that year.

Yes, some may say that this emotionally impactful day was marred by the later ignominy of the guests, but for one, these were men my father knew in some work capacity, and I’ll leave it up to other journalists to judge them. For two, the warm laughs between these men and my father, the genuine gratitude, and heartfelt goodbyes at that table showed me that at the end of the day, we’re all just people. You may tear someone down for having the wrong letter at the end of their name in congress or having a bumper sticker you don’t like, but when you’re eating and laughing, you see the good that exists in everyone.

My first “adult” Thanksgiving was one to remember. Reagan has long been a favorite president of mine, not out of any ideological leanings, but because of his ability to bring people together. Luck would have it that we were blessed with the presence of two of his top aides in Colonel Oliver North and Frank Carlucci that night! These coworkers of my father brought the color that night. Colonel North walked around the house asking my father if he had handcuffs and blindfolds, probably a little office joke between them. Frank, who felt at home wherever he was, sat at the table in his bathrobe and regaled us with stories of Patrice Lumumba’s death. It was a decided departure in tone from my last Thanksgivings, but the serious matters and juicy gossip at hand made me realize I was finally grown up. I tried to get in my points about Geraldine Ferraro’s ideal hairstyle and was in turn shouted down by one of Colonel North’s detail-rich stories, but it was a growing experience to remember.

“Dig” man on campus! Living in the NYU dorms reminds me of my time at Wellesley, in the first and only class to admit men (guess we were a little macho for the ladies to handle!). These were heady times in the midst of the Gulf War when everyone looked to the likes of “Stormin'” Norman Schwartzkopf and “Scud Stud” Arthur Kent for moral guidance. At the Thanksgiving table in the dorms we were all scared of the prospect that Hussein would launch missles laden with chemical weapons at the Eastern Seaboard. So we partied like it was the end of the world, and — with all due gallantry — after our liquor-fueled bacchanalia, A-6 Intruders weren’t the only things dropping loads. Colin Powell drew a line in the sand, and some folks crossed it that night.

In the 90s this swinging bachelor had the honor of being invited to White House insider Dick Morris’ Thanksgiving bash. Here was a guy famous for bringing the best and the beautiful together to kick off their shoes and cut a rug on the shag carpet of his Georgetown efficiency. I was sworn to secrecy that night regarding the guest list, but I can tell you that these fellows — all high-ranking officials in the Clinton administration and Republican Congress — knew how to treat a woman from her head to her toes.

At the height of my career I had a huge apartment in D.C. and was receiving regular scoops from the White House about such juicy matters as Russ Feingold’s non-white son and Paul Wellstone’s bisexuality. I was the toast of the press corps, and I had the guest list to prove it: Richard Armitage, Bob Novak, ex-Mrs. Dig, and our then-unborn son Colby. I won’t reveal the particulars, but let’s just say that after this night, I scooped the entire press corps with an interview with an up and coming soldier — AND role model to young ladies — Lynndie England.

The divorce was hard on me, and losing custody of my son even harder, but I was happy that I still had friends in a town as cold as D.C. My good friend Jeff Gannon, then an up-and-coming blogger (still a new profession, back in those days!), invited me to Thanksgiving with a coterie of Congressmen I had always respected. I passed the turkey, stuffing, and cranberry sauce with Mark Sanford, Anthony Weiner, Mark Foley, and Larry Craig — all gentlemen who seemed to understand what I was going through and had nothing but sympathy for this guy who was just unlucky at love. Sure, you had strict constitutionalists, liberal Democrats, and moderate Republicans all at one table, but the votes, letters, and committees attached to their names all seemed to melt away that night. What I saw that night, my friends, was Washington at its best.

I got full custody of my son Colby on Thanksgiving for the first time this year, and I thought we should spend it just one-on-one, doing what I had always wanted to growing up, which is going on a father and son camping trip. Col. Dig Sr. used to talk about sleeping out under the stars but his work kept him too busy.

I drove us up to a campsite in the Adirondacks, Colby glued to his Gameboy and me glued to my Blackberry. I got upset at him for playing Nintendo while we should have been bonding, but to be honest, I myself was wrapped up in Herman Cain’s latest gaffe or whichever campaign was winning or losing the week.

Once we got to the campsite our respective devices died, and Colby screamed like you wouldn’t believe. But I told him to sit tight because I had three volumes of The Making Of The President to read to him, that would take his mind off the MySpace and Angry Birds. Well, he just screamed even louder.

Night fell and I built a fire with the Duraflames so we could cook the turkey and stuffing. Colby wasn’t talking to me, but I figured he would after smelling the feast I had prepared. The only problem was I had forgotten to pack ice in the cooler, and all our food had gone bad. Colby didn’t say anything, but our growing stomachs told the whole story.

I guess necessity is the mother of invention, because right then I took a couple extra tentpoles, tied some rope to them, and told Colby we’re going fishing.

We walked to the river just a few hundred feet from our camp and threw our lines in. We stood there like two complete idiots, waving around strands of rope and flashlights in the shallow hope that a fish would be dumb enough to bite it.

Yet for a minute Colby didn’t seem to care about his Gameboy or about alimony or about Mime Craft. He was asking his dear old dad how to toss his line, or wriggle it to attract the fish. Then it hit me that he — like me — had never been fishing with his old man before.

You won’t believe this, but somehow we managed to catch a decent-sized trout with our 88′ fishing lure. It was on Colby’s line, and he carried it triumphantly back to camp, where our fire had gone out and our tents had been ransacked by either bears or vagrants. But I put together another fire and stuck the fish on a makeshift spit while shooting the breeze with my son about all sorts of stuff, like whether Nancy Pelosi still had the authority to lead a minority caucus, or personal “guy stuff” about how to find certain anatomical parts.

It was midnight when we chowed down on the catch of the day, and Colby fell asleep not long after I told the spooky story of what would happen if the Kurds ever lost their resolve. I carried him to the remains of our tent, then stepped out into the night to have a cigar — just like my old man would — and ponder if there would ever be a bigger winner of the week than me.