We’ve had a series of debates so far in the Democratic primary. There has been a good bit of substance and a good bit of attention. The Las Vegas debate last week garnered 20 million viewers, the most of the entire cycle.

But there have also been low moments. It’s to be expected, especially depending on whom you’re rooting for, to be occasionally irate, surprised, confused, offended, or underwhelmed by an answer or a question in one of these debates. But this far into the season, with the field winnowed and Super Tuesday almost upon us, I had hoped not to have a particular repeated reaction to the proceedings. As I tweeted Tuesday night, “I would like to cringe less during debates relating to who will become the most powerful leader on earth.”

That doesn’t seem like too much to ask. I do not expect every minute during a hard-fought and high-stakes primary debate to be uplifting, edifying, or inspiring. But I do want to cringe less. According to one dictionary definition, “to cringe” is “to experience an inward shiver of embarrassment or disgust.” How many times did you cringe during the South Carolina debate? I know this is not the most important thing and comes off a bit curmudgeonly, but that’s how I’m feeling this week.

To be clear, I respect and admire in different ways every remaining candidate. I feel the same way about the moderators, several of whom I know personally. But Tuesday was a perfect cringe storm.

The shallow format and unenforced time limits made for especially jarring television this time around. Candidates not only struggled to get across sweeping policy proposals in 60 seconds or less, but also failed to abide by the time limits. Some candidates kept to the rules; most blustered past them; everyone interrupted. The format (and maybe the 11th hour desperation for airtime) fueled rudeness and crosstalk, moderators invisible at one point when it seemed everyone on stage was shouting at once. Cringe.

And then of course every wide shot revealed a smattering of candidates awkwardly raising their hands to be acknowledged and called on, as if in geometry class. Cringe. If we could make one reform, could we please eliminate the Hermione hand raise?

Then there are the gaffes. These are to be expected; human beings misspeak. But did one candidate drop an F-bomb under her breath? Did another say “home-boner” and suggest that half the country’s population had been killed by guns? Did yet another make an obscure reference to “naked cowboy”?

I like humor. I like it very much. But if you’re not funny, don’t force it and especially stay away from bad jokes. One more thing: if you’ve never really shown much humility, don’t try to be self-deprecating on the national stage for the first time, at age 78. That looks insincere, falls flat, and what else? It makes people cringe.

In this contest for leader of the free world, one expects more dignity. I agree with those who have suggested exploring alternative debate formats. I agree also with those who have found the one-on-one lengthy CNN town halls to be more informative about candidates and their visions. I don’t know what the perfect format is. But I do know this: we have a clown in the White House already; we don’t need a clown show to select his opponent in the general election.

Thanks for indulging my rant. I will try to be less cranky next week.

While Justice Sotomayor’s viral dissent had to do with civil procedure — specifically, her concerns around the Court becoming “all too quick to grant the Government’s ‘reflexive requests,’” — the underlying substance of the case in question had to do not with process but policy. The case, Wolf v. Cook County, was the latest in a series of cases concerning the Trump administration’s attempts to impose what amounts to a wealth test for immigrants.

The idea of a wealth test as a basis for legal immigration goes to the heart of our longstanding national identity as a beacon for the tired, the poor, the downtrodden. Should citizenship be reserved for immigrants who have shown that they are capable of supporting themselves?

The ruling in Wolf comes on the heels of a similar Supreme Court decision issued last month allowing the Trump administration to move forward with their plan to deny green cards to immigrants who are likely to need public assistance.

The new rules, which were released in August of last year and went into effect on Monday, represent the conclusion of a multi-year effort on the part of the Trump administration to rewrite the so-called “public charge” rule.

Immigration officials have long considered the likelihood of an immigrant becoming a “public charge” when making determinations about citizenship — but that loosely defined phrase has been subject to different interpretations over multiple decades. The relevant law, “The Immigration and Nationality Act of 1952,” states:

However, formal guidance from the Immigration and Nationalization Service in 1999 clarified “public charge” to mean an individual who is “primarily dependent on the government for subsistence, as demonstrated by either the receipt of public cash assistance for income maintenance, or institutionalization for long-term care at government expense.” In practice, “primarily dependent” has meant immigrants who receive more than half of their income from cash benefits, like Temporary Assistance for Needy Families (TANF) or Social Security Income (SSI).

With its new policy, the Trump administration has moved to significantly broaden the scope of immigrants who could be considered “public charges.” As of Monday, individuals applying for legal permanent residency must demonstrate that they “are self-sufficient, i.e., do not depend on public resources to meet their needs, but rather rely on their own capabilities, as well as the resources of family members, sponsors, and private organizations.”

The definition of “public charge” now includes any noncitizen who has received benefits including cash programs, healthcare or housing assistance, or food assistance programs like SNAP — for more than 12 months over a three-year period. The rule also takes into account “factors such as age, employment history and finances to determine whether a noncitizen might become a public charge in the future.”

While the Supreme Court has repeatedly stayed injunctions from lower courts — most notably one in New York which sought to prevent the policy from being implemented nationally — they have not yet ruled on the constitutionality of the wealth test itself.

As the immigration debate plays out at the ballot box and in the courts, what do you think of a wealth test? Should an immigrant’s level of financial self-sufficiency be a factor in determining whether they can become an American citizen? Let us know your thoughts by writing to us at [email protected], or reply to this email. 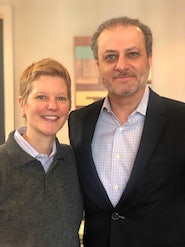 Cynthia Deitle is this week’s guest on Stay Tuned. She is the Director of Civil Rights Reform at the Matthew Shepard Foundation, an LGBTQ advocacy organization dedicated to eradicating hate. The former Chief of the FBI’s Civil Rights Unit, Deitle served 22 years as a special agent specializing in civil rights, victims’ assistance, and hate crimes.

During Deitle’s tenure at the FBI, she was also tasked with investigating cases of police brutality. As she tells Preet:

You investigate just horrible crimes [that are] are committed by government actors, state actors, law enforcement officials, and you realize they’re people, they’re humans. There are going to be human beings that join law enforcement agencies that will do bad things to people and they need to be held to account. They’re no different than a bank robber or anyone else who commits a crime. They have to be held to account for what they did.

Listen to today’s episode, the bonus, and share your thoughts by writing a review or emailing us at [email protected]

Rex Chapman, a former NBA basketball player who has been outspoken about his struggle with opioid addiction, posts social media content that is often moving, provocative, and hilarious. Follow him @RexChapman.

If you haven’t already, listen to the latest episode of the CAFE Insider podcast: “Time’s Up for Weinstein & Jail for Stone” and follow along with this transcript.