My first note of the new year is not about Iran or impeachment. It is about a personal regret.

After I was fired by the President in March of 2017, I set about writing a book. In the weeks after I left office, there was interest from various publishers and literary agents. You should write a book, they said, and we will sell it. The interest was certainly driven by the drama of my termination and I suppose the book that people imagined was one that would tell some inside stories, unveil some secrets, settle some scores. Also — as events rapidly unfolded in the nation’s capital, at the FBI and DOJ — maybe a book that would directly criticize, attack, and analyze current crises, that might directly take on Trump too. That’s the kind of thing that sells. But that is not the book I wanted to write.

It was a particular kind of book that I had in mind – about justice, about the rule of law, about the crime stories that had occupied me, about the heroes I had known and loved in the SDNY. As I ultimately wrote in the preface to Doing Justice, “Sometimes the best way to address current events is to recall first principles.”

Two people are most responsible for my being able to write and publish the book that was in my heart. One was Peter Gethers, a longtime editor at Knopf, whom I had become friends with some years earlier. The other was his boss, Sonny Mehta, the editor-in-chief of Knopf and an international legend in publishing. Sonny met with me personally, offered deep encouragement, and ultimately gave the green light for Knopf to bid on my book. Most importantly, he shared my vision for what the book should be.

This would be thrilling in any circumstances, but it was especially so because Sonny was a hero of mine. It is impossible to overstate how large a figure this physically slight man was in literary circles. He was just the third editor-in-chief in Knopf’s history. He published nine Nobel laureates. He was the hand-picked editor of presidents and prime ministers. One author described him as the “Fred Astaire of editing.”

And so, I wrote, and Peter edited, and Knopf published. As Doing Justice launched successfully last March and hit the New York Times bestseller list, I heard from a very happy Sonny, who was traveling in India. He wrote a kind note of congratulations and proposed getting drinks. He signed off, “Look forward to raising a glass with you on my return.”

There was something else about Sonny, which made the relationship and the support special to me. He was an icon in the Indian American community, a different kind of role model. He was born Ajai Singh Mehta, in colonial India. He reached the top in a white-dominated field first in the UK then in the US. He had no peer. On top of that, Sonny was an urbane, cosmopolitan, literate and literary figure. He had a concrete track record but also a hazy mystique. A decade before any book was on the horizon for me, in a room full of prominent Indian Americans at an event back in 2010, his was the hand I most wanted to shake. I was still in my first year as U.S. Attorney and I was a bit nervous to meet him. I remember he was as warm as he was refined.

Last week, at age 77, Sonny Mehta passed away. He died of complications from pneumonia. He was rightly honored in life, and the raft of obituaries marking his death pay better tribute than I can offer here.

Above all things, Sonny was a lover of books. He made it to the global pinnacle of a cut-throat industry even amid a seeming worldwide ebb in the reading of books. His love seems almost quaint.

He may have loved his scotch and his cigarettes, but books were what gave him life. Here’s how he put it upon accepting an award in 2018:

“Reading is how I spend most of my time, is still the most joyful aspect of my day. I want to be remembered not as an editor or publisher but as a reader.”

So what is my regret? It’s that I never did get that drink with Sonny, never did raise a glass after the book. His schedule, I’m sure, was even more hectic than mine. But you get busy with work and travel and other commitments and you figure there will always be time later. If not this month then next month. If not in 2019 then certainly in 2020. Sonny passed away before 2020 could come. And so I never got one more evening of advice and encouragement, never got the chance to express in person my profound thanks for his faith in me.

My chief resolution for the new year is never to have that type of regret again.

GIVE THE GIFT OF INSIDER 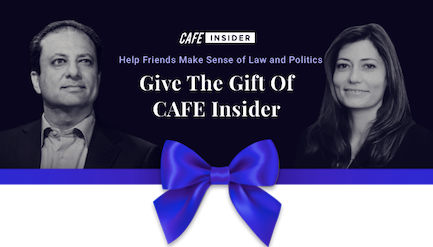 You joined CAFE’s pursuit to better understand the rule of law and the principles that form the foundation of democracy. Now help your friends make sense of law and politics too.

The killing of General Qassem Suleimani has revived the debate about assassinations as an instrument of U.S. foreign and national security policy. Suleimani, who President Trump ordered killed last week, led the Quds Force of Iran’s Islamic Revolutionary Guard Corps—a U.S.-designated Foreign Terrorist Organization that is also an official branch of Iran’s armed forces. Does killing a terrorist who is also a state actor violate the U.S. ban on assassinations?

On this week’s episode of CAFE Insider, Preet and Anne broke down the debate, noting that the Trump administration is calling the strike on Suleimani a “targeted killing” of a terrorist, whereas the critics of the lethal operation refer to it as an “assassination” of the second most powerful person in Iran.

President Gerald Ford first banned assassinations in 1976 following the publication of the Church Committee’s Interim Report, which concluded that “assassination is incompatible with American principles, international order, and morality” and “should be rejected as a tool of foreign policy.” The Committee had investigated US-supported assassination plots against foreign leaders and uncovered that the CIA tried to assassinate Fidel Castro of Cuba and Patrice Lumumba of Congo, and assisted dissidents in plots to kill Ngo Dinh Diem of Vietnam, Rafael Trujillo of Dominican Republic, and General Rene Schneider of Chile.

The ban was reaffirmed by the Carter administration. The latest policy is contained in Executive Order 12333, signed by President Reagan on December 4, 1981, which states: “No person employed by or acting on behalf of the United States Government shall engage in, or conspire to engage in, assassination.” The term “assassination” is left undefined.

As noted recently in the New York Times, “decades of legal interpretation and precedent-setting have evolved into a legal understanding of assassination that is intricate, disputed and narrower with each administration.” Generally, assassination involves the unlawful murder of a targeted person for political reasons. But what killings are properly deemed political? Is the ban limited to peacetime killings or does it encompass killings during wartime? Are killings in self-defense prohibited? And to what extent is it a ban at all if it can be easily revised or rescinded by the President?

At least since 1989, the government has taken the position that the ban on assassinations was not intended to limit lawful self-defense options and thus it is consistent with the United Nations Charter for the president to use lethal military force against combatant forces of another nation or a terrorist whose actions threaten U.S. national security.

Each administration has constricted the types of killings that qualify as assassinations, especially in the aftermath of the 9/11 attacks. President Bush concluded that it was lawful to kill someone under certain conditions when they posed an “imminent threat,” which was defined broadly to include a terrorist’s history of violence as a sufficient showing of a continuing threat. Under Obama, the Office of Legal Counsel concluded that “killings in self-defense are not assassinations” in a memo addressing the legality of killing Shaykh Anwar Aulaqi, a U.S. citizen who was a senior leader of an Al Qaeda affiliate group in Yemen.

Today, House lawmakers will vote on a War Powers Resolution meant to curb the president’s power to undertake military actions against Iran without congressional approval. But the resolution, even if adopted, will do nothing to clarify the thorny questions raised by the murky policy on assassinations. Should Congress pass a hard rule specifically defining and banning assassinations on foreign soil or should the president retain flexibility to carry out such killings in the interest of national security? Let us know what you think by writing to us at [email protected] or reply to this email. 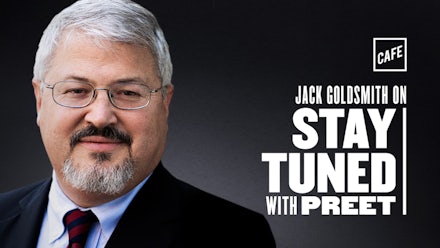 This week’s guest on Stay Tuned is Jack Goldsmith. He served as head of the Office of Legal Counsel during the George W. Bush administration. He is currently a professor at Harvard Law School, co-founder and active contributor to Lawfare, and author of In Hoffa’s Shadow. So, given his deep expertise in national security law, what’s his takeaway from the lethal strike on Suleimani? He tells Preet:

“[The] bigger lesson is the law permits the President of the United States to do all sorts of horrible, unthinkable things that he shouldn’t do and that presidents normally would never think about doing… these precedents are frankly quite scarier under President Trump.”

If you haven’t already, listen to today’s episode, and share your thoughts with us by writing a review or emailing us at [email protected]. 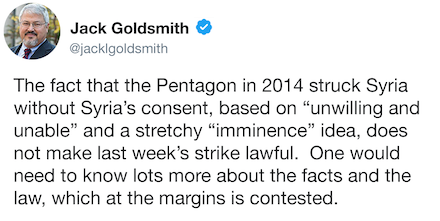 If you haven’t already, listen to the latest episode of the CAFE Insider podcast: “What Quds Go Wrong?” and follow along with this transcript.