Note: Cafe’s chief political columnist Carl Diggler, regular author of The Dig, has taken an indefinite leave of absence. Filling in for him today is radical Anarchist and Millennial Marshall Harford III.

My editor has press-ganged me into filling in for Carl Diggler, a decrepit and senile man who I presume has died of old age. (With any luck more Boomers and Gen Xers will soon follow his lead, enabling us Millennials to craft the Marxist paradise I have long planned.) While this alienation of my labor will one day be punished, I will condescend to this fascist diktat — for now.

I don’t read Carl Diggler or any living writers over the age of 30, but I’m told he concerned himself with meaningless bourgeois politics. As an Anarchist and a genius I see through this Capitalist farce where every few years the proletariat selects the people who will oppress them. Meaningful political change doesn’t come from voting; it is exacted through violent revolution, sex, and my brilliant thinkpieces.

Nevertheless I’ll play along with the spectacle and “rank” the so-called “Democratic” candidates for President. Here they are, from worst to best:

Lesser minds at reactionary, rightwing publications like Jacobin and Pravda have fallen head-over-heels for Bernie Sanders, the self-proclaimed “socialist” candidate. However, as a true radical Marxist, I can tell you that Bernie is no socialist at all. He supports Israeli apartheid, drone bombings, and the network of prison camps for children known as public schools. He promises a guaranteed minimum income administered by the state — the very thing we’re supposed to be smashing! He even says he wants to make America more like Denmark (Nazi sympathizers). Clearly, the fauxialist Bernie Sanders is somewhere to the right of General Franco, and his fascist Presidency would make us pine for the days of George W. Bush.

Yet even if Obergruppenführer Sanders were a socialist, that wouldn’t be good enough to earn the support of genuine radicals. Those of us in the Marxist-Leninist-Harfordist tendency (the one true path) recognize that fomenting violent class struggle to liberate the means of production from the bourgeoisie is the only policy that matters. Everything else is a distraction. Bernie talks a big game about “helping” poor families go to college (to be indoctrinated with Capitalist propaganda) or get health care (from know-nothing doctors who are biased against MDMA), but what’s he going to do when the Revolution starts? Do you think he’d be out in the streets throwing bricks or cowering behind a copy of his precious Glass-Steagall Act, wetting his pants and begging riot cops to spare his life?

Finally, Bernie Sanders is like 90 years old. Sorry, Bernie, but the revolution isn’t going to be led by geriatrics who left Brooklyn because it was too edgy and raw for them. It’s going to be led by Millennials, the most radical generation to ever exist, and the handsome genius writers who constitute their natural leaders. 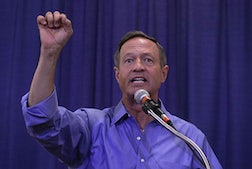 This Little Eichmann from Maryland ranks second by virtue of not being Bernie Sanders. Beyond that, I neither know nor care who he is. I suppose his tearful pleas that he was only doing his job at his trial before the proletariat court will be memorable some day.

Hillary Clinton, despite being a center-right corporatist, has my endorsement for the Presidency. With her experience she can effectively manage the American Empire and thus heighten the contradictions of capitalism, something that will ultimately bring about the violent revolution and dictatorship of the proletariat we need. We may have to wait through one or two terms of a Clinton Presidency for the conditions to be right, but I’m confident that by 2023 at the latest, most major cities will be under the control of worker’s councils directed by Millennials.

Thus, it is imperative that we as radicals support Hillary with all our might. We should make phone calls, knock on doors, and donate our allowances to her campaign while savoring the thought that the ruling class plots its own destruction.

Incidentally, my father, through his work as a corporate attorney, has deep personal connections to the Clintons and can assist with her election. According to him we should direct our energies to smashing the state’s fascist restrictions on foreign lobbyists donating to super PACs. By repealing the Bribery Act and electing Hillary Clinton President we Anarchists can strike a fatal blow for the people’s revolution.

Editor’s note: If you have any information regarding the whereabouts of Carl Diggler, please e-mail his editor at [email protected] or notify the police.

Marshall Harford III is a Millennial thoughtleader and radical Anarchist from Westchester County, NY. A graduate of Harvard University, he has written for several avant-garde revolutionary publications. Follow him on Twitter at @MarshallLawless.