Hey, Dig-heads. It’s been a long week, but I’m finally ready to open up about my traumatic experiences in Russia.

First, I’d like to give a heartfelt thank you to the outpouring of support I received during my captivity. I can’t be grateful enough to my father Colonel John Diggler, who went toe-to-toe with Vladimir Putin for my release, and to my hero Senator Lindsey Graham, who sent me this personal letter of support (if you can’t make out what it says, scroll below it for the text): 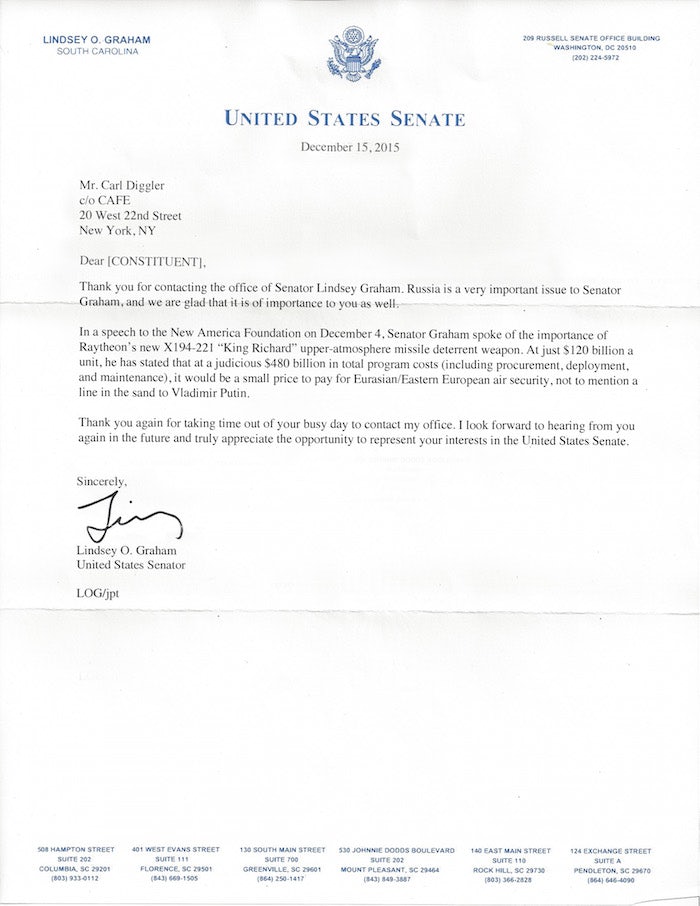 Thank you for contacting the office of Senator Lindsey Graham. Russia is a very important issue to Senator Graham, and we are glad that it is of importance to you as well.

In a speech to the New America Foundation on December 4, Senator Graham spoke of the importance of Raytheon’s new X194-221 “King Richard” upper-atmosphere missile deterrent weapon. At just $120 billion a unit, he has stated that at a judicious $480 billion in total program costs (including procurement, deployment, and maintenance), it would be a small price to pay for Eurasian/Eastern European air security, not to mention a line in the sand to Vladimir Putin.

Thank you again for taking time out of your busy day to contact my office. I look forward to hearing from you again in the future and truly appreciate the opportunity to represent your interests in the United States Senate.

Needless to say, I’ve been moved. I guess that Senator John McCain and I will see each other as fellow survivors rather than just respected journalist and respected maverick the next time we meet.

In honor of my return, here’s a classic rock song you better believe I’ve been listening to on repeat the past few days:

And thank you to my colleagues Prof. Jeff and Marshall Harford III for filling in for me and handling the mailbag while I was gone. But Dig Papa’s back, baby! Now for your questions:

Hey Dig, I’m glad you’re back alive and well. That whole thing was… weird. Why did you go to Syria in the first place?

– Michael in Portland, OR

After my girlfriend kicked me out of our dorm room just before Thanksgiving, I did some deep soul-searching in a hotel lobby. There I realized that the only way I was going to get over this traumatic break-up was to double down on my career as a Polk Award-nominated newsman and snatch the next big scoop out of the Middle East. So I booked a one-way ticket to Turkey and crossed over the southern border.

One thing I’ve noticed that’s missing from all this Syria coverage is no one really knows what the mood of the electorate is. Here in the U.S., we have daily polls, consumer surveys, and my pal Frank Luntz’s insightful focus groups; all of which keep us informed about what the man on the street is thinking. And you can see the result: a healthy, vibrant democracy where politicians always know just the right things to say to voters.

In Syria, however, where so many different groups are duking it out for control, we don’t even know if people prefer ISIS, Assad, the al-Nusra Front, or whoever! So my plan was to travel to ISIS-held territory and conduct focus groups in Raqqa to find out what issues your average Syrian thinks are important, if the Caliphate’s policies are connecting with voters, and where Abu Bakr al-Baghdadi’s approval ratings are at. Sadly I never got further than a few yards past the border checkpoint where, while haggling over the price of a shwarma stick (vendors over there are even stingier about white sauce than the carts on 57th Street!), I was apprehended by Assad’s goons. I guess that goes to show that I should leave the high-risk polling to gurus like Frank and Mr. Zogby!

Uh… since when do you speak Russian?

Katherine in Bangor, ME

My dad Col. Dig Sr. forced me to learn the language growing up, and boy did I hate it. I have no idea why — he was probably planning a father-son trip to the USSR, I guess — but around age 10 the lessons abruptly ended after I heard him on the phone screaming at my tutor something like “abort it, he has no use as a sleeper.” I was glad to be done with Russian, but all those morning classes I missed at Wellesley sure proved dad wrong about my sleeping ability!

Carl, my co-workers and I have been following your saga all week. What was it like in Russia? Were you in prison? What did they do to you?

Speaking as someone who’s been through a divorce, a failed Clinton impeachment, and a narrow Polk Award loss, I can say that being imprisoned by Russian intelligence was the fourth worst experience of my life.

They locked me in some sort of cage-like hotel room. I guess it was more of a suite, actually. Now that I think about it, it was bigger than my old apartment in Park Slope. Plus it had a private bathroom. There I was forced to subsist on cheap potato vodka and a cabbage-and-fish stew with pierogies and sour cream, rich high-fat foods meant to make me sluggish and let my guard down.

They confiscated my Blackberry and demanded I explain my connections to Lindsey Graham, my dad Col. Dig, and my colleague Professor Jeff. They said Jeff was a criminal pervert who spread lies about the wives of various high-ranking Kremlin officials, and they wanted me to reveal his weaknesses. But I refused to tell them a damned thing about Lindsey Graham and Col. Dig.

Ultimately, they wanted me to betray my country, but having grown up under the stern-yet-protective gaze of Col. Dig, I was mentally prepared to withstand this torture. I played the fool and acted like I didn’t actually know anything about politics or really have any connections with high-ranking government officials, that I was just a shallow Beltway hack pretended to be a savvy insider. They took the bait hook line and sinker.

They tried to conscript me into being a news analyst for Russian state propaganda, reporting on the winners and losers of the week in Moscow. But after just one screen test they realized I was just too smart to accede to their demands. Yep, I outfoxed them all right, and admitting they were beaten they voluntarily returned me to the State Department.

On the plane ride back to New York I was thoroughly debriefed. Clearly I had a lot of valuable intel to give to my government, because after just ten minutes of interrogation, my handlers couldn’t handle hearing the terrible truth about Russian intelligence and had to calm themselves by spending the rest of the plane ride watching the Minions movie with me (great flick! I think Santa might have it on Blu-Ray for Colby ;)).

Throughout the whole ordeal, I kept my sanity and my hope alive by the thought of my perfect round son Colby, and my dad Col. Dig, who I knew was fighting for my release. Dad, son: I love you. Thanks.

Dig welcome back! Or should I say dasvidaniya? LOL. I felt my anchor come dislodged in your absence. I was drifting around a meaningless sea, on occasion bumping into lonely vessels and resetting my course a few degrees that ultimately amounted to nothing in the beige purgatory I was cast into.

Anyway, I decided to stop moping and do something about it! I remembered the excellent words you’ve had for Alan K Simpson and thought “what would the Dig want me to do?” So, I pieced together the clues you left and ventured to St. Petersburg to rescue you. Let’s just say, things went in a crazy direction. After a hastily arranged marriage, a man in a sauna gave me a uranium-tipped umbrella and told me to pierce the skin of Dmitri Medvedev–

David, I’m going to cut you off right there. St. Petersburg? Were you going to look for me or just go sightseeing? I was in Moscow, you cretin. With friends like these, who needs enemies? Good gravy. Next time you travel to another continent to rescue me from foreign captivity how about you download Google Maps first.