It takes a big man to admit he’s wrong. On Friday I predicted that Bernie Sanders, on the weight of his legions of paid online harasser Bros, would win the Nevada Caucus. What I hadn’t taken into account was that my massive exposé on the Bernie camp’s digital dirty tricks would go so viral that it would cost him the election. Mea culpa, folks.

I did, however, correctly predict the South Carolina Republican primary results, where I saw Marco Rubio surging to 2nd and Jeb Bush suffering a humiliating 4th place finish.

On Saturday Jeb, scion of the Bush family, slight outranker of Neil and Marvin, the Great Right Hope, finally dropped out of the Presidential race. For months the former Florida governor had suffered brutal attacks from Donald Trump and responded to each one with his trademark grin and subtle headshake that screamed “Everyone can see just how foolish you look right now, sir.” But the South Carolina results showed that GOP voters in this cycle crave more than a laid back cool guy who spends millions on flashy attack billboards on Rural Postal Routes all over Iowa.

Flashy Jeb’s shock and awe campaign simply didn’t stand a chance against Trump and Ted Cruz’s weighty Muslim and Latino genocide proposals containing the details that policy-oriented Republican voters crave. Put another way: in 2016, decent human beings that also happen to be alpha males are out. Jeb’s passion and energy so terrified political neophytes that they smeared him as a “cuckold” using rude frog-based cartoon drawings. In any other year, we’d probably be talking about how President Jeb’s passionate kindness would affect his prosecution of a third Iraq war, a possible invasion of North Korea, and a pinpoint nuclear attack on Damascus. Instead, we got Sailor_Moon1488 conjecturing about the man’s bedroom proclivities.

Saturday night, as I watched Jeb’s concession speech, I felt a little misty-eyed as this patriot talked about his war hero dad and beautiful wife who almost certainly still respects him. But then I glanced at my Twitter feed, which was full of friends from both the right and left “snarking” on Jeb right at his time of need. At the end of the day we’re all human, and we should be celebrating each other’s positives instead of making mean hashtags calling good folks like Jeb a “loser” and “beta f*g blue pill cuck.” For goodness sakes, the man has children. So in that spirit of brotherhood, here are my favorite wins from the Jeb Bush campaign:

6. Attempting To Get Donald Trump To Apologize To His Wife

After Donald Trump pointed out that Jeb Bush’s beloved wife Columba is Mexican, all eyes were on Jeb. You could cut the tension in the air in Simi Valley with a knife that night. America watched and gripped as Jeb stood up tall, put his finger in the air and said “uh, absolutely, he should apologize to her.” They saw the resigned grimacing and silence of an alpha when Trump denied he had anything to apologize for. And it scared them.

In some ways, Jeb never really recovered from this. After he did the honorable thing by folding his arms and being content with how bad Trump was making himself look, people saw a dark side to the once-avuncular governor. His stuttering attempts to retain his wife’s honor and his clumsy silence when he was rebuffed reminded people more of Tony Soprano than Ronald Reagan. For a candidate who banked on looking presidential, he looked anything but.

5. Accidentally Flushing Glasses Down Toilet In Front Of Media Scrum

Right before the Iowa caucuses Jeb was riding high on a second wind. After all, longtime rival Donald Trump no-showed a debate, which emboldened Jeb to really express himself now that he no longer feared getting physically struck by another candidate. With no flinching, purple-faced grimacing, or repeated mumblings of “you don’t know how bad you look right now,” the SS Jeb! seemed to be sailing straight. The burst in confidence unfortunately caused Jeb to field questions from reporters in front of an open restroom on his campaign bus. What happened next doomed him in Iowa:

Jeb, who is one of the most notorious “nervous sneezers” in politics, ripped a classic sneeze while The New York Times’ Michael Barbaro was asking him about his use of the video app Vine. Jeb’s glasses flew off his face, and he attempted to catch them. However, instead of securing his trademark frameless glasses, the Floridian ended up batting them into the toilet. Assuring reporters “everything is fine, this is why I love campaigns, it’s all unexpected, I love it brother,” Jeb made his way into the bathroom to fish his lenses out. Unfortunately, an errant Zune hanging out of his pocket dropped hit the “FLUSH” button on the airline-style toilet, causing Jeb’s glasses to be evacuated into a bag of human waste in the undercarriage on the bus. Frank Luntz says that focus groups saw Jeb as “less confident” since this incident.

In a spat with Donald Trump over ISIS, Jeb raised his voice. His interruption of “well, I’m talking now” seemed to surprise even him, as his eyes became the size of dinner plates. He knew he had displayed too much of his alpha side once again. This may have been the point of no return for Jeb, as it locked him in as the rogue macho candidate who was never afraid to clarify when he was speaking, and it lost him the all-important NatSec Mom voting bloc. 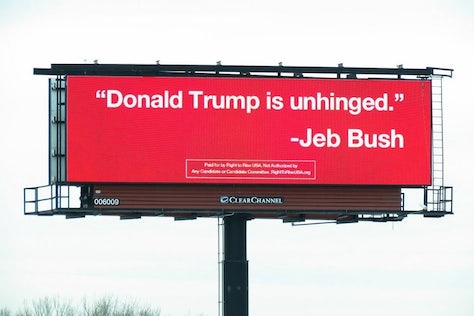 Going into Iowa and New Hampshire Jeb was on message. His billboards were omnipresent. Every reporter, campaign staffer, and voter traveling through Iowa couldn’t miss these $823 million strong-worded condemnations of rival Donald Trump. They ranged from the succinct (“Donald Trump is not the president” -Jeb Bush) to the comical (“Being the president isn’t a TV show” -Jeb Bush) to the thought-provoking (“I was Governor of Florida” -Jeb Bush). However, it cost him. The emphasis on billboards caused the Bush campaign to neglect the all-important “sign primary,” an unofficial race that nonetheless serves as a bellwether. Simply put, Jeb put so much time into this that he didn’t consider plastering roadsides with paper signs. He was soundly out-signed by Cruz by a margin of 5-1, and Trump 3-1. The winner of the sign primary has gone on to win the caucuses in the last 6 election cycles.

It was classic Jeb: the governor was literally too high-minded, hoping that the heroin and meth-addled slobs of these two states could keep from nodding off at the wheel long enough to see his pronouncements. He bet on his fellow man, and he bet wrong.

Jeb’s Super PAC Right to Rise doled out a cool $103 million on this flashy ad showing a hot-stepping dancer strut his stuff over brutal headlines like “Rubio Flip Flops Again!” and “Syria.” The ad was intended to take Jeb’s one-time protégé down a peg while consolidating the all-important Capitol Steps Fan voting bloc. Yet Jeb’s attack ad backfired in a big way when voters decided they had had enough of mean-spirited political parody songs like “Marc The Knife,” “Proud Marco Keep On Runnin’,” and “Goodbye Rubio Tuesday.” Lesson for future candidates: the razor-sharp parodists at SNL and the Capitol Steps may be able to get away with such hilarious zingers, but voters aren’t looking to elect a class clown. 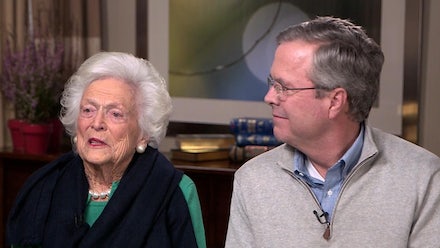 While this was a truly sweet vignette into a mother-son relationship we all should be jealous of, it just wasn’t the right time. Jeb stating that he sleeps in the same bed as the venerated matriarch Barbara Bush when she travels with him may have played well in August, when viral moments are more likely to catch on, but it just went unnoticed. Similarly, Barbara stating that Jeb makes “feminine mistakes” to CBS’ Norah O’Donnell may have dazzled before Iowa, where voters are particularly keen to snappy, sassy old women like they see in their favorite shows “Two Broke Girls” and “Waitress Apartment,”  but it doomed him in New Hampshire, where maternal alienation has caused a large bloc of voters to become sovereign citizens.

There are just too many memorable moments from Jeb’s campaign to go over in detail here.

There was the time Jeb was bit on the finger by a tiny dog in Dubuque and refused to go outside for two weeks for fear that he’d see the same dog again.

And the time Jeb’s right lung collapsed after he was passed on the sidewalk by someone smoking a cigarette and tried too hard to affect a cough to show his disapproval of tobacco use.

The time Jeb couldn’t sleep after watching “Les Miserables” in bed with his mother, causing him to be ill-rested for the debate where he delivered his infamous “9/11 had a net positive. It brought us all together” gaffe.

And who can forget the time Jeb bought tight bicycle shorts that showed the outline of his genitals and rode it on TV over the objection of his advisors and got so humiliated by some teens yelling mean things to him that he had a panic attack and refused to leave his hotel room for another two weeks?

Yes, Jeb Bush’s aggressive campaign brought viral moment after viral moment, but ultimately Republican voters wanted a candidate who could acquire a majority of delegates. Whether Trump, Cruz, Rubio, or John Kasich, whoever does that will almost certainly win the nomination. While the rest of us keep following this fascinating and historic race, Jeb and his wife will be back in Kennebunkport for a few weeks of rest and relaxation and highly personal struggle sessions with his family in the Bush clan’s ancestral home. With Jeb out of the picture, the only real question left is who will carry the Bush banner into 2020: family cutup Neil or dark horse Marvin? All I can say is: stay tuned!