Going into Super Tuesday V: The Establishment Strikes Back, my prediction record for this year’s primaries stands at a towering 87%. Meanwhile, calculator coward Nate Silver, who was too afraid to forecast half the races, has correctly predicted just 41 of the 75 (you don’t get credit for questions you leave blank, Natey) — a flunking 55%.

But while Election Deserter Nate cuts and runs yet again (he didn’t even try to forecast the all-important Delaware primary), I’ll be improving my record by calling all 10 of today’s big races!

The bottom line: Trump is going to make a clean sweep of all five states today, while Hillary is poised to win all but one. Which one will it be? Let’s go to the map! 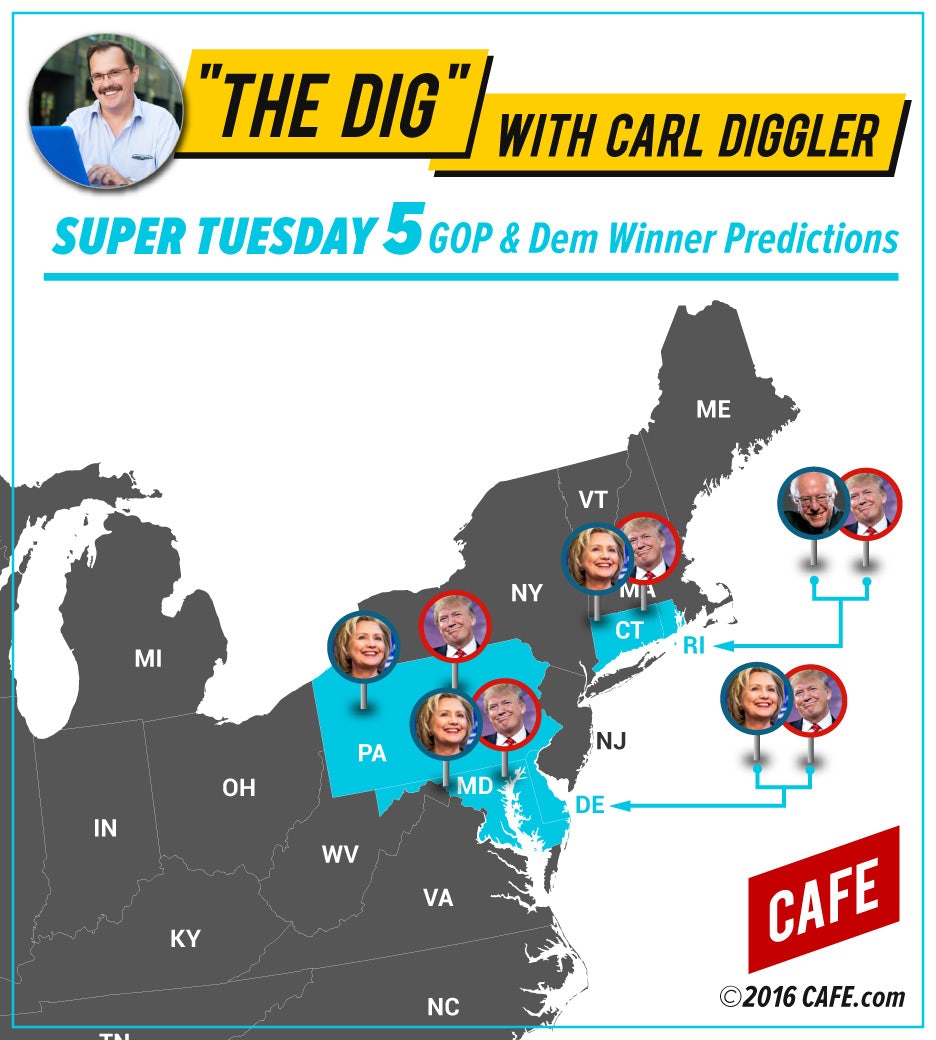 Sorry Bernie! The closed primary, which was designed to prevent doxing, is going to spell out a definitive loss.

Hillary has shifted in Pennsylvania from her 2008 support base of sullen white gun owners to a new base of urban voters. That means that while she’ll lose a tiny bit of support that propelled her to victory against Barack Obama, the new 2016 Hillary will no longer say racially loaded terms suggested by Mark Penn, earning her the support of urban voters who she couldn’t previously count on.

On the Republican side, look for Donald Trump to crush it. Pennsylvania Republicans are one of two types: Philadelphian old money who can trace their ancestry through any book about the Triangle Trade, or dirt-eating clods who live in ramshackle tin houses and blame Black Lives Matter when they’re ejected from their town’s only methadone clinic. The latter group has clear reasons to support Trump, but the former group represents a coalition of moderate and inbred Republicans who are coming around on the boisterous billionaire. His lead will be “yuge!”

That’s just a little joke for my friends who have viewed The Wire, a transcendent show which follows the true lives of people in “B’more, Murdaland” — and believe me, they don’t sugarcoat anything. I personally have seen every episode twice. Have you seen it? I can’t recommend it enough. It’s a gritty experience that’s just real. Other shows tell you who the good guys are and who the bad guys are, but The Wire is the only viewing experience that fully captures the complex morality inherent to “the streets.” Have I mentioned that you can watch it with director’s commentary? Seriously, I cannot believe you haven’t seen it.

Sanders stands to make this a close race — and he probably would win today if he hadn’t made the fatal error of saying the Sandy Hook massacre was a good thing. People in Connecticut have long memories, and they appreciate Clinton’s frankness on gun control (“It’s time to get the guns outta here, buster”) and her campaign’s savvy use of the mothers of slain children. Western Connecticut’s high concentration of investment bankers and the plummeting T-levels of Sanders supporters after his New York defeat also work to Hillary’s advantage. It could be a nail-biter (this is, after all, Ned Lamont Country), but Hillary is favored. Conversely, Republicans in the Keystone State, who are resisting gun control in the wake of Sandy Hook, are keen on Trump for his promise to investigate any false flag operations.

Rhode Islanders are famous for making awful decisions. This tiny state sent feeble bird-creature Lincoln Chafee to both the Senate and the Governor’s Mansion. So it’ll be no surprise when Li’l Rhod-y wastes its precious delegates on Bernie’s lost cause. From the folk music burnouts in Newport to the RISD students creating avant garde misogynist art, these low-information voters clearly aren’t aware of the consensus among pundits that Bernie has been toast since his crushing 1-point loss in the Iowa caucus. On the Republican side, the New England GOP’s reputation for genteel racism spells a Trump victory.

Delaware stands to be John Kasich’s best state, owing to the fondness of mid-Atlantic voters for strange, rambling stories. Not too long ago, GOPers here nominated Christine O’Donnell, a Tea Party favorite famous for having dabbled in witchcraft. In his life on the rails, the vagrant Kasich has learned a lot about “bad juju” from fellow drifters, and he’s been sprinkling his town hall pitches with factoids about which amulets to wear to ward off sheriff’s posses and how to use potions to distract convenience store clerks. But Trump hit back hard, calling Kasich’s eating habits “disgusting” and circulating photos of the Governor putting an entire fish in his mouth, then pulling out just the bones.

Trump is favored here, as is Clinton. Nate Silver, meanwhile, is AWOL.