Oi, Digheads! Another week of raw power politics is behind us. At the Veep debate Mike Pence looked pretty vacant when asked about Donald Trump’s personality crisis while Tim Kaine said “God save the Queen… Khaleesi!” But now let’s have a little fun time. Get off the phone, sedate yourself with martini (or three), and kick out those jams as the Dig answers your letters.

You may have noticed a certain punk tinge to my discourse this morning. That’s because I interviewed former Dead Kennedys frontman and onetime Presidential candidate Jello Biafra on the Digcast this week. True to punk form, Jello got a bit crass about Simpson-Bowles, but in the end had to concede that the most hardcore thing to be is a No Labels moderate pundit. Have a listen:

Now on to your questions:

What ever became of your valorous Pundit’s Duel with Nate Silver? Has he taken the conditions of the turning down the challenge by refusing to prognosticate?

Nate Silver! It’s been a while since I’ve heard that name. Let’s see if he’s still attempting predictions: 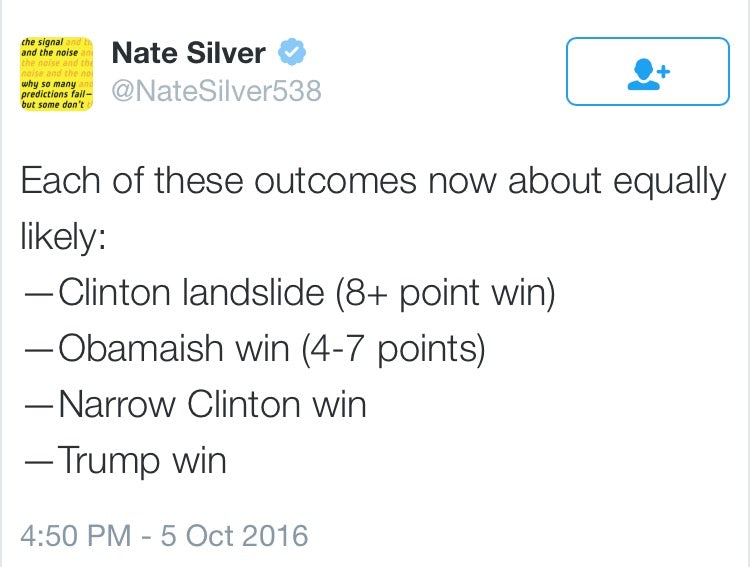 Wow. Thank you, Nate. Really groundbreaking stuff. So you’re saying that Clinton could win by a lot, a moderate amount, a little, or lose? My god. I guess that Nate isn’t trying to return to the world of predictions after all, because that’s about as much of a prediction as a crop duster is a fighter jet. Nate is, however, making a grand splash in the world of cowardice. While a total failure in prognosticating about results without his precious numbers, our fussy friend is making grand innovations to the field of bedwetting, abdication of responsibility, being frightened, and wussing out. Future “forecasts” from Nate include:

-Hillary has a chance of contracting a head cold in the next year.

-The next president will see their approval ratings go up, go down, stay the same, or fluctuate.

-There will be likely be voting on Tuesday, November 8.

This man is more pee-er than seer. Good luck, Nate!

What was going on with Trump’s PTSD comments and the general media reaction to it? Watching the whole video, it seems Trump picked his words kind of poorly, but wasn’t calling people with PTSD weak as some made it out as. Will this be a major albatross around his neck as we’re now just one month from voting day?

As someone who has suffered from Online PTSD dating back to Usenet flame wars in the early 90s, all the way to current trolling campaigns, I found no way in which Trump’s comments were innocuous. I see the frog avis every night when I close my eyes. I try to sleep and just hear a voice commanding, “fill my hole, Dig!” Sometimes I leave all the lights on in my apartment because of the terror I still experience. Does that make me a coward, Mr. Trump? Does it make me weak? No, it does not. Shame on you.

I was so excited to learn that you, my hero, shares one of my all-time favorite passions: PUNK ROCK MUSIC! I have always considered myself a child of punk, mostly early West Coast outfits like the Dils, the Germs, the Bags, and X, of course. So imagine my surprise to learn that you’re close personal friends with Jello Biafra, a legend of S.F. punk and hardcore!

As much as I love my milk crate of rare vinyls, your rock and roll, take-no-prisoners attitude has encouraged me to put down the headphones and pick up a microphone. I am proud to announce that I am starting my very own punk rock band!

We call ourselves “Diesel Train In Vain.” With me on vocals and Adam Pepsi on keyboard, we’ll be shocking the masses with our glam Train Table Simulator 2014 lifestyle straight out of the burgeoning Essex County Punk Scene. This is our aesthetic:

I have been busy writing lyrics, and I discovered that I have the heart not only of an expert train scheduler and GameFAQs message board participant but of a poet. Here’s some lines from our cover of the New York Dolls’ legendary song “Subway Train”:

Ever since I been ridin’

Right on the diesel train

You can hear the whistle blowin’

And now your friends

Ya know ya had us scheduling efficiently

Just tryin’ get your fare

‘Cause we was all ridin’

Right on the diesel train

And you can hear the conductor shoutin’

That they are better than steam trains

Digster, how would you and Jello Biafra like to join Diesel Train In Vain and make it a trio? We could use a drummer, electric guitarist, bassist, or, heck, even another vocalist. Picture it: you and me drenched in sweat, sharing a microphone on stage at a dirty punk warehouse while hundreds of fly honeys scream and throw their brassiers at us. What do you say, Dig? We can start rehearsing this weekend in my basement!

Thank you so much for giving me an intense migraine with another one of your asinine letters.

Before I even get to your outrageously inappropriate suggestion, I must remark that I have no idea what “The Germs” or “S.F. hardcore” is. I assume you these are fictional bands from your little train video game. I listen to real punk music, like the Capitol Steps and the Singing Senators. Maybe look them up sometime, Fail Marcus.

I am a father, David. A father and a pundit. I can’t drop everything in my life to pursue some ridiculous rock and roll fantasy with you and “Adam Pepsi.” Furthermore, I do not share your pathetic dream of us in some rickety warehouse, probably in a dangerous and unacceptable neighborhood like Bushwick or Williamsburg, crooning about trains and elevators. As you acknowledged in your letter, I am already a punk rock star and sexual symbol, because that’s what being a Polk Award-nominated pundit means. Do you even understand what you wrote? No, of course not. Why would you care about such things as reading comprehension, David?

I will not be joining your band. Neither will Jello Biafra. And you will never contact me about punk rock music ever again.

Carl “The Dig” Diggler has covered national politics for 30 years and is the host of the Digcast, a weekly podcast on iTunes and Soundcloud. Got a question for the Dig? E-mail himat [email protected] or Tweet to @carl_diggler.