A weekly Note from Elie is part of the CAFE Brief, and Insider members can listen to a recording of the note the same day. Please enjoy Elie reading this week’s note, “A DOJ Bailout For Michael Flynn,” and read his note in your inbox every Friday.

Michael Flynn has not been exonerated.  He has not been “totally” exonerated or “essentially exonerated” or any other flavor of exonerated, as President Donald Trump has claimed with varying degrees of ginned-up indignation.  What he has been is bailed out by Trump’s spineless political sycophant, Attorney General William Barr, who yesterday took the unprecedented step of moving to drop the case against Flynn, despite Flynn’s straightforward crime and admission of guilt.  This is an injustice, pure and simple.

Here are the facts.  Michael Flynn lied to the FBI.  He talked to the Russian ambassador during a crucial presidential transition period about eventually easing Obama-era sanctions, and then lied to the FBI about those talks (and other topics).  Flynn pled guilty to a felony in federal court.  He admitted under oath that he knew it was a crime to lie to the FBI, that he was not entrapped, and that he was “in fact guilty of the crime charged.”  He stipulated that he had committed additional crimes relating to his work for Turkish interests in the United States.  A federal judge accepted Flynn’s guilty plea.  Trump then fired Flynn and tweeted,“I had to fire General Flynn because he lied to the Vice President and the FBI. He has pled guilty to those lies.”  As Kevin Bacon’s prosecutor character puts it in A Few Good Men: “These are the facts of the case.  And they are undisputed.”

So let’s just drop this “exonerated” garbage.  Flynn would’ve been “exonerated” if it turned out he had not lied to the FBI about his talks with Russia.  But newly-released FBI notes show no such thing.  Even Flynn’s most ardent defenders claim not that he told the FBI the truth, but rather that he was somehow “framed” or “set up.”

This argument goes nowhere.  The FBI notes on which Barr based his move are “stunning,” — as Flynn’s supporters claim — only to those who are far too easily stunned, or just faking it.  The notes show the FBI preparing for the eventualities that any competent law enforcement agent can, and must, consider.  If Flynn lies, do we confront him with other evidence?  Do we advise him specifically that lying to federal agents is a crime?  (There is no legal requirement to do so, and Flynn later admitted he knew it was a crime to lie to the FBI, as any seasoned official would).

In my fourteen years as a federal and state prosecutor, I’ve questioned hundreds of people.  Sometimes I spoke directly with subjects, other times I prepared FBI agents to do interviews out in the field.  Whenever you question a subject, there are three potential outcomes: the subject (1) tells the truth, (2) lies, or (3) decides not to talk.  Flynn chose door number two.

Naturally, you strategize about these contingencies in advance.  If he admits it, what do we do?  Arrest him on the spot, or try to bring him in and flip him?  If he lies, do we confront him?  Do we show him the evidence proving he lied?  Do we give him a second chance to come clean?  Do we arrest him immediately for false statements?  Or do we let it sit and try to leverage him with the possibility of a criminal charge?  If he doesn’t want to talk, do we walk away?  Advise him to get him a lawyer?  Serve him a subpoena?

These conversations are not only common — they’re essential.  If you’re not having these kinds of discussions as a prosecutor or agent, you’re not doing your job.  You don’t just wing these things and hope for the best.  You strategize, you game it out, and you prepare for the contingencies.

One passage in the FBI notes has gained particular attention.  An agent writes: “What is our goal? Truth/admission or to get him to lie, so we can prosecute him or get him fired?”  Putting aside new White House Press Secretary Kayleigh McEnany’s dishonest manipulation of the quote — she cut off the first half, added the words “We need to” (get him to lie) and turned it from a question to a declarative — we don’t know exactly what that note means.  Was the agent recording his own internal thoughts, or something that somebody else said?  And we don’t know the answer to the question posed: was the FBI’s goal to find the truth or to see if Flynn lied?

Let’s assume the worst, for the sake of argument.  The law does prohibit questioning a subject if the sole purpose is to catch that person in a lie.  But that’s not what happened here.  The FBI had ample reason to question Flynn, given intelligence — which turned out to be accurate — about his contacts with Russians on sensitive issues during key periods of the transition.  The FBI would have been derelict not to question Flynn.  And by lying to the FBI, Flynn himself confirmed he did in fact have something to hide.

In any event, the law gives prosecutors and cops broad latitude in questioning subjects.  Law enforcement agents can even use “pretexts” — lie, intentionally and strategically — to get information from a subject.  Of course, the FBI agents in Flynn’s case didn’t do anything like this.  They asked him, straight-up, about his talks with Russia.  He chose to lie, plain and simple.

If there’s a foul-play dimension to this, it’s firmly on Flynn’s side.  Flynn pled guilty in December 2017 under a cooperation agreement requiring him to tell Mueller’s team everything he knew — about his own crimes, and crimes committed by others.  Scary stuff for anyone who ever did shady business with Flynn.  And, for at least a year, Flynn did just that.  Mueller’s team told a court that Flynn had provided not just the standard “substantial assistance” but “particularly valuable” information relating to “several ongoing investigations.”  That’s not what a prosecutor writes about a routine cooperator.  That’s what a prosecutor writes about a cooperator who’s about to blow the doors off.

But then — Flynn flaked.  His cooperation fell apart.  We don’t know exactly why, but in my experience, cooperation gets derailed for two reasons.  Either the cooperator lies, or he gets cold feet and decides he doesn’t want to do it anymore.

So why might Flynn have bailed on his cooperation?  Remember that in the obstruction of justice section of his report, Mueller found that Trump publicly dangled a pardon for Flynn and others.  And Trump’s attorney called Flynn’s attorney with some thinly-veiled carrot-and-stick language, noting that Trump still had warm feelings towards Flynn but that Flynn’s cooperation would be taken as an act of “hostility” (if you catch my drift).

Whatever the cause, we now know the result.  Flynn stopped cooperating, leaving Mueller’s team unable to prosecute others based on his information.  The downside to Flynn of going south as a cooperator is plain: he faced significantly more time behind bars than he did under his plea agreement.  Unless… unless there was only some way somebody could prevent a defendant from having to go to prison at all.

When Barr moved yesterday to dismiss Flynn’s charge and conviction, he sold out his line prosecutors, as he has done before; like the Roger Stone prosecutors, one of the Flynn prosecutors resigned from the case, clearly in protest.  And Barr conspicuously bent over backwards to muster some basis to save a close political ally of Trump.  Show me one other case out of tens of thousands handled during his tenure where this Attorney General has agreed to un-do a guilty plea.  Barr has done Trump’s dirty work here, preventing Trump from taking on blowback from a potentially self-destructive pardon of a well-connected convicted felon.

The injustice here is deep and layered.  Flynn will escape scot-free despite committing multiple serious crimes, despite admitting to one of them, and despite compounding the damage by piling new lies upon the old ones.  And sympathizers will hold up Flynn as a martyr to some vague “Witch Hunt!” cause.

Despite Barr’s politically-driven rescue, Flynn has earned his own eventual epitaph: He sold out his country when he chose to lie to the FBI about a matter of national security.  Nothing — not the FBI notes, not a rescue by Barr, not a presidential pardon — can change that fundamental truth. 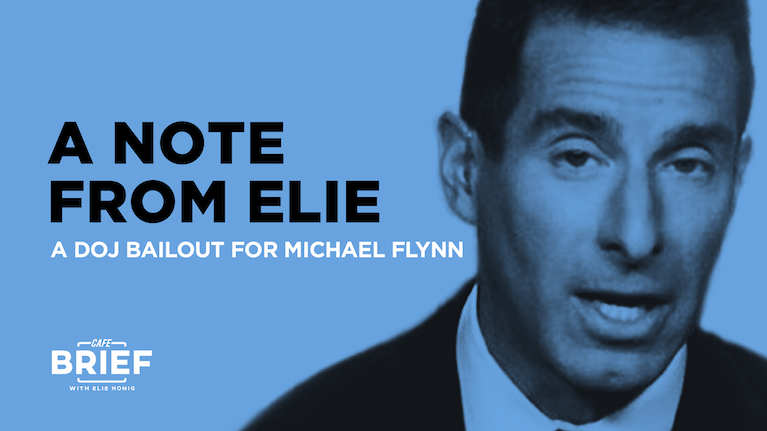 Note From Elie: A DOJ Bailout For Michael Flynn