When Republican Senator Susan Collins of Maine announced last week that she would vote to confirm then-Judge (now-Justice) Ketanji Brown Jackson to the U.S. Supreme Court, it was a front-page, push-notification, Twitter-trending moment.

The very fact that Collins’s support for Jackson was such big news is, in itself, big news – the kind that reveals much about the current status of our politics.

Ultimately, three Republican Senators (Collins plus her colleagues Lisa Murkowski and Mitt Romney) – were able to bring themselves to support an eminently qualified, non-extremist candidate nominated by the other political party. Three. And it was surprising that Justice Jackson got even that much Republican support.

It has been fascinating over the past month or so to watch some Republican Senators flail about for any justification to vote against Jackson’s confirmation. Tellingly, nobody argued in any serious manner that Jackson was unqualified on the merits. How could they, when – as noted by Supreme Court expert Steve Vladeck – she has more judicial experience than 43 of the last 58 justices, and more than Chief Justice John Roberts and Justices Clarence Thomas, Elana Kagan, and Amy Coney Barrett had, combined, at their confirmations?

Instead, the attacks degenerated into an opaque, virulent gruel of “I don’t like what she stands for” and “I don’t approve of people who like her,” mixed with a dash of nonsensical hysterics about her purported sympathy for certain types of criminals. Senator Lindsey Graham, who voted in favor of Jackson’s confirmation to a federal court of appeals just last year, worked himself into a transparently disingenuous lather about “her record of judicial activism” and flipped over to a “no” vote. Even Graham hardly seemed to buy his own nonsense, scraping together a mishmash of halfhearted objections. Senator Roy Blunt praised Jackson’s nomination as “a high point for the country to see her go to the court.” In the next breath, Blunt explained that he’d be voting “no” because “I don’t think she’s the kind of judge that will really do the kind of work that I think needs to be done by the court” – whatever the hell that means.

It hasn’t always been this way. The general principle used to be that if a president of the other party nominated a candidate who was (1) qualified, and (2) not unbearably extreme, then you voted “yes.” Elections have consequences and all that, and if you don’t hold the White House, then you don’t get the person of your choosing and you accept a reasonable alternative.

It’s remarkable to look back now at past Supreme Court confirmation votes. Justice Antonin Scalia, the hero of the modern right and an archvillain to the left, was confirmed 98 to 0 in 1986. That’s right; not a single Democratic Senator voted against him. In 1993, Justice Ruth Bader Ginsburg, paragon of liberalism, sailed through by a 96-3 vote. Also in the 1980s and 90s, Sandra Day O’Connor was confirmed by a 99-0 vote, William Rehnquist by 65-33, Anthony Kennedy by 97-0, David Souter by 90-9, and Stephen Breyer by 87-9. (Clarence Thomas eked through at 52-48 but only after serious allegations of sexual harrassment.)

The general practice of supporting the other party’s nominee held, mostly, through the first decade of the 2000s. John Roberts won confirmation 78-22, Samuel Alito got through 58-42, Sonia Sotomayor was approved by 68-31, and Elana Kagan prevailed 63-37, all with substantial support from the other political party (though the Democrats started to pull back on Alito, with only four Senators voting across party lines to confirm, even though he was plainly qualified).

All hell broke loose, of course, with the Merrick Garland nomination in 2016. You know the story: Scalia died unexpectedly, President Obama nominated Garland, and Senate Majority Leader Mitch McConnell refused even to hold a hearing, invoking an unwritten rule against choosing a justice during an election year. Democrats seethed, Trump won the White House, and the open seat became his to fill.

From there on out, we’ve seen nearly straight party-line votes. Trump’s first pick, Neil Gorsuch, was confirmed as Scalia’s replacement in 2017, 54-45, with only three Democratic votes. The next year, Brett Kavanaugh squeaked through, 50-48, with one Democratic vote (after contentious hearings over sexual assault allegations). And, just days before the 2020 election, Amy Coney Barrett won confirmation to fill Ginsburg’s seat by a 52-48 vote, with zero Democratic support.

Allow me a quick detour to solve this ongoing dilemma about who gets to choose a new justice during an election year, and when. How about this: whoever is president gets to choose, just like the Constitution says. The standard line trotted out by both parties when the other party holds the White House and a vacancy comes up during an election year – “Let the people decide!” – is nonsense. They already decided. When the people voted for Barack Obama in 2012, they decided that he would choose Supreme Court nominees for the next four years. Same thing when the people voted for Donald Trump in 2016. It shouldn’t matter if we’re close to an election; the president serves until noon on January 20, and he should get to choose a nominee right up to that point. (Added bonus: it’s the only workable, bright-line rule not susceptible to constant manipulation.)

Now that Senators reflexively oppose qualified nominees of the other party, we should ask: how far does this trend go? Will we ever again see a situation where a president of one party nominates a candidate who is then confirmed by a Senate controlled by the other party? And how long will the Senate be willing to hold up or reject the nominee of the other party? We saw McConnell pull off the trick for about eight months after Scalia died in early 2016 and then Obama nominated Garland that March. What happens if, for example, Republicans take the Senate in the upcoming midterms and then a Supreme Court vacancy opens up in, say, mid-2023? Will the Senate deny President Biden a selection for a year-and-a-half? What if Biden wins re-election, Republicans keep the Senate, and then a vacancy occurs in early 2025? Will it remain unfilled for the next three-and-a-half years? These seem like absurd outcomes, but they also seem more likely than cross-party consensus.

Justice Jackson has now joined her three most junior colleagues in scraping through Congress with only minimal support from the party opposite of the president who nominated her, despite her obvious qualifications and her brilliant, unflappable performance at her confirmation hearings. This seems to be the new norm, and it’s a shame – not just in the kumbaya sense that we’d like to see our parties find common ground, but also with respect to the legitimacy of the Court. We might have argued, back when even ideological pillars of the right and left like Scalia and Ginsburg got in by nearly unanimous votes, that the Supreme Court stood above politics. But now that votes predictably fall nearly entirely along political party lines, it’s impossible to make that claim with a straight face.

It’s a bad look for the Senate, of course – but we’re well used to that. The bigger problem is that this phenomenon strikes a blow to the notion of the nonpolitical Supreme Court. Justice Jackson’s confirmation is a moment for history, and for long overdue celebration. You’d think both parties would want to share in that. But we’ve seen once again that politics – the petty, partisan kind – reign supreme. 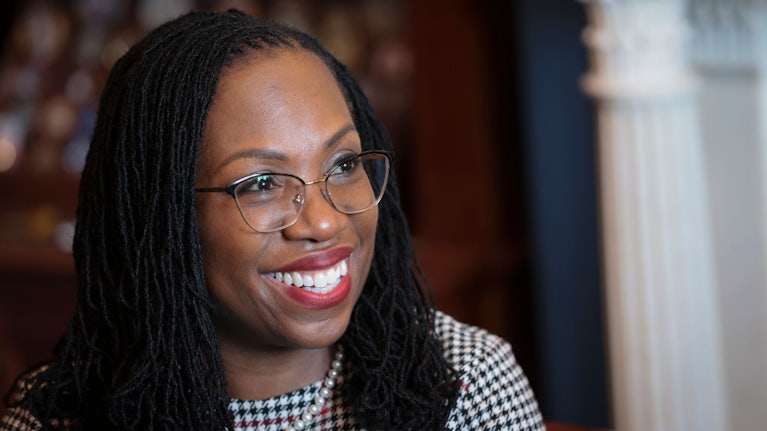