To recuse or not to recuse?  That is the question, or was the question, asked many times of Judge (soon to be Justice) Amy Coney Barrett at her confirmation hearing this week in the Senate Judiciary Committee.  If a case related to the 2020 election should reach the Court, would Barrett recuse herself based on a conflict of interest, or at least the appearance of one?  Barrett dodged, repeatedly and predictably, when asked by Senate Democrats this week.

Let me end any lingering suspense: she won’t.

Given President Trump’s ongoing campaign to sow doubt about the 2020 election and to promote baseless theories about massive mail-in ballot fraud, a dispute over the election could wind up in the Supreme Court.  Voting rights super lawyer Marc Elias explained on a recent episode of Stay Tuned with Preet why, in his view, it is unlikely — and far less likely than many believe — that this scenario unfolds.

Count me skeptical.  Barring an absolutely overwhelming Biden landslide — I’m talking 400-to-138 type electoral college numbers — I expect Trump to fight like a rabid raccoon trapped in a garbage can to throw the election over to the courts (or the House, or an arm-wrestling match, or anywhere but the voters).  If you expect Trump to go quietly and graciously in any remotely contestable situation, then I don’t know where you’ve been the past three years and nine months.  Plus, it’s 2020.  This year already has been an episode of Veep crossed with The Twilight Zone.  Why not a contested election, just as a capper?

To be clear: Trump created this recusal headache for Barrett.  It’s his fault, not hers.  The day before Barrett’s nomination, Trump declared that, “[W]e need nine justices. You need that. With the unsolicited millions of ballots that they’re sending, it’s a scam; it’s a hoax…  So doing it before the election would be a very good thing.”  At a minimum, Trump’s thinking-out-loud commentary creates the appearance of a conflict of interest: it looks like Trump expects his nominee to help him out on any election-related case, and a pro-Trump decision would be payback for the nomination itself.  Whether or not Barrett would actually be swayed by Trump’s apparent expectation — and I doubt she would — Trump’s comments put her in a tough spot and undermine public faith in the Court’s independence.

Barrett faces two questions — one asked repeatedly by the Judiciary Committee, and one overlooked.  The former, oft-asked question was the obvious one: Will Barrett recuse herself from any election-related case?  Barett, predictably, demurred, saying essentially that it would depend on all the circumstances.

If and when Barrett has to make such a recusal decision, she will be guided by nothing but her own instincts and discretion.  While federal judges are generally bound by a code of conduct setting forth ethical standards for recusal, that code does not apply to Supreme Court justices.  Why on earth, you may ask, do the ethics rules apply to all federal judges except those on the Supreme Court?  The technical explanation seems to be that Congress created the Judicial Conference (which issues the rules) to regulate the lower federal courts, but Congress cannot impose restrictions on the Supreme Court itself.  Or, to put it more bluntly: the rules don’t apply to the big shots.  Still, the Supreme Court itself could easily adopt the rules, at least in some non-binding, advisory capacity.  But it hasn’t.

So it will be entirely up to Barrett whether to recuse.  Members of Congress can “call for” Barrett’s recusal all day long, but they cannot legislate or otherwise compel it.  Nor would any private litigant have a legal basis to seek the recusal of a Supreme Court Justice.

In fact, Supreme Court justices rarely recuse from cases in which they do not have a direct personal interest or connection.  And the mere fact that Trump nominated Barrett does not require her recusal.  Of the four Supreme Court Justices nominated by President Richard Nixon, three — Warren Burger, Harry Blackmun, and Lewis Powell — ruled on the 1974 US v. Nixon case (the “Nixon tapes” case).  The fourth, William Rehnquist, did recuse, but only because he had directly worked in the Nixon administration.  (All three Nixon-appointed Justices on the case ruled against him, and Nixon resigned weeks later).  Similarly, both Justices nominated by President Bill Clinton — the late Ruth Bader Ginsburg and Stephen Breyer — stayed on the Clinton v. Paula Jones case, and they too ruled against the President.

Now to the question that Judiciary Committee members should have asked, but didn’t.  An election-related dispute that reaches the Supreme Court likely will involve the rights and obligations of a state to carry out election procedures — a recount, for instance, as in the 2000 Bush v. Gore case.  The Committee should have probed Barrett’s views on this: should states be free to carry out their own election-related functions, or is it the role of the U.S. Supreme Court to intervene and dictate what the states can and cannot do?  We can’t know in advance which political party might prefer which outcome.  That will depend on who’s ahead and who’s behind in a contested vote count.  This question could have pushed Barrett to commit to one legal principle or the other, without first seeing which political party would benefit from either outcome.

Barrett isn’t going anywhere.  She telegraphed that by hedging when asked; and there is no code, law, or precedent requiring her to recuse.  If there is a Supreme Court case on the 2020 election — heaven help us all, if there is — she will be on it.

And if Barrett does rule in Trump’s favor, it won’t matter how well-grounded and persuasive her legal reasoning is.  The public simply will not accept any such decision as legitimate, because of Trump’s craven solicitation of a favorable vote as an apparent condition, or at least expectation, for her nomination.

Throughout his tenure, Trump has displayed disregard — disdain, even — for the notion of the politically independent judiciary.  Like virtually everything else in government, Trump sees the Supreme Court as a result-driven body tasked solely with protecting his flank.  Barrett could have taken a small but powerful stand against that by committing to recuse herself from any election-related case.  But she declined.

The courts are supposed to stand above and beyond politics.  But because of Trump’s actions, and Barrett’s inaction, the public will increasingly view Supreme Court justices as political actors, dressed up in fancy robes. 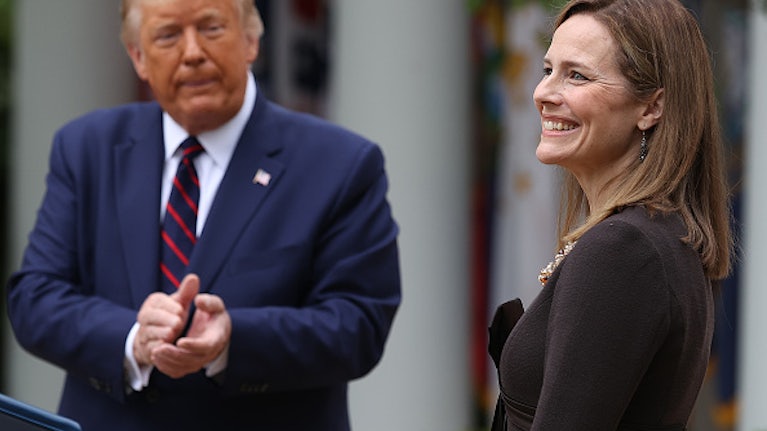 Note From Elie: A Recusal? Don’t Count On It