Judge Amy Coney Barrett’s Supreme Court confirmation hearing begins, and likely will conclude, next week in the Senate Judiciary Committee.  While the recent positive Covid-19 tests of three Republican Senators, including two on the Judiciary Committee (Mike Lee and Thom Tillis), complicate matters a bit, it’s still all but a done deal.

Judiciary Committee Republicans hold a 12-10 majority, so they could struggle to reach a quorum or hold a majority without Lee and Thillis.  But one or both could return in time to vote on Barrett’s nomination.  Even if they can’t physically attend, the Senate has conducted dozens of hearings remotely and permits voting by proxy in the Committees.  Beyond that, Senate Majority Leader Mitch McConnell has any number of, well, McConnell-like tactics at his disposal.  He could delay the Committee vote to await the return of Lee and Thillis, he could reassign other Republican Senators to the Judiciary Committee, or he could bypass the Committee altogether; there’s no Constitutional requirement that a nominee be passed out of the Committee before confirmation by the full Senate.

The Covid positives also could pose a challenge for Republicans in the full Senate, where they hold a 53-47 edge, but with two members (Senators Lisa Murkowski and the perpetually “concerned” Susan Collins) already on record against voting on a nominee before the election.  Republicans will still have the necessary votes if two of Lee, Thillis, or Senator Ron Johnson return from their Covid diagnoses in time to vote.  To get a sense of the depth of Republican commitment to confirming Barrett, Johnson declared that he would show up on the Senate floor in a “moon suit,” if necessary.  If you think Mitch McConnell and his compatriots will stop at anything to get this done, then you don’t know Mitch McConnell.  This isn’t about consistency, or principle, or health; it’s about straight math.  The Republicans have the votes, and the power, and they’ll exercise it to the hilt.

Speaking of math: Barrett’s confirmation will turn a 5-4 conservative majority on the Supreme Court to a comfortable 6-3 margin.  Last term featured a Court with five traditionally conservative justices, all nominated by Republican presidents (Chief Justice John Roberts and Justices Clarence Thomas, Samuel Alito, Neil Gorsuch, and Brett Kavanaugh) and four established liberal justices, all appointed by Democratic presidents (the late Justice Ruth Bader Ginsburg and Justices Stephen Breyer, Sonia Sotomayor, and Elena Kagan).  Roberts emerged last term as an unpredictable swing vote, joining with the liberal justices on key rulings on LGBTQ rights, immigration, the census, and Trump’s financial records.  But Roberts still has long conservative roots.  And when the tally becomes 6-3, even if Roberts crosses over, the liberal position still will not prevail unless one more conservative jumps ship.

Looking ahead, the demographics aren’t promising for the liberal bloc.  The oldest justice on the Court is Breyer, currently 82 years old, one of the three remaining liberals.  The three youngest justices will be Gorsuch, Kavanaugh, and Barrett, all between 48 and 55 years old.  That conservative triumvirate could still be on the Court together in the year 2050.

Given the grim outlook, some Democrats have raised the possibility of expanding the size of the Court and nominating enough justices to level out the scales.  If you’re hoping for that outcome, here’s the good news: it is possible.  The Constitution actually does not specify a number of seats on the Court.  It’s up to Congress to set that number through legislation; in our history, we’ve had as few as five and as many as ten seats on the Court.  The current law, setting the number at nine, was passed over 150 years ago, in 1869.  While we’ve grown accustomed to nine justices, it does not have to be that way, and the number can be changed.

But here’s the bad news to anyone hoping to super-size the Supreme Court: it’s just not going to happen.

First, calls to pack the Court presuppose a sweeping Democratic electoral victory in 2020.  Realistically, given the need for new legislation to expand the Supreme Court bench, Democrats will have to retain control of the House, win over the Senate majority, and take the White House.  Democrats do appear to have a realistic chance to run the table this November, and they’ll need to do just that as a prerequisite to Court expansion.

But even if Democrats pull off the electoral sweep, there’s a serious question whether enough Democrats are on board.  Most importantly, Joe Biden appears to oppose court expansion.  He said so just last year, several times.  In July 2019, Biden told the Iowa Starting Line, “No, I’m not prepared to go on and try to pack the court, because we’ll rue the day.”  In October 2019, during a Demcoratic primary debate, Biden declared, “I would not get into court packing.  We add three justices.  Next time around, we lose control, they add three justices.  We begin to lose any credibility the court has at all.”

Biden made those statements before Ginsburg passed, and perhaps Biden will do a Lindsey Graham and completely reverse his own prior unequivocal declaration of principle.  But in the first Presidential debate, when asked directly whether he would seek to add justices to the Court, Biden dodged: “Whatever position I take on that, that’ll become the issue.”  Asked again, this time by Trump, Biden explicitly took a pass: “I’m not going to answer the question…”  A dodge leaves more wiggle room than his prior responses, but Biden easily could have come out in favor of Court expansion if that’s where his head is now.

Even if Biden turns around, it’s still not a done deal.  If Democrats take the majority in both the Senate and the House, it’s not a given that they’ll be able to keep everyone on board with Court expansion.  As Biden’s own opposition demonstrates, the concept is a stretch for centrists wary of being seen as tinkering with long-established parameters and opening the door to an escalating structural battle.  It won’t be easy to keep a newly-elected centrist Democratic House member from a swing district on board with Court packing.

There’s no easy answer for Democrats.  But they need to focus on what’s realistically in play.  They can use the confirmation hearings to pin Barrett down on her judicial philosophy and expose to the public her stances on key issues including abortion rights, equal protection for LGBTQ people, and the Affordable Care Act.  They can’t stop Barrett from being confirmed, but they can underscore the stakes and turn her positions into political motivation for voters.

Democrats and liberal interest groups also can design legal and legislative strategies to protect their highest-priority policies — to keep them out of the Supreme Court and to provide fallback positions in the states.  And they can identify areas where they might be able to flip Roberts plus other traditional conservatives, as they did successfully on the LGBTQ case (where Gorsuch joined Roberts and the liberal bloc) and the Trump tax returns case (where Gorsuch and Kavanaugh both crossed over).

There are realistic steps Democrats can take to preserve their most valued legal principles, even with a Supreme Court minority.  No doubt, Court expansion is an intriguing concept, particularly given the dire scenario facing liberals on the Supreme Court.  But it doesn’t do any good to focus attention and political capital on something that could happen, but simply won’t. 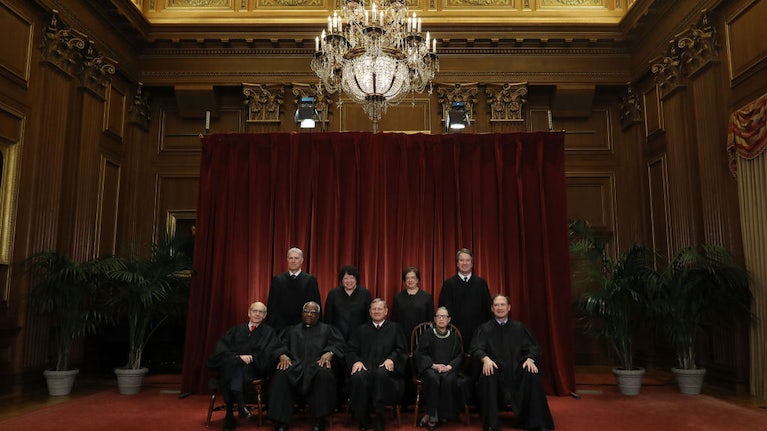 Note From Elie: A Super-Sized Court? Intriguing, but Improbable