Sometimes, in all the chaos, a little sorting can be helpful.

As the January 6 Committee builds its witness list (or, perhaps, its wish list), every new subpoena will prompt the “will he or won’t he?” conversation. Will the lucky recipient testify, will he negotiate, or will he flip the bird and turn it into a spectacle?

To assist you in making this assessment, I’ve developed a highly-scientific set of categorical classifications. Every witness in and around Trumpworld lands in one (and only one) of four possible groups. Figure out which category fits best and you’ll be most of the way towards predicting what the witness will do. I’ve appointed honorary team captains; uniforms and mascots are still being workshopped. Without further ado…

These are the women and men who testified, and told the truth, when they easily could have avoided doing either or both. For example, as various liars and scoundrels scurried for dark places during Trump’s first impeachment, a slate of courageous public servants stepped forward, in defiance of Trump’s efforts to silence executive branch officials, at their own peril: Yovanovitch, Fiona Hill, Bill Taylor, Alexander Vindman. (I’m not including Gordon Sondland here; he testified but he was a half-truth-telling mess.)

I’m also going to include the police officers who defended against the Capitol insurrection: Michael Fanone, Daniel Hodges, Harry Dunn, Aquilino Gonnell, and the many others who they represent. They served, they fought a mob, they spoke truth, and they called out the powerful. Hodges memorably told the January 6 Committee, “I need you guys to address if anyone in power had a role in this, if anyone in power coordinated or aided and abetted or tried to downplay, tried to prevent the investigation of this terrorist attack. Because we can’t do it.” Amen. With more witnesses like these, the Committee (and prosecutors) just might get to truth and accountability. Alas, the Patriots are an exceedingly rare breed.

These are the Trump formers-turned-tormentors. Cohen, the onetime Trump attack dog, has now become his most outrageously profane detractor. I won’t quote Cohen’s colorful descriptions of Trump in this somewhat family-friendly format; suffice it to say that I once did Cohen’s podcast and his language got so heated that I had to demand that the producers stop recording and edit out certain vulgarities. Cohen now will talk to anybody who will listen about Trump’s misdeeds: media, Congress, prosecutors. Yet nobody seems to trust him quite enough to bank a charge on his word.

Anthony Scaramucci is the runner-up here. He didn’t last nearly as long as Cohen did around Trump, and his language, while impressively foul, can’t match up with Cohen’s uncut, profane vitriol. And don’t forget Lev Parnas, Rudy Giuliani’s sidekick in “Fraud Guarantee” and other shady dealings, who went from Trump enthusiast yearning for another awkward thumbs-up photograph with the boss to eager but unwanted cooperator. Parnas is on trial in the SDNY right now; I would say “maybe he’ll flip,” but he’s already tried and nobody seems interested.

We’ll carve out a sub-group here for those (sorta) conscientious objectors who (purportedly) stewed silently while working for Trump but then later, after leaving (or getting tossed), found a conscience of sorts (and, invariably, wrote a book): Stephanie Grisham, Miles Taylor (“Anonymous”), Omarosa Manigault-Newman. The godfather of this group is Cliff Sims. The man worked for Trump, then wrote a damning tell-all, and then returned to work for Trump again. Bravo, sir.

This is the smallest group but also the most potent. Its membership includes the two most devastating smoking-gun not-quite-witnesses of the Trump era: Bolton (Trump openly bragged to him about trying to shake down Ukraine in exchange for political investigations of the Bidens) and Don McGahn (Trump ordered him to fire Mueller, and then to lie about it and create a false document to cover it up).

Either could have come forward and testified to devastating effect — Bolton in the first impeachment and McGahn in the Mueller obstruction of justice investigation. Both, instead, hid behind meek claims that they wouldn’t quite defy either Trump or investigators, but rather would patiently await word from the courts. Knowing full well that delay would kill the deal, McGahn managed to get the case into courts, where it dragged out for nearly two years. When he finally testified in June 2021, nobody cared. Bolton’s sloth act was so untenable that impeachment investigators knew they couldn’t afford the waste of time and didn’t even bother. But hey, at least Bolton cashed in with his book after the impeachment trial ended.

Forget about refusing to testify; the more dedicated members of this group almost relish the notion of being held in contempt or prosecuted. Take Stone, our captain. Did anybody have more fun outside the courthouse than Stone, as he mugged for cameras and hit the Nixon pose? Did anybody ever fear going to prison less than Stone, secure in the knowledge that Trump would save him? (Indeed, Trump commuted Stone’s sentence and later pardoned him.)

This team is overloaded with malignant talent. Beyond Stone, we’ve got his fellow alums (and pardon-ees) from the Mueller investigation: Michael Flynn, Paul Manafort, George Papadopoulos. There’s a Congressional caucus here: Matt Gaetz, Kevin McCarthy, Mo Brooks, Jim Jordan, Paul Gosar. And then there’s Rudy Giuliani. He’s firmly in this category for now. But given a possible SDNY indictment, and Rudy’s general, shall we say, unpredictability — he could jump onto Team Jilted if things fall a certain way.

So, now that we’ve established our squads: where do our newest crop of subpoena recipients and other likely witnesses fall? Steve Bannon, plainly, is a Zealot, and might even challenge Stone for the captaincy. He already was charged with fraud in 2020 and barely broke a sweat before Trump pardoned him. And now he’s out there doing his characteristic “guy who sounds like a mad genius but is really just mad” shtick. If Bannon does get indicted for contempt of Congress — and he should, but it’s complicated, as I wrote here — he’ll surely relish his martyr status, and fundraise off it.

Dan Scavino, Trump’s designated tweeter, courageously dodged service of a subpoena by Congress, which had to track him down just to get the process started; he has earned his spot in this group. Kash Patel and Mark Meadows seem likely to end up here too, though they are both reportedly “engaging” with the Committee. Either might land on Team Coward (if they slip by with testimonial half-measures) or Jilted (if things go really bad).

I’ll reluctantly put Jeffrey Rosen on Team Patriot. Yes, he served an undistinguished tenure as an ineffectual, enabling deputy attorney general to Bill Barr. But when the chips were down and Trump tried to weaponize DOJ in his coup attempt, Rosen stood strong. He refused to send a fraudulent letter claiming election fraud, he laughed off requests by Meadows and others that DOJ look into lunatic theories about Italian satellites zapping voting machines, and he ultimately threatened to spark a string of resignations if Trump went all the way with his mad designs on a coup. And now Rosen has testified to the Committee, spending what must’ve been a remarkable eight-hour day in the witness chair.

Another former DOJ official, Jeffrey Clark, has now been subpoenaed too. He is, of course, an easy call: the man tried to run a coup inside DOJ to help Trump steal an election. He’s a villain, and he can hang out with the dregs on Team Zealot.

This little exercise in categorization reminds us that, while our legal and political systems have mechanisms to encourage compliance, much of the final outcome on any subpoena — and any investigation, writ large — depends, quite simply, on the quality and principles of the people. Who will act in good faith, and who will play dirty to win? Who prioritizes truth, and who is willing to bend or hide it? Who is loyal to rule of law, and who prostrates himself before one powerful individual? Those factors ultimately will determine whether the January 6 Committee ever succeeds in discovering the full truth. 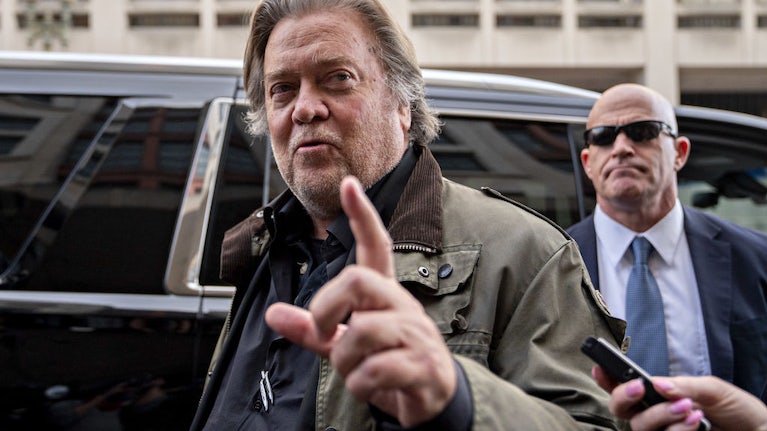 Note From Elie: A Taxonomy of Trumpworld Witnesses