I voted last week, and it felt different.

I live in New Jersey — I know, it’s obvious — and we held one of the two big off-year gubernatorial elections, along with Virginia. Our incumbent Democratic governor, Phil Murphy, barely held off a longshot challenge from Republican Jack Ciatarelli, who ended up far closer to pulling off a monumental upset than anyone expected. The final margin looks likely to be just a percentage point or two. It was a good reminder that, whichever party or candidate you might support — pardon the cliche, but sometimes they’re true — every vote matters.

Voting felt different this year, first, in a purely mechanical sense. Last November, our local polling places were mostly closed because of Covid-19. So it was either vote by mail or go in person on Election Day to a central site to cast a provisional ballot. I was struck by how much has changed since then. No, the pandemic isn’t over yet, but last year at this time, we were still in the worst of it. We didn’t even have vaccines yet, and the hope that came with them. A year later, I feel gratitude for our collective drive and scientific ingenuity. In some respects, progress has been slower than we all hoped, but we’ve also come a long way in a short time.

This year, I went back to my usual polling place, a middle school a few blocks from my house. When I walked in, I immediately caught that distinct scent that the high-end perfumiers call “Eau du New Jersey Public Schools.” I can’t say exactly what it is — maybe it’s the industrial paint, or the solution they use to clean the floors, or something emanating from the cafeteria  — but our schools today smell exactly the same as they did in the 80s and 90s. I felt like I was back in fourth grade, mostly in a reassuring, comforting way.

For the first time in many years, New Jersey has substantially upgraded its election technology. You used to go in, give your name to a volunteer poll worker, physically sign your name in the big ledger book, go into a creaky voting booth, press some buttons, and then hit “submit.” (Then, there was that awkward moment of nothing happening: Did it go through? Should I hit the button again? Should there be a noise or something? Did that count?) Now, it’s both more automated and more tangible. There’s a user-friendly touch screen, and you can actually see and hold a paper record to match your vote. At the end, the machine accepts your ballot with a satisfying thunk — I’m big on aural closure — and an explicit note on the screen confirms that your vote has been cast. It feels good, and it inspires confidence.

But of course voting also felt different this year, beyond the upgraded mechanics. For the first time, I was consciously aware of just how blessedly easy it was for me to vote here in my New Jersey suburb — in ways that don’t apply to broad swaths of the country. No issues with my name being purged from a roll, nobody rejecting my ballot because my signature wasn’t identical to some past specimen, no difficulty getting to and from the polling place, no law enforcement presence, no wait (no line at all, in fact). It was the most privileged form of voting.

Of course, millions of people across the country have to overcome obstacles to cast their votes. We’re now in the midst of an ongoing struggle between states that have passed restrictive new voting laws and the Democratic-controlled U.S. Congress, which has done, well, nothing other than rend their garments and talk big. Despite the apocalyptic rhetoric — “21st Century Jim Crow” and the “most significant threat to our democracy since the Civil War,” to quote President Joe Biden — Democrats somehow still lack the collective political will to actually do anything.

And of course, I thought of former President Donald Trump and his acolytes, and their continuing claims of election fraud in 2020. (Yes, it’s now been a full year, plus a few months, that Trump has been harping on this delusional fantasy.) Of course Trump’s election fraud claims are outright lies. And those lies have spurred more lies, anger, and violence — culminating in the January 6 insurrection. We also know this didn’t end on January 6. The election fraud lie persists, and it likely will result in more discord and violence unless and until it is extinguished for good.

I can’t say that any election fraud conspiracy theorists would be moved to abandon their ridiculous positions if they could have joined me in that middle school gym. It might help remind them that our voting process is elemental, and fundamentally sound. But the most devout lunatics would still probably claim that, after the machine took in the ballot, space satellites or long-dead Venezualan dictators flipped the vote (but only if the original vote was for the guy they liked).

The voting experience made me wonder whether we’ll ever get back to a point where election fraud conspiracy theories leave the semi-mainstream and go back to their rightful dark hole. I think we will. It’ll take a while, and some will cling to their Facebook-stoked (sorry, I mean “Meta”-stoked) paranoia. But I do believe that, ultimately, reason and reality will prevail. It was reassuring this past week to see candidates from both parties who lost elections actually acknowledge their losses, concede, and, in many cases, display grace towards their triumphant opponents.

The simple experience of casting a ballot in a modest middle school gym reminded me of the fundamental value of free and fair elections. It felt right, and good, to vote. It’s the simplest exercise in our democracy, and also the most important. It’s a right worth defending. 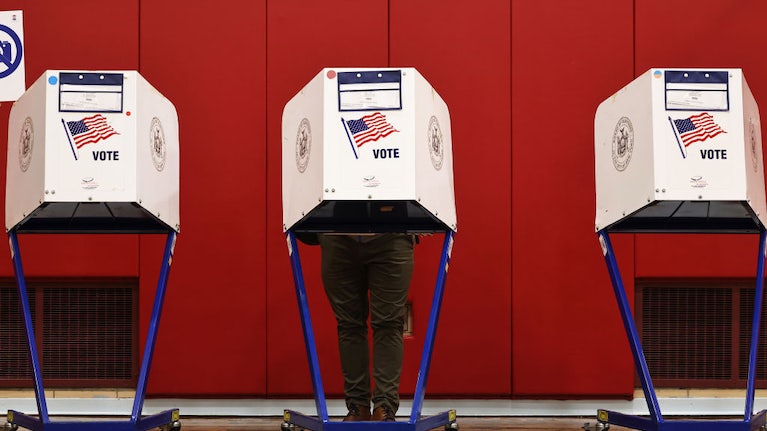 Note From Elie: Aural Closure in a Middle School Gym For All