This is exactly why Geoffrey Berman put up a fight.

It was, somehow, only two months ago when Attorney General William Barr announced — late on a Friday night (you know, the time when people announce news they’re super proud of) — that Berman, then the U.S Attorney for the Southern District of New York, would be “stepping down.”  I won’t give away any confidences, but my various text chains with other SDNY alums immediately lit up.  Suffice it to say — nobody was buying it.

Right on cue, about an hour after Barr’s initial announcement, Berman confirmed that Barr was full of it.  “I have not resigned, and have no intention of resigning, my position,” Berman declared.  You could practically hear the cheering coming from One St. Andrews Plaza in lower Manhattan.  Query why Barr would make a public statement that he had to know would be quickly exposed as a lie; Bill Barr is gonna do Bill Barr, I suppose.

At that point, Berman’s fate was sealed.  Barr came back the next day and informed Berman that, well, maybe you didn’t actually step down, but now you’re fired: “I have asked the President to remove you as of today, and he has done so.”  President Donald Trump promptly contradicted Barr, yet again, telling the press “I’m not involved” in Berman’s firing.  Purely mathematically speaking, one of Barr or Trump had to have been lying here.  Take your pick.

Berman’s resistance did more than buy himself an extra 20 or so hours in office.  When Barr first prematurely announced Berman’s departure, he also informed the public that Jay Clayton would be nominated as Berman’s eventual replacement.

Allow me to pause for a moment to highlight how ridiculous this choice would have been.  Clayton seems like a fine fellow, and he has a good resume, including his current stint as Chair of the Securities and Exchange Commission.  But the guy has never worked a single day in his life as a prosecutor.  Putting a complete rookie at the top of the SDNY is like making me the starting shortstop for the New York Yankees.  (I’m available if needed.)

But after Berman resisted, the powers-that-be made a key concession: they agreed to give the job to Berman’s deputy, Audrey Strauss, at least on a temporary basis.  I don’t know Strauss personally, but she is well-regarded among SDNY alums.  Most importantly, she is a career public servant and neither a political appointment nor an inexperienced pretender.  In the normal circle of prosecutorial life, Strauss should have been the person to replace Berman.

So rather than Clayton, an unqualified non-prosecutor carefully selected by Barr (or Trump?), at the helm, the SDNY ended up with a proven, non-political career prosecutor who was raised in the SDNY’s tradition of fierce independence.

Now, don’t get me wrong: the SDNY is, in the end, part of the United States Department of Justice, under the supervision and oversight of the attorney general.  But a strong, independent U.S. Attorney can make it difficult, even impossible, for the attorney general to step in and squash or influence a case.  While the Justice Manual requires U.S. Attorneys to notify the Deputy Attorney General about certain sensitive matters, that notification provision is subject to some level of interpretation.  A U.S. Attorney can assiduously call up the Deputy AG in advance of every major move — or the U.S. Attorney can give the Deputy AG one early heads-up that a case exists and then take it from there on her own.

Any way you cut it, the indictment of Trump’s former chief strategist  Steve Bannon by the SDNY is yet another black eye for Trump.  In one of the more brazen and bizarre fraud schemes you’ll ever see, Bannon and three others allegedly stole millions of dollars from poor saps who donated to something called “We Build the Wall,” which, the sales pitch went, would donate proceeds to help build a southern border wall (you know, the same one Mexico was supposed to pay for).  Hold on to your seats for a stunning twist: Bannon and the others just pocketed the cash and used it to pay for their own lives of luxury.  Who ever could have seen that coming?

Predictably, Trump immediately began the distancing game.  “I haven’t been dealing with him for a long period of time,” Trump explained.  Trump also declared that Bannon worked “for a small part of the administration very early on.”  Sorry, Mr. President: the man helped engineer your 2016 election victory — you can’t simply disown him now.

We don’t have any way to know whether or how quickly Bannon would have been indicted if Clayton had taken over.  Perhaps Barr would have instructed a pliable newcomer like Clayton to kill the case, or to slow-play it.  Perhaps Clayton simply wouldn’t have been comfortable moving forward so quickly, in merely his second month as a prosecutor.  Or maybe the indictment would have sailed along as it did anyhow, with Barr letting things play out in the natural course and Clayton acting decisively to bring the case.

We do know this for sure: public confidence in the continuing independence of the SDNY is, and should be, far higher with Strauss in charge than with Trump and Barr’s hand-picked novice running the show.

I have little to no faith in Barr’s political independence.  He already has proven himself, repeatedly, to be an unprincipled sycophant bent on using the Justice Department to serve Trump’s political ends.  But even Barr’s obstructionism has its limits — most importantly, at the Hudson River and the East River, two of the geographical boundaries of the SDNY.

Even now, during the tenure of a president and attorney general who have politicized the work of the Justice Department like no other duo in modern history, the SDNY has managed to carry on in its proud tradition of independence.  And with a tested SDNY veteran like Strauss at the helm, even Bill Barr and Donald Trump cannot change that.

To receive Note from Elie articles in your inbox, sign up to receive the CAFE Brief newsletter sent every Friday. 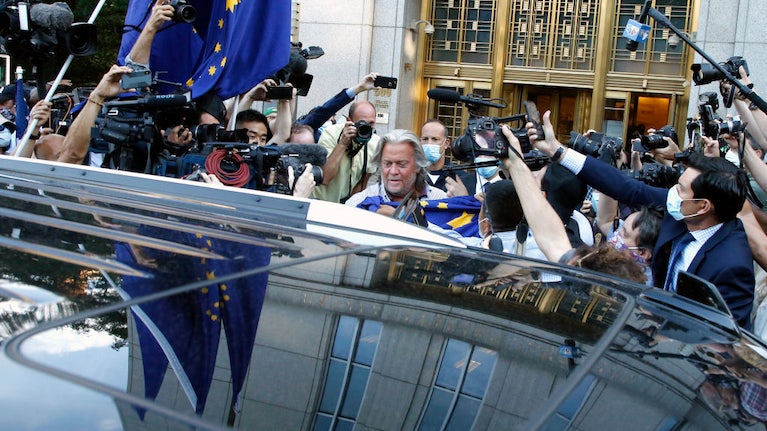