A weekly Note from Elie is part of the CAFE Brief, and Insider members can listen to a recording of the note the same day. Please enjoy Elie reading this week’s note, “Cannonballs Into a Pool of Corruption,” and read his note in your inbox every Friday.

If corruption were a swimming pool — forgive me, it’s been a hot summer and the town pool is closed — Attorney General William Barr has cannonballed in, gleefully making a spectacle of himself and soaking everyone around him.  His interference in politically-charged Justice Department cases has been brazen and unapologetic, almost celebratory.

And now that Barr has thoroughly undermined the Justice Department’s core criminal enforcement function, he has begun to dip a toe in a new, potentially even more dangerous pool of corruption by signaling his willingness to challenge the outcome of the 2020 election — should the results break against President Donald Trump, of course.  Barr already has trampled norms and the law to help Trump before; why would he stop now, with the stakes higher than ever?

Let’s start by running down Barr’s rap sheet.  He has repeatedly lied to the public, on issues ranging from the Mueller report to the removal of the United States Attorney for the Southern District of New York.  He has been called out publicly on his deceit by a Republican-appointed federal judge, by Mueller himself, and by nearly 2,000 former Justice Department prosecutors (including me) who served under both parties.  He has undermined his own Justice Department prosecutors in high-profile cases involving Trump’s political advisors Michael Flynn (who pled guilty, twice, to lying to the FBI about his contacts with a Russian official) and Roger Stone (convicted by a jury of lying to Congress to protect the Trump campaign, among other crimes).

Indeed, Barr has committed full bore to a prolonged campaign to appease the President and prop up his rage-tweet of the moment.  And Barr has, for the most part, gotten away with it.  Sure, he has invoked public ire from Justice Department alums and others who care about rule of law, and he has occasionally been asked a pointed question or two by Congress or the media.  But by and large, Barr sits content with his cheshire-cat grin, smug in his view that, as he put it, “History is written by the winners.”

Now that he has gutted Mueller’s work and re-written the history of Russian interference in the 2016 election, Barr has begun ominously teasing his next big endeavor.  In a recent interview with NPR’s Steve Inskeep, Barr ranted about the looming threat of massive voter fraud in the 2020 election.  Barr opined that mail-in ballots present “so many occasions for fraud there that cannot be policed. I think it would be very bad.”  He also raised “the possibility of counterfeiting”; when pressed on whether he had evidence to support this claim, Barr responded, “No, it’s obvious.”

Let’s take a moment to appreciate the audacity of this response.  When asked for evidence of a dramatic assertion he had just made, Barr conceded that he did not — but that it was “obvious.”  How does that work?  Aren’t things that are “obvious” the easiest to prove?  If I told you that it’s cold in Antarctica — well that’s obvious and, hence, eminently provable.  I’m trying to envision what would have happened if, back at the SDNY, I had made an important assertion about a case, a judge asked me for evidence to support it, and I replied, “No, it’s obvious.”  (I’m confident: it would’ve been ugly).  It’s a good thing real Justice Department prosecutors don’t follow the boss’s lead.

Barr’s assertions about voter fraud are, first and foremost, just plain wrong.  As the director of MIT’s Election Data and Science Lab put it with refreshing bluntness in NPR’s own post-mortem of the Barr interview, “He was talking about very specific things and they were nuts.”  Another NPR recap quoted election law experts who derided Barr’s theories as “preposterous” and “false.”  The Trump administration formed a commission to study the issue of voter fraud, but it was disbanded after it found, essentially, nothing of note.

Just look at Barr’s own Justice Department.  It is a federal crime to commit fraud involving voting or elections.  Of the over 60,000 federal cases filed by Barr’s Justice Department in 2019, how many of them involved fraud relating to mail-in ballots?  Well, Barr certainly hasn’t pointed to any — and heaven knows he’d use a poster child if he had a good one.  And DOJ’s own statistics, which break down its annual prosecutions according to subject matter, don’t even list voter fraud or election fraud as a recognized category of offenses — though the statistics do list categories as narrow as “Corruption — Pension Benefit,” with a grand total of three total cases charged in 2019.  Yet voter fraud doesn’t even rate its own line item, or even a mention, in DOJ’s accounting of its own caseload.

So where is Barr getting his information?  He couches his answers not in terms of facts or evidence but rather what he “thinks” or believes to be “obvious,” without evidence.  Remind you of anyone?  It can’t be coincidental that Barr’s newfound dedication to eradicating nearly non-existent voter fraud follows Trump’s interest in the subject.

Indeed, Trump’s tweet frenzy about mail-in ballot fraud prompted Twitter to slap him with a humiliating but well-deserved fact-check label (“Get the facts about mail-in ballots”).  Predictably, Trump’s rhetoric has now escalated to the point where he will not even commit to accepting the results of the 2020 election.  In a recent interview with Fox News, Trump declared “I think mail-in voting is going to rig the election.”  When asked if he would accept the election results, he responded (twice), “I have to see.”

Cue Bill Barr.  As with the Mueller investigation, the Flynn case, and the Stone case, Trump puts out the signal and then Barr snaps to attention, mimicking the paranoid tone and non-factual conclusory declarative nature of Trump’s claims.  It’s like the chemistry that sometimes develops between elite NFL quarterbacks and receivers; at a certain point, Pat Mahomes doesn’t have to tell Tyreek Hill to go long — a quick glance and a nod can do the trick.

Here’s why this could matter so much.  If Trump challenges or resists the results of the 2020 election, then Barr will be a vital — even necessary — accomplice.  A recent piece in Newsweek explained how Trump could lose the election but still remain president.  In short: if Trump loses but certain swing states are close enough to flip the outcome, he could challenge the results in those states, run out the clock to the December 14 deadline for appointment of electors, and then rely on the House of Representatives to keep him in office.

While there are variations on this scenario, all of them involve Barr’s acquiescence and participation.  And with his loony but familiar-sounding remarks about election fraud, Barr sent a distinct signal to Trump:  I’m game if you are.

Trump and Barr don’t even need to conspire secretly anymore.  They do it right in front of us.  They’ve joined forces before to engineer politically advantageous results for Trump — on Mueller, and Stone, and Flynn, and the SDNY.  Now they’re gearing up to do it again.  Only this time, the stakes could be much higher.

To receive Note from Elie articles in your inbox, sign up to receive the CAFE Brief newsletter sent every Friday. 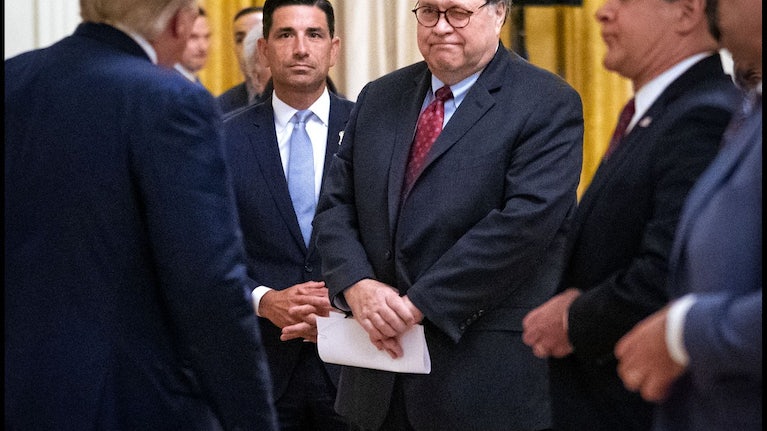 Note from Elie: Barr Cannonballs Into a Pool of Corruption