The Note From Elie is part of the free weekly CAFE Brief newsletter. Audio recordings of Elie’s Note are part of the CAFE Insider membership.

Of all the putdowns I ever received from a federal judge — there really weren’t many, but there certainly were a few — the sharpest was this: “Counsel, you’ve already needlessly climbed out on a limb, and now you are in the process of sawing that very limb out from under yourself.”  It still makes me laugh because it was so pithy and biting.  I’ll admit, I have always wanted to repurpose the line and use it on somebody else, but the right situation just hasn’t arisen.  And my putdowns naturally tend to be a bit lower-brow than this.  (All you court-watchers wondering who said the line in question to me: Judge Lewis Kaplan of the SDNY.  If you’ve appeared in front of him, you’re nodding your head right now).

Judge Kaplan’s line applies perfectly to the Justice Department’s recent effort to conjure support — some support, any support — for President Trump’s false narrative that mail-in balloting poses a grave risk of fraud.  It’s no secret why Trump has pushed this fiction so doggedly and so hysterically of late: he aims to undermine public confidence in mail-in balloting, and he’s laying a foundation to try to contest the election results as a whole, if they don’t favor him.

What’s striking is just how far the Justice Department has degraded itself to prop up Trump’s infirm wishcasting.  First, Attorney General Barr needlessly climbed out on limb by echoing Trump’s baseless contentions, without factual support.  In a June 2020 interview with NPR, Barr picked up on the President’s escalating rhetoric and opined that mail-in ballots present “so many occasions for fraud there that cannot be policed. I think it would be very bad.”  He also raised “the possibility of counterfeiting.”  But when pressed on whether he had evidence to support this claim, Barr responded, “No, it’s obvious.”

And in his July 2020 Congressional testimony, Barr tried and failed again to conjure the demon of massive fraud in mail-in ballots.  After Barr pushed the notion that foreign countries might commit mass fraud through mail-in ballots, a House member asked Barr whether he had any evidence to back his claim.  “No I don’t,” Barr conceded, “but I have common sense.”  Common sense and logic are great, but they don’t go far with zero evidence.

By the time Barr sat down for an interview with CNN’s Wolf Blitzer in early September 2020 — somehow this was only a few weeks ago, though it feels like much more — Barr had to know the mail-in ballot question was coming.  And it seemed, for a moment, that Barr had some actual proof.  Barr proudly declared that “[e]lections that have been held with mail have found substantial fraud and coercion. For example, we indicted someone in Texas, 1,700 ballots collected, he — from people who could vote, he made them out and voted for the person he wanted to. Okay?”  Barr could cite no other cases or statistics, but he had one example and it sounded pretty good.

Things quickly fell apart; this is where Barr cut out the limb from under himself.  First, despite Barr’s claim that “we” indicted someone, it turns out that there was no such prosecution by the Department of Justice.  Rather, Barr referred to a state-level prosecution in Texas.  It also turned out Barr fudged key facts.  A former prosecutor who oversaw the case said the initial investigation focused on “potentially 1700 fraudulent ballots, but we did not uncover that, at all.”  He explained, “We actually thought there was voter fraud initially, and we couldn’t find it except that little tiny case” involving a single ballot.

The Justice Department went into damage-control mode, issuing an official explanation for Barr’s embarrassing performance: “Prior to his interview, the Attorney General was provided a memo prepared within the Department that contained an inaccurate summary about the case which he relied upon when using the case as an example.”  Way to stand tall and own up, Mr. Attorney General — just point your finger downstream at some poor staffer who mucked it up.

That whole exercise went so poorly that the Justice Department just had to repeat it.  The U.S. Attorney for the Middle District of Pennsylvania — swing state, anybody? — issued a bizarre press release announcing an ongoing investigation into “discarded” ballots.  This inquest, according to the initial public statement, had uncovered nine discarded ballots, all of which contained Trump votes.

Right off the bat, the announcement raised red flags.  First, it is a core practice of prosecutors across the country, and a specific rule of the Justice Department itself, to never publicly disclose the existence of a criminal investigation.  Prosecutors get so used to saying it that it almost becomes a mantra: “We do not disclose the nature or existence of pending investigations.”  Here, the Justice Department broke that rule and went even farther when it publicly dished on the details, even specifying that the ballots at issue all had been cast for Trump — a detail that would be irrelevant to any criminal case, but quite handy to one of the candidates.

Now, why ever would Barr’s Justice Department break protocol in this one particular case?  Could it be because it happened to lend support — flimsy support, but something — for Trump’s election narrative?  The White House quickly answered that question when White House Press Secretary Kylie McEnaney, Chief of Staff Mark Meadows, and Trump himself all jumped on the Justice Department announcement, citing it as an example of fraud run amok.

Beyond the impropriety of issuing this kind of a press release, the Justice Department, yet again, just got its basic facts wrong.  In another sorry takeback, the Justice Department had to issue a “Revised Statement” amending its numbers, from nine Trump votes down to seven (funny how the initial exaggerations always go one way).  And the alleged conduct at issue, on further examination, was less sinister than bureaucratic.  The investigation reportedly focused not on partisan election officials sneaking Trump ballots into the garbage can for electoral advantage like the Matthew Broderick character in the movie Election.  Rather, some voters apparently had mistakenly sent in ballots using the envelopes designated for ballot requests; election workers opened those envelopes, expecting to find ballot requests but instead finding actual ballots.  This was nowhere near as evil, or even intentional, as originally advertised.  Another limb sawed off.

Barr’s goal is obvious: provide Trump and his campaign with some fodder — anything, even one anecdotal example — that they can hold up as an example of voter fraud.  The entire exercise is intellectually dishonest to begin with.  Of course there have been instances of ballot fraud, but they are so infrequent that they hardly even register, mathematically — 0.0025% of all votes, according to the Washington Post and a nonprofit election organization.  (That’s 1 instance of fraud for every 40,000 ballots cast).  But, hey, hold up one tangible example and pound on it and it might stick in people’s minds.

Of more concern, we’ve once again seen exactly where Barr stands and what he is willing to do to help Trump.  Trump won’t be able to steal this election without accomplices and enablers.  Barr is sidling up for his place at the front of that line.

The Note From Elie is part of the free weekly CAFE Brief newsletter. Audio recordings of Elie’s Note are part of the CAFE Insider membership. 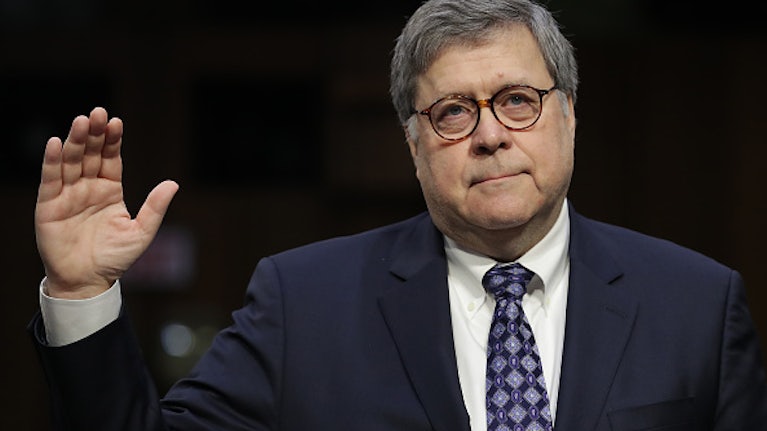 Note From Elie: Barr Saws Off One Limb After Another