When President Joe Biden declared publicly that the Justice Department should bring criminal contempt charges against people who defy subpoenas from the January 6 Committee, he was right on the merits — but wrong on the bigger principle.

Here’s what happened. As the sun set on October 15, Biden landed in a helicopter on the White House lawn and detoured to talk with the assembled press. Kaitlan Collins, a colleague of mine at CNN, asked Biden whether he had any message for those who defy subpoenas from the January 6 Committee. Biden answered, “I hope that the committee goes after them and holds them accountable.” Collins followed up by asking whether, in Biden’s view, DOJ should prosecute congressional subpoena-defiers, and Biden responded, “I do, yes.”

The Justice Department, to its credit, promptly fired back. In an extraordinary but necessary public statement, DOJ reminded the American public — while casting a glance up Pennsylvania Avenue at the White House — that “the Department of Justice will make its own independent decisions in all prosecutions based solely on the facts and the law. Period. Full stop.” (You know they mean business with the “period. full stop.” thing.)

Before we move along, let’s get Donald Trump out of the way. When I made a point on air at CNN recently that Biden and members of the January 6 Committee were putting political pressure on Garland to charge — an inarguably true assertion, unless you consider the President of the United States explicitly calling for federal prosecution of a specific group of people somehow not political pressure — I was met with a smattering of nuanced, thoughtful Twitter responses along the lines of “HOW DARE YOU QUESTION BIDEN, TRUMP WAS SOOOOO MUCH WORSE, I GUESS YOU ARE FINE WITH WHAT HAPPENED ON JANUARY 6 YOU INSURRECTIONIST, GO TO HELL.” (I’m paraphrasing.)

But here’s the thing. First, Biden himself conceded that “The way I said it was not appropriate.” To anybody who maintains Biden did nothing wrong: he has admitted he was wrong, by this statement, so that’s not up for debate. Second — and this is a more generally applicable point — there’s plenty of room, a continental divide, and oceanic gap, between “equally as bad as Trump” and “perfectly fine.” In other words: Biden’s conduct can be far better than Trump’s, but still wrong. “But Trump was worse” is not a legitimate all-purpose defense of Biden, or anybody else.

So what’s the problem, exactly, with the President saying he believes that people who defy subpoenas should be prosecuted? (Steve Bannon most likely, though Biden did not mention specific names.) Loyal readers of this column might recall that I, too, have argued for prosecutions of Bannon and his ilk. (They’d be right; check it here.) The difference, of course, is that Joe Biden is the President, and I’m just some guy in Jersey. I did not nominate the attorney general, I have no ability to remove him, and public perception of and confidence in DOJ’s political independence in no way turns on my actions.

Let’s allow the Biden White House itself to elucidate the problem. The day before Biden made his comments, his press secretary, Jen Psaki, told the media that the decision to prosecute “would be up to the Department of Justice, and it would be their purview to determine. They’re an independent agency. They’re independent. They would determine any decision on criminal prosecutions. I’d point you to them and, of course, the committee.” Paski nailed it. This is exactly how it ought to be.

And back in January 2021, when Biden nominated Merrick Garland as attorney general, Biden declared, “We need to restore the honor, the integrity, the independence of the DOJ of this nation that has been so badly damaged.” (Not naming names, ahem, Bill Barr.) Biden continued: “I want to be clear to those who lead this department who you will serve: You won’t work for me. You are not the president’s or the vice president’s lawyer. Your loyalty is not to me. It’s to the law, the Constitution, the people of this nation.” Garland, in turn, vowed to do his part to restore DOJ’s independence. He promised to enact “policies that protect the independence of the department from partisan influence in law enforcement investigations [and] that strictly regulate communications with the White House.” To his credit, Garland did just that, issuing new limits on communications between DOJ and the White House in July 2021.

The problem isn’t so much that Biden might influence Garland’s ultimate prosecutorial decision. I’m willing to give Garland the benefit of the doubt. He has demonstrated political independence throughout his career and thus far during his tenure as attorney general. (I’ve been critical of Garland for being too timid, but not for being political; if anything, he seems to have become a bit trigger-shy on anything that might even look or feel vaguely political.)

But there’s no way to know for sure whether Biden’s comments might weigh on Garland’s mind, even in some subtle manner. Imagine if the most powerful person at your workplace casually mentioned she hoped you’d come out a certain way on a certain issue. It would be tough to completely ignore that.

More importantly, and more knowable, Biden’s comments certainly have created the public appearance of political influence. Now, if Garland does eventually charge, there will be a basis on which a detractor — or perhaps even a defendant, in court — can argue that the decision to prosecute was politically motivated. It looks bad and, when it comes to prosecution and the Justice Department, appearances and public perception matter.

No, this isn’t as bad as Trump. Biden did not go behind the scenes to influence Garland, he didn’t ask Garland to do something borderline illegal (or worse), and he did not issue a direct order that DOJ charge any particular person. And, to Biden’s credit, he walked back his statement. Give Biden credit here. It’s good to see politicians own up and correct themselves from time to time.

Both Biden and Garland have made restoration of the Justice Department’s independence a top priority. I’m grateful for that, as a DOJ alum, particularly on the heels of unprecedented politicization and corruption of DOJ under Trump and Barr. But now the trick for Biden and Garland is making good on their vows. It’s one thing to say DOJ will be truly independent. It’s another to act like it. 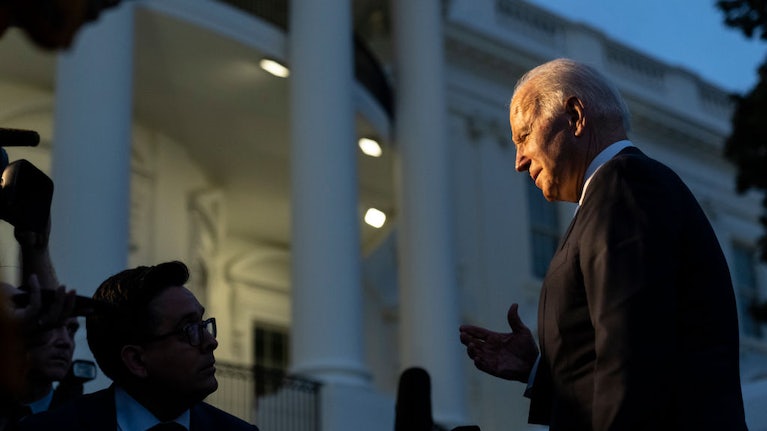