Death row was, if anything, a bit quieter than I imagined it would be.

The correctional facility was in Raiford, Florida; don’t think the Florida where your grandma retired to do pool aerobics, think the swamp-hot Florida of low-slung huts and ramshackle gas stations up by the Georgia border.  Death row was about 100 yards behind the main prison building.  I still remember the sensation of walking from that main prison building out to death row — outdoors, under the sun, but encaged by a long, narrow tunnel of chain link fencing on both sides and up above.  It was hamster-like.

Death row itself is around the size of a large high-school gym, with cells along the four walls — not technically a “row,” actually more of a “death square.”  Inmates are confined individually 23 hours per day, so there’s no common area, no weights, no cafeteria, no bustle like in most prisons.  Space is coffin-tight.  Individual cells are six feet by nine feet.

When the guards brought my client, Merrit Sims, into the attorney meeting room, we both had to point our knees towards opposite walls so they didn’t bump together.  I was a year out of law school, working at a Washington, DC law firm, the junior associate working with a partner on a pro bono case challenging Sims’ conviction for murder.

Long story short: in 1991, when Sims was 24 years old, he got pulled over by a police officer while driving his cousin’s car, which the cousin had reported stolen.  Sims is around 5 foot 9, maybe 180 pounds, while the officer was linebacker-sized, over 6 feet tall and weighing over 250 pounds.  Also: Sims is Black, and the officer was white.  After struggling to put Sims in cuffs, the officer unleashed a torrent of racial epithets and eventually overpowered Sims, putting him in a standing chokehold from behind and promising to kill him.  Sims, short on breath and close to passing out, flailed his arm backwards, grabbed the officer’s gun out of its holster, and then shot and killed the officer.

There never was any question that Sims killed the officer.  Sims confessed when he was arrested, and testified to it on the stand at his 1994 trial in Florida.  His only defense was self-defense; he shot the officer to avoid being badly injured or killed himself, his court-appointed lawyer argued at trial.  Though it wasn’t much of a trial at all.  The whole thing took eight working days — about the length of a typical low-level gun case in the federal system.  The jury deliberated for about half a day before finding Sims guilty of murder in the first degree.  After a penalty hearing lasting all of three hours — where Sims was represented by a different court-appointed lawyer, this one 80 years old and handling the final case of his non-illustrious career — the jury recommended that Sims be put to death.

As I sat across from Sims in the tiny meeting room on death row for the first time, he gave a wan smile and reached towards me with both hands — which were shackled together, and to his waist — and offered an awkward, limp handshake.  We had exchanged letters, but this was our first time meeting.  “I know I’ll never get out of jail,” he said.  “But I just don’t want to get killed here.”

Neither of us knew it then, but ultimately my colleagues at the firm would save Sims from the death chamber.  In 2007 — I had left the firm by then and joined the SDNY — after a series of hearings and appellate arguments, the Florida Supreme Court threw out Sims’s conviction, finding he had received constitutionally ineffective assistance of counsel.  Sims was removed from death row and eventually took a plea to a lesser charge.  He is scheduled for release from prison in 2037.  He’ll be 71 years old, if he makes it that long.

Something about death row sticks with you.  You have to be there to understand it.  The sense not of panic, but of quiet.  Not dread, but resignation.  Still: I hadn’t thought about Sims in a long time.

But his image came back to me when I saw the announcement in July 2020 that, for the first time in nearly two decades, the Justice Department would resume executing federal prisoners who had been convicted and sentenced to death.  DOJ selected the defendants carefully, focusing on those who had committed the most hideous acts.  All of the inmates marked for execution had murdered children.  Don’t read the press release about what these defendants did, if you don’t want to be sickened.

While federal law still provides for the death penalty in certain circumstances, at the time of the DOJ announcement this past summer, no federal inmate had actually been executed since 2003, when the government put to death an Army veteran who had kidnapped, raped, and beaten to death a 19-year-old fellow soldier.  The Justice Department carried out two other executions in 2001 — including the monstrous domestic terrorist Timothy McVeigh, who murdered 168 people when he blew up a federal building in Oklahoma City.  Before that, there had been no federal executions since 1963.

So at the time of DOJ’s announcement this past summer, the federal government had carried out no executions in 17 years, and only three in 57 years.  Yet in just the four months since its announcement, the Justice Department has now executed eight inmates — including one about two weeks ago.  Be honest: did you know that?  Did you notice?  I can’t say I did, until I dug into the research for this article.

And DOJ is not done yet.  Last week, Attorney General William Barr — knowing he has only weeks left in office — ordered a last batch of five executions.  Barr even ordered one execution each on January 14 and 15, 2021, during what will be his (and President Trump’s) final week in office.  The Justice Department now is seeking to turn back the clock on methods of execution, crafting a new rule that would permit the government to use electrocution or firing squads in lieu of lethal injection in some circumstances.  Yes, firing squads.  In 2020.  In the United States.

I write this not to argue for or against the death penalty.  What strikes me, however, is how this drastic policy change to re-initiate executions has largely gone unnoticed, or at least under-noticed.  Much public focus during Trump’s final stretch in office has, rightly, been on the corrosive, systemic corruption and degradation of the Justice Department and other crucial government institutions, and on the election whose results Trump has been manically and delusionally trying to deny.

Governmental behaviors, norms, and ethics will change at DOJ under a Biden administration.  And the next attorney general surely will have plenty of cleanup to do after Barr has decimated the Department’s credibility and political independence.  But let’s not overlook the impact of pure policy change.  The incoming Biden administration already has made clear it intends to at least pause federal executions; Biden’s criminal justice platform explicitly calls for legislation ending the federal death penalty.  To put a fine point on the change soon at hand: inmates who will be killed during the final week of the Trump administration would have been spared under the new administration that takes office just days later.

The swirl of corruption around Trump, which likely will intensify down the lame-duck stretch, is so intense that it has essentially overwhelmed public notice of even the most drastic policy changes.  We are so focused on the lying, the self-dealing, the denialism, and the self-martyrization that we sometimes overlook the actual business of government itself — even on matters of life and death. 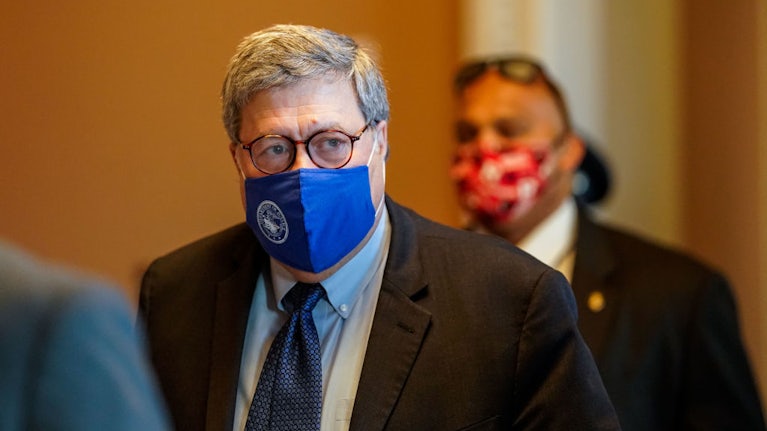 Note From Elie: Death Row Sticks With You