I represented a murderer, once. His name was Merrit Sims.

In 1991, when Sims was 24 years old, he was pulled over by a police officer in Miami Springs, Florida. A struggle broke out, the details of which were contested at trial in Florida; Sims claimed he acted in self-defense, and the prosecution disagreed. (You can read the full accounting of the events, as set forth by the Florida Supreme Court, here.) This much is not in dispute: Sims – who was at least six inches and a hundred pounds smaller than the police officer – eventually used the officer’s own gun to shoot and kill him.

A Florida jury convicted Sims, and the judge sentenced him to death. Years later, I worked at a law firm that took on Sims’s case, pro bono, and got his conviction vacated on constitutional grounds. Sims had not received reasonably effective assistance of counsel at trial, the Court found. After this ruling, Sims pled guilty to second-degree murder and was sentenced to 25 years behind bars. He is due to be released in 2037, when he will be 71 years old.

Now: does this make me a murderer? Does the representation mean that I somehow sympathize with people who have killed? That I vouch for, or am responsible for, Sims’s actions? Does this mean that I disagree with criminal laws prohibiting murder?

I’m referring, of course, to one bogus line of attack (among several) on Judge Ketanji Brown Jackson, who is virtually certain to become the next justice confirmed to the United States Supreme Court. Some Republican senators – obviously casting about for any vulnerability, given her impeccable substantive qualifications – have focused on Jackson’s prior work as a public defender.

Senator Lindsey Graham questioned Jackson about her work on behalf of Guantanamo detainees, misleadingly suggesting that she had accused George W. Bush and others of being “war criminals.” (In fact, Jackson wrote in a brief that acts of torture would constitute war crimes under a specific federal statute – big difference). Senate Minority Leader Mitch McConnell fretted before this week’s confirmation hearing that Jackson might have some “special empathy for criminal defendants.” (As if empathy was somehow a bad quality in a judge). The Republican National Committee worried that her “advocacy for these terrorists was ‘zealous,’ going beyond just giving them a competent defense.” (As if a defense lawyer should represent her clients, but only half-heartedly.) Republican Senator Chuck Grassley, the ranking member of the Judiciary Committee, proposed a confounding distinction between what he termed “Bill of Rights attorneys” and “‘criminal defense lawyers’ who disagree with our criminal laws.” (As if there was one group of warm-and-fuzzy defense lawyers and another cadre of cold-hearted anarchists.)

These arguments are nonsensical. Criminal defense lawyers have the toughest job in the profession, in my view. Take it from this longtime prosecutor: it’s easier to prosecute than to defend. Prosecutors get to be the “good guys,” in the most straightforward worldview, while defense lawyers have to represent clients who are unseemly, dangerous, and, yes, very often guilty. But to suggest that defense lawyers somehow are apologists for their clients, or vouch for their clients’ conduct, or oppose criminal laws in general, is a cheap line of attack that’s either disingenuous or woefully uninformed. (I suspect the former; senators on the Judiciary Committee must know better.)

I don’t mean to revert to civics-class basics here, but sometimes we need to go back to the fundamentals. They’re first principles for a reason, after all. The Constitution guarantees competent counsel to every person accused of a crime, and professional ethics require that any such lawyer represent her client – dare I say, at the risk of offending the RNC – zealously. We don’t do trial without representation, and we don’t countenance lawyers who half-ass it and pull their punches in deference to the delicate, hairsplitting sensibilities of Grassley and his ilk.

While the right to competent counsel is itself a fundamental Constitutional guarantee, those lawyers in turn serve as the primary guardians of other due process rights afforded to the accused. Defense lawyers put the government to its burden of proving criminal charges beyond a reasonable doubt, and within the strictures of the Constitution. Anybody who has a problem with that ought to take it up with the Framers.

If anything, Jackson’s experience as a defense lawyer makes her an even better candidate for the Court, bringing meaningful diversity of professional perspective. The Court currently has seven justices who have worked in some capacity as prosecutors. Samuel Alito and Sonia Sotomayor were the real deal, Alito as a U.S. Attorney in New Jersey and Sotomayor as an Assistant District Attorney in Manhattan. John Roberts and Neil Gorsuch never actually tried cases but both (very) briefly held top positions for the Justice Department. Clarence Thomas was once an Assistant AG in Missouri. Stephen Breyer and Brett Kavanaugh did short stints with special prosecutors (Watergate and Ken Starr, respectively). Feel free to heavily discount the prosecutorial chops of everyone but Alito and Sotomayor, but all seven have some reasonable claim to the title “former prosecutor.”

If and when she is confirmed, Jackson will become the first Supreme Court justice with substantial defense experience since Thurgood Marshall. She will be the only voice on the Court who has seen the process from the other side of the courtroom. She alone understands the unique challenges of criminal defense work, and she can bring vital perspective on the need to hold prosecutors accountable and to protect the constitutional liberties of the accused.

Despite the attacks on Jackson’s record as a defense lawyer, she will almost certainly be confirmed by the Senate. Of course she will make history, long overdue, as the first Black female justice. And, in another key respect, Jackson might change how we think about what a Supreme Court justice looks like. The conventional view has long been that a lawyer takes a professional risk when they do criminal defense work. Why attach yourself to people who may have done horrible things, when that work will be held against you if you have political aspirations? Better to work as a prosecutor, rack up the convictions, and then market yourself as the guy who took down gangsters, or drug dealers, or crooked politicians.

Jackson’s confirmation could clear the way for young lawyers to do the indispensable and difficult work of defending the defenseless, without fear that it might come back to haunt them. Perhaps, someday, defense work will be properly valued in a prospective judge. It takes guts and courage to defend the accused. It’s about time we recognize that in the political arena. 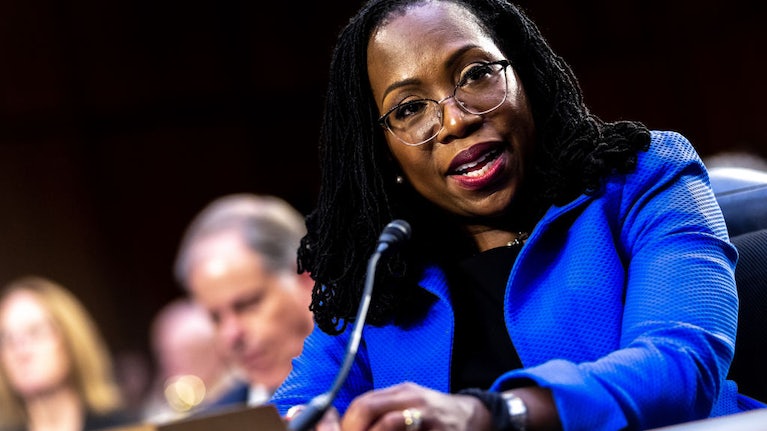