When I was a young prosecutor with the SDNY, I once had to take a search warrant application over to the chambers of Judge Robert Sweet.  This was a common practice: you’d call the deputy, make an appointment, walk the papers over, and wait while the judge reviewed and (hopefully) signed them.

That day, the deputy took the legal documents from me and brought them back to Judge Sweet’s office.  As I waited in the chambers’ common area, my eyes wandered to the Judge’s framed commission — the fancy parchment-looking document with old-timey font, an official seal, a bunch of “hereuntos” and “wheretofores,” and dramatic signatures, issued by the government when a judge is confirmed to the bench.

Moments later, Judge Sweet walked out, holding my search warrants, now signed.  I was mildly embarrassed that I had been caught gawking at his artifacts, even though they were on display on the wall.  But Judge Sweet, who passed away in 2019, truly lived up to his last name.  He was soft-spoken, universally respected, and just plain kind.  He quickly made me feel better about my semi-snooping: “Jimmy Carter,” Judge Sweet said, referring to the president who had nominated him in 1978, whose name appeared at the top of the commission.  And then Judge Sweet added warmly, “Maybe before you were born?” (Close; I was three.)

I tell this story because it strikes me now: when I was at the SDNY, I had no idea which president had nominated virtually any of the forty or so federal district court judges before whom I regularly appeared.  Nobody ever said, “Oh, he’s a Reagan appointee, that’s good” (or bad), or “Clinton put her on the bench, so that’ll help” (or hurt).  It just never came up (unless you happened to be snooping around a judge’s chambers).

But things are different now.  When I started writing in the media in 2018, I typically would not identify which president had nominated any particular judge.  But I quickly noticed a steady stream of feedback from editors and readers alike: okay, but which president appointed that judge?  Now, I understand why.  It’s not how things should be — ideally, judges would operate, and be perceived, in a political vacuum — but it’s how things are.

Former President Donald Trump (first time I’ve typed that) is largely to blame.  Among his many destructive legacies is this: unlike any other modern president, Trump has made sport of attacking judges — personally, politically, publicly, and often viciously.

It started during Trump’s campaign for the presidency in 2016, when he memorably launched an overtly racist attack on Judge Gonzalo Curiel.  Trump claimed Curiel could not fairly preside over a lawsuit involving Trump University — gosh, I feel like a fraud even typing that idiotic two-word phrase— because of the Judge’s “Mexican heritage.”  (Curiel grew up in Indiana, and his parents were immigrants from Mexico.)  In Trump’s twisted worldview, as he phrased it, “I’m building a wall, it’s an inherent conflict of interest.”

Often during Trump’s single term in office, when a judge did anything he disliked, he predictably lashed out — often by noting that the judge had been appointed by a Democratic president.  After a series of losses relating to immigration policy, Trump decried “Obama judges,” prompting a rare public rebuke from Chief Justice John Roberts.  Trump later personally strafed the judges on the Roger Stone, Paul Manafort, and Michael Flynn cases.  And he tried to rile up his base by promising that Joe Biden would appoint “RADICAL LEFT JUDGES!”

Trump’s minions have taken notice and followed suit.  Just a few months ago, when a federal district court judge in Pennsylvania rejected a frivolous election lawsuit, Trump’s laughingstock of a legal team explained away the loss by deriding the “Obama-appointed judge” (who, they failed to mention, had a long history of involvement in Republican political circles and was a member of the conservative Federalist Society).

There’s an unfortunate but inevitable outcome to this growing tendency to note the political party of the president who nominated a judge.  Whenever a judge appointed by a Democratic president ruled against Trump, it was seen by some as a “well, of course”-type thing: “Well, of course that judge ruled against Trump; he’s an Obama nominee.”  And when a Republican judge sided against Trump — particularly those he appointed himself — it made the decision hit extra hard.  For example, when the court of appeals affirmed the aforementioned dismissal of a Trump election lawsuit, many — including myself — rubbed it in Team Trump’s faces by noting that two of the judges on the panel had been nominated by George W. Bush and the third by Trump himself.  And when the Supreme Court rejected two other frivolous election challenges — one from Pennsylvania Representative Mike Kelly and the other from the Texas attorney general — I was not alone in pointing out that all three Trump-appointed Justices had ruled against him.

I am not suggesting that judges come to the job as blank slates.  Nor do I believe that judges robotically call “balls and strikes,” as seemingly every judicial nominee now claims during confirmation hearings.  Every judge carries his or her own legal, ideological, and political viewpoints.  Of course Republican presidents tend to nominate judges with proven conservative credentials while Democrats tend to nominate more liberal judges.  That’s inevitable, and probably just fine in our democratic (lower-case “d”) system.

But the problem comes with the suggestion — which now, increasingly, goes beyond “suggestion” and into outright “accusation” — that judges are in the bag for the political party of whatever president nominated them.  Trump stoked this impression when he proclaimed that he needed to get Justice Amy Coney Barrett on the Supreme Court before the election so she could help him out if the opportunity arose on an election-related lawsuit.  Turned out, to Barrett’s credit — not so much.

Let’s pause for a moment to appreciate the merits of life tenure.  Whatever you may think of life tenure,  put this on the positive side of the ledger: when a judge has permanent job security, she doesn’t owe a damn thing to the president who nominated her, or to anyone else, and there’s no incentive to curry favor.  Life tenure is, if nothing else, liberating.

There is a bright side, I suppose.  Trump’s final burst of legal mendacity — his spate of lawsuits challenging the election result — was so patently meritless that it forged a unique coalition of judges across geographical, political, and ideological lines who have said to Team Trump, essentially in unison: you gotta be kidding me.  This may be a blip.  I suspect it is.  But the arguments made by Trump and his lawyers were so dreadful that they brought together even the most ideologically opposite judges.  (In that sense, I suppose, Trump was something of a uniter.)

I don’t propose that, in the wake of Trump’s turbulent tenure, we should adopt some idealistic (and unrealistic) view of who judges are or what they do.  They’re not automatons, and they do bring pre-existing personal and ideological views to the bench.  But we need to have faith that judges will do their best to get it right.  And, as we move on from Trump, we need to make a conscious effort not to glibly attribute rulings that we dislike to some political bias tied to whatever president nominated the judge, years before.

I hope we eventually can reach the point where it’s more trivia than anything else to note which president appointed which judge — as with Judge Sweet and Jimmy Carter.  And I look forward to the day when every mention of a judge need not be preceded by the name of the president who nominated him or her: Clinton, Bush, Obama, Biden, or — yes — even Donald Trump himself. 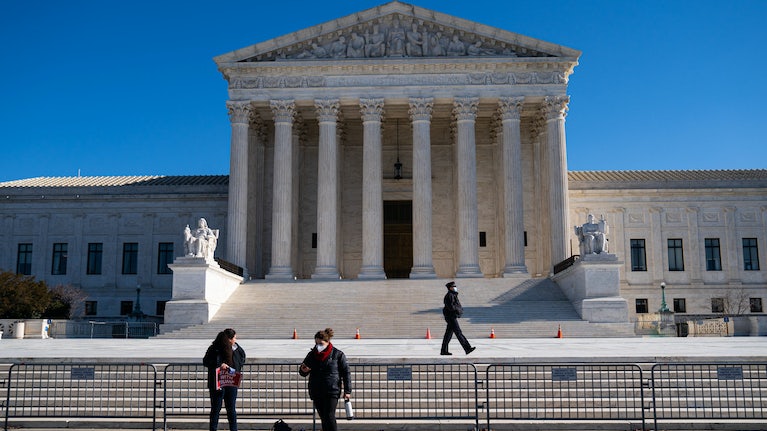 Note From Elie: Faith in Judges