It’s over, almost.  One-term, soon-to-be-former President Doanld Trump has 68 days left in office (or, if you’d prefer, 1,632 hours).  Much of the focus between now and noon on January 20 will be on Trump’s departure — particularly given the potential for him to unleash a vindictive wave of pardons, firings, and other measures to settle scores and trash the place on his way out.  But while Trump tends to suck up all the attention, let’s not forget the others who will be leaving power along with him.

It’s time to give a proper send-off to those around Trump — those who supported him, prodded him, used him for their own advancement, and defended him even at his lawless, indecent worst.  They, too, will be scrounging for empty copier paper boxes and taking their diplomas down off the walls in the coming weeks.  Let us take a moment to wish them adieu as well.

Farewell to the enablers.

First up: Ivanka Trump and Jared Kushner.  If you ever wondered why we have anti-nepotism laws on the books — here’s why.  Incidentally, the Trump administration twisted those laws to empower Ivanka and Jared in the first place.  Prior administrations under both political parties concluded that the president could not hire relatives to fill key White House advisory roles, but the Justice Department issued a brand new opinion on the very first day of Trump’s term that reversed course and opened up the West Wing to these vacuous incompetents.

It’s insufficient to call Ivanka and Jared entitled and overpromoted.  Both were dangerously unqualified to make any kind of decision relating to the affairs of the United States.  And both exercised their inherited power with galling incompetence and, at times, malice.  Just look at the list of subject matter areas purportedly in Kushner’s White House portfolio: criminal justice, health care, Middle East peace, immigration, the environment.  Well, here we are four years later, and: check, check, check, check, and check.  Solved it all.  Well done, Jared.  (Sorry, I’m just treating him as he has been treated throughout his life, with undeserved plaudits for doing essentially nothing).

As for Ivanka, it’s hard to put a finger on exactly what she did for the past four years.  What would she even claim as her greatest actual accomplishment?  She did declare publicly that the Administration’s child separation policy was “a low point for me as well.”  (For you?  That’s who we’re concerned about here?)  She then proceeded to do absolutely nothing to stop it.

(I’m not even going to spend more than two sentences on Donald Trump, Jr.  He wasn’t technically anything in our government, and heaven help us if he ever is.)

Hit the bricks, Steven Miller.  The world will not miss your pent-up rage, your racist stylings, your backroom engineering of everything from Trump’s apocalyptic rhetoric (“American carnage”) to the child separation policy at the border — arguably the single biggest disgrace of the Trump presidency.  History will revile you.  Jason Miller — no relation, other than in Trump-worshipping hackery — you, too, can pack your bags and hit the road with your nonsense conspiracy theories and delusional spin on Trump’s failed response to the Covid crisis.  (Another key political advisor, Steve Bannon, saw himself out long ago, and now is looking at a federal indictment in the SDNY and potentially a long stretch behind bars; he’ll likely join Roger Stone, Michael Cohen, Paul Manafort, Michael Flynn, George Papadopoulos, and Rick Gates on the list of Trump-adjacent convicts).

Your car is waiting, Mike Pompeo.  The outgoing Secretary of State marked his term with unapologetic self-dealing (who can forget the on-staff, taxpayer-funded dog walker?), flagrant violations of the Hatch Act (lowlighted by an address at the Republican National Convention from a hotel roof in Israel), false statements about the possibility of a delayed election (declaring that DOJ had the power to decide to push the date back), and a refusal to testify about his involvement in the Ukraine scandal and attendant coverup.  Pompeo capped off his ignominious run by making light of the potential for a non-peaceful transition of power, a move more befitting an aspiring anarchist than the Secretary of State.  Don’t be a stranger, Mr. Secretary.  Oh, and please hold the door for your fellow Cabinet member Betsy Devos, whose indifference as Secretary of Education was surpassed only by her arrogance.

Good riddance to Rudy Giuliani, who prodded Trump into an impeachment and then capped off a four-year run of unhinged interloping by delivering a dud of an October surprise in the convoluted Hunter Biden story that nobody understood or cared about.  On the other hand, he did give us the delightful, unifying tableau of a boisterous campaign ending with a whimper in the parking lot of Four Seasons Total Landscaping; we all needed that laugh, regardless of party affiliation.  Maybe we’ll see you again Rudy, depending on the outcome of the SDNY’s criminal investigation.  (Or when you appear again on the Russian state propaganda network).  And there’s the door, Alan Dershowitz.  Your only remaining public relevance will be your ongoing involvement in civil lawsuits involving Jeffrey Epstein.  I hope you both enjoyed your final moments of manic, sputtering semi-relevance.

Finally, farewell to William Barr.  (You didn’t think I’d leave him out, did you?)  I’ll have plenty more to say about Barr but, for now, let’s bottom-line it: no attorney general in modern history, and perhaps ever, has done more to corrupt and demean the Justice Department.  Barr has lied, twisted the law, trashed cherished prosecutorial norms, and used DOJ as a tool to carry out and prop up the President’s political agenda.  Outside of Trump himself, nobody else has done more damage to the rule of law in the United States.

DOJ, like the rest of our government, has survived the Trump administration.  Our institutions will endure and evolve.  It will take time, but we will recover.

Trump is, of course, the primary culprit for his own actions and for his Administration’s failures.  But he never could have wreaked such havoc and destruction on our country without a team of willing accomplices by his side.  Historian Jon Meacham said on a recent episode of Stay Tuned that Trump’s most ardent loyalists have “changed their obituaries.”  Indeed.  History will remember them for their incompetence, their arrogance, their gross abuses of power and the public trust.

Trump’s enablers have had their run and done their damage.  And now they can all walk out of public life together. 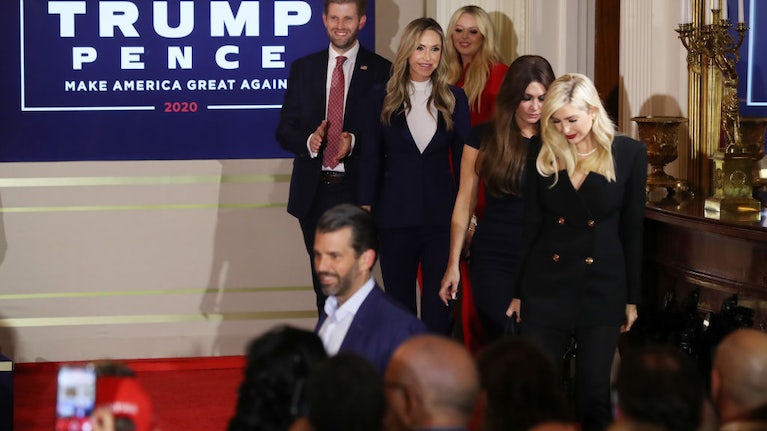 Note from Elie: Farewell to the Enablers