Over the years, you’ve probably heard plenty from me, and others of my ilk, about the prevailing organizational culture at the Southern District of New York.  I can confirm that everything you’ve read or heard about those lofty, noble principles — independence, credibility, fairness — is true.

But here’s one core SDNY precept that doesn’t get as much public attention: you’re there to kick ass.

Don’t get me wrong.  Your job at the SDNY is not to mindlessly charge as many people as possible and then max out every sentence just to be a tough guy; prosecutorial discretion, reason, and mercy always must play a part.  What I mean is that there’s an ethic at the SDNY that it’s not enough to just make the easy cases — to go after the lower-ranking players in a scheme, the foot soldiers, the ones on the streets physically committing crimes — without going after the real power brokers at the top.

This played out often throughout my career as a prosecutor.  If you rounded up a handful of street-corner heroin dealers but failed to work the case up the chain to the bulk suppliers, it was deemed a failure.  “Wow, congrats, you cleaned up a couple of mopes,” we’d needle each other.  The same ethic applied in my mafia cases.  It was important to nab the soldiers, the guys on the streets collecting envelopes of cash and handing out beatings and sometimes worse.  But ultimately, we were taught to have our eyes on the leaders and to work up towards the top of the org chart.

The Justice Department must take the same approach towards the January 6 assault on the Capitol. It is absolutely necessary that prosecutors sweep up every last person who stormed the Capitol. The list of potentially applicable federal crimes is thicker than the menu at The Cheesecake Factory: entering a restricted federal government building without authorization, destruction of federal property, commission of unlawful acts on the Capitol grounds, riot, even sedition (which, despite its imposing nomenclature, can be as straightforward as proving that the defendants conspired “by force to seize, take, or possess any property of the United States contrary to the authority thereof”).

Most importantly, of course, prosecutors must charge and seek the maximum punishment of life imprisonment for those who had any hand in the murder of Capitol Police Officer Brian Sicknick, or any of the other people who died during the attack.  (On a related note: even over a week later, it remains difficult to truly comprehend that the President of the United States whipped up a mob that murdered a federal law enforcement agent on the grounds of the Capitol, and that President remains in office.)

But if prosecutors stop there — if they decline to expand their focus to include the leaders who are responsible for the attack on the Capitol — then they will fail to do their jobs.  Our laws provide various means to hold people accountable even for crimes they do not directly commit with their own hands.  The federal aiding and abetting statute imposes criminal liability on anybody who “aids, abets, counsels, commands, induces or procures” the commission of a crime.  More narrowly, but also applicable here, it is a federal crime to incite a riot.

And, yes, I’m looking first at Donald Trump himself — as well as Rudy Giulaini (“trial by combat”) and Representative Mo Brooks (“Today is the day American patriots start taking down names and kicking ass”).  Anybody who helped to whip up that mob needs to get a hard look from the Justice Department.

I’m not going to make the full argument here for or against criminal charges against Trump or the other frothing firebrands who took the mic.  And there’s no magic formula to identify the line between First Amendment-protected political speech and criminal incitement (or aiding and abetting).  But even looking solely at the public record, there’s more than enough to investigate and potentially to charge.  Trump’s own rhetoric before and during the rally lays the foundation: “stand back and stand by,” “will be wild,” “we’re gonna walk down to the Capitol;” “you have to show strength and you have to be strong;” “if you don’t fight like hell, you’re not going to have a country anymore.”

And consider the scene laid out in front of Trump and his acolytes as they spoke from the podium, just moments before the mob advanced on the Capitol (precisely as Trump had instructed) — a roaring crowd waving Trump flags, many dressed in military-style garb, some waving Confederate flags, some even wearing Nazi gear.  As it turned out, members of that crowd bore everything from zip ties — what might they have been used for? — to firearms to explosives.

Most telling of all: Trump’s own comments after the mob had ransacked the Capitol and spilled American blood on the floor.  He tweeted (shortly before he was banned from the site), “Go home with love & in peace.  Remember this day forever!”; “We love you.  You’re very special.  Go home,” he told his loyal followers.  “There These are the things that happen,” he rationalized, praising the frenzied mob as “great patriots.”

Ask this simple question: don’t Trump’s comments after the attack show that the rioters did precisely what he hoped and intended?  Those are tough facts for a defense attorney.

The impetus now is on prosecutors, specifically the leaders of the new Justice Department who will take office five days from now.  I can’t speak highly enough about the deeply experienced and talented leadership team that is set to take over: Merrick Garland as Attorney General, Lisa Monaco as Deputy Attorney General (disclosure: a friend and, as you likely know, a CAFE alum; some of us go places), and Vanita Gupta as Associate Attorney General.

All of them have worked on the frontlines of the Justice Department for years, so they understand what it’s all about.  This will be one of their first major tests.  Do they settle for prosecutions only of the people who stormed the Capitol?  (That is an absolute minimum necessity, and I have full confidence those cases will be charged and prosecuted vigorously.) Or do they press on, and work their way up the chain, to at least investigate and seriously consider whether criminal charges are appropriate against the soon-to-be-former President and perhaps others around him?

I don’t care if investigations of Trump and other power players ruffle some feathers.  I don’t care if some claim those investigations might be “divisive” or “political.”  Prosecutors have a job to do, and making nice isn’t one of them.  So yes, our next slate of Justice Department leaders must of course bring credibility and independence and fairness to these cases.  They don’t need me telling them that; I was in high school when some of them were in their early years as federal prosecutors.  But they also need to go in there and kick some ass. 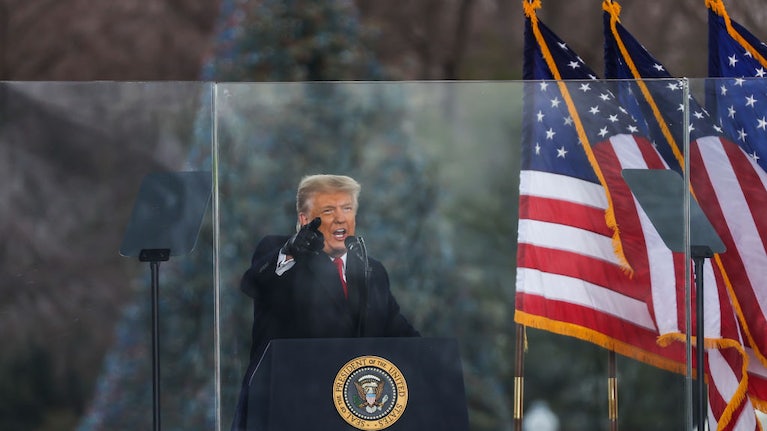 Note From Elie: Get the Big Fish