A weekly Note from Elie is part of the CAFE Brief, and Insider members can listen to a recording of the note the same day. Please enjoy Elie reading this week’s note, “History, Not the Jury, Will Render the Verdict,” and read his note in your inbox every Friday.

A few weeks before life locked down, early one morning, I was walking north on Tenth Avenue in Manhattan when a yellow cab pulled alongside me and slowed down to my pace.  “Hey, man” the driver said, with a friendly tone.  I thought he was offering me a ride, so I started to wave him off when he followed up:  “Is Trump gonna get indicted?”  (Look, I’m not at the Madonna / Cher / Preet level of first-name fame; I’ll settle for “Hey, man”).  My on-the-spot response: “Nah, can’t see it happening.”  The driver sped back up and, as he pulled away, let out a crisp “Ah, f**k.”

I get asked this question frequently, probably more than any other: Will the Department of Justice indict Donald Trump once he’s no longer president?  There’s usually a glimmer of hope in the eyes of the questioner, a strain of “Please tell me it’s so.”  But I can’t.  You are free to react as the cab driver did, because it is, indeed, infuriating.  Trump certainly has earned himself an indictment — perhaps many indictments, or at least one whopper with multiple counts — but it simply is not going to happen.

First things first.  There is no real question the President has committed crimes — on his way into office and once he sat behind the Resolute Desk.  Let’s draft up a hypothetical, never-to-see-light-of-day indictment in the case United States v. Donald J. Trump.

Count One: Campaign Finance Violations. The SDNY already has named Trump — “Individual-1,” in the most transparent anonymization of a name in human history —  as an unindicted co-conspirator in a scheme to make illegal hush money payments to two women who claim to have had affairs with Trump.  (Trump denies the affairs but certainly not the payments).  This was back before William Barr took over as Attorney General.  No way in hell does he permit the SDNY to flex its independent muscle and ding the boss so hard in a public filing.  Sad to think how much more integrity DOJ had under — I can’t believe I’m about to say this — Jeff Sessions.

Count Two: Obstruction of Justice.  Somehow, the term “obstruction of justice” seems insufficient to describe what Trump did to derail Robert Mueller’s investigation of Russian interference in the 2016 election.  We need something bigger — maybe “obliteration of justice” or “destruction of justice.”  You know all the particulars by now — the eleven acts of obstruction laid out by Mueller, all the lying and the firing and the lying about the firing.  (We could break this out into eleven separate counts, but at the SDNY I was taught to keep it simple and strong, so let’s go with one consolidated hammer).

Count Three: Solicitation of a bribe, attempted extortion, and solicitation of illegal foreign campaign contributions (take your pick).  This is, of course, Ukraine.  Barr made sure DOJ never even took a look, House Democrats made a strategic decision to impeach for abuse of power rather than a particular crime (though they laid an ample factual foundation), and 52 Senate Republicans voted “see-no-evil.”  But the facts remain: Trump withheld hundreds of millions of dollars in desperately-needed foreign aid, conditioned on Ukraine announcing an investigation of his political rival.  I’d gladly stand up in front of a jury — preferably a real jury, not a cooked Senate one — and argue for conviction.

This doesn’t even include all the add-ons, the acts that normally would have been presidency-ending, or at least presidency-scarring, but now live on as mere “remember when?”-type footnotes: witness tampering (remember when Trump openly attacked Ambassador Marie Yovanovitch while she testified in the House?); witness retaliation (remember when Trump took revenge on Lt. Col. Alexander Vindman and Ambassador Gordon Sondland, booting them from their jobs as post-impeachment payback?); obstruction of justice (remember when Trump fired a string of Inspectors General who were investigating or had already found wrongdoing by his Administration?).

When you see Trump’s conduct laid out end-to-end, it’s remarkable that he has escaped not only indictment-free, but essentially consequence-free.  Never has the DOJ policy against indicting a sitting president done more work.  Having the spineless lackeye Barr as AG has helped Trump skate, too.

But how about the next administration?  2021 or 2025, Democratic or Republican (but let’s be honest, only a Democratic successor would seriously consider it, unless Mitt Romney or George Conway takes the White House).  Whenever Trump’s term ends, he’ll lose the force field-like protection of the DOJ no-indictment policy, and Barr will be gone.  So it’ll be game-on, right?

Almost certainly not.  I see four reasons — two potential legal stumbling blocks and two intractable political ones — why Trump will never end up on the wrong side of the “v.” in the indictment header.

First, legally, most federal crimes carry a five-year statute of limitations.  Trump’s conduct dates from late 2016 (the hush money payments) through, well, a couple weeks ago (the IG firings).  If he loses the election this November and is out in January 2021, no problem.  But if he wins and stays in office until 2025, his most serious conduct will be more than five years old.  There’s a legal argument that the statute of limitations should be “tolled” — put on hold, essentially — but that’s a coin toss, at best.

Second, Trump could receive a pardon.  Gerald Ford famously pardoned his predecessor, Richard Nixon, in 1974.  Trump’s successor — Joe Biden, Mike Pence, Kamala Harris, Nikki Haley, or whoever and whenever it might be — could do the same.  Or Trump could take care of himself and issue our nation’s first ever self-pardon.  Trump certainly believes he has the legal power to do so — “I have the absolute right to PARDON myself,” he tweeted, inexplicable all-caps his — and the Constitutional pardon power contains no explicit limitation (though it’s also possible the Framers never even considered the wacky possibility of a self-pardon in the first place).  The only way we’ll ever find out is if Trump pardons himself, and then DOJ indicts anyway — in which case the courts will decide.

Beyond these legal hurdles, imposing political obstacles remain.  First, an indictment of Trump would consume every ounce of public focus in a brand new administration.  Just picture it.  Imagine an actual criminal trial of Trump — in a courtroom, with a judge, a jury, a prosecution team, a defense dream team led by Rudy Giuliani (assuming he’s not behind bars), and a team of U.S. Marshals waiting to lock Trump up if convicted.  Nobody would focus on anything else that the new administration did.  Nothing.  Policy initiatives, new appointments, regulatory reform — who cares?  We’ve got a criminal trial of former president Donald J. Trump.  Theoretically, yes, public officials should do the right thing without worrying about how it will pull media focus and impact public attention.  But realistically, any new president or attorney general with an ounce of common sense would know: if you indict Trump, this is all you’ll be doing — or all anyone will care about — for the first year or two of your administration.  Realistically, who’s going to sign onto that?

Second — and there’s no technical way to put this — it just doesn’t feel right, it doesn’t feel American, to toss a former president in prison.  We’ve seen other countries — unstable, developing countries — do this.  But that’s not us, we think.  We are all about the peaceful transition of power, and it would spoil the mood on Inauguration Day to have FBI agents waiting outside the White House with handcuffs and an arrest warrant.  No doubt, Trump is testing the outer boundaries of this notion like nobody since Nixon (or perhaps ever).  He’s poking the lion with a pointy stick.  And he’s lucky enough and dumb enough (or is it smart enough?) to count on the lion swatting him away but never snapping into full-on attack mode.

If Trump ultimately does dodge responsibility, it’ll be a shame.  It won’t feel great.  It might be indefensible.  But, by design or by sheer happenstance, Trump has found a soft spot in our nation’s otherwise formidable system of laws and accountability.  It may make you feel like my disappointed cab driver, but the ultimate verdict on Trump will be rendered by history — not a criminal jury.

Listen to a recording of Note From Elie 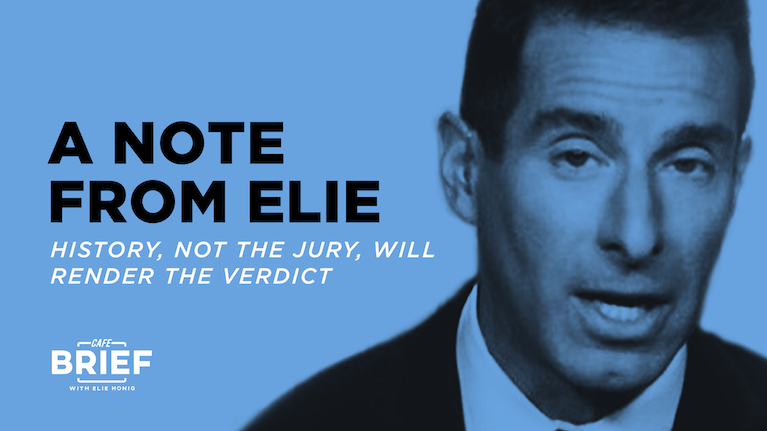 Note From Elie: History, Not the Jury, Will Render the Verdict