Ever since Senate Republicans shrugged their shoulders and acquitted President Donald Trump following last year’s impeachment trial, our congressional leaders seem to have abided by an unstated rule: just one impeachment per president.  The general attitude seemed to be, essentially — well, he’ll be tarred with the “impeached” label for all time, and we’re close enough to the next election, so better to just stand back and let it all be.

Of course, that’s not the law.  No president has ever been impeached twice, but it’s certainly allowed.  Double jeopardy applies to criminal law but not to efforts to remove public officials who abuse their power.

And, of course, Trump has run absolutely wild since his first impeachment, secure in the knowledge that he can’t (or more precisely, won’t) be touched.  Since then, he knowingly downplayed the threat of Covid as hundreds of thousands died (remember those Woodward tapes).  Russia put bounties on American soldiers and he did nothing.  Then Russia launched a massive cyber attack on the United States and was greeted yet again with utter passivity by the tough-guy Commander-in-Chief.  Trump pressured the Georgia Secretary of State to “find” enough ballots to give him the state by a single vote.  He encouraged the Vice President to defy the Constitution and overturn the election.  Yet Congress just counted the days until November 3 or, now, January 20.  “Let the voters decide,” we were told, and then, “It’ll be over soon enough.”

Enough is enough, and soon enough is not soon enough.  President Trump openly incited a riot, based on a premise of baldfaced lies about the election that he lost.  Predictably, his frothing minions dutifully obeyed, turning the United States Capitol building into a surreal, chaotic crime scene.

I know it’s January 8.  I know he’s gone twelve days from now.  But the House should immediately impeach Trump — yes, again; it’s allowed — and the Senate should convict and remove him.  (The House is on recess now, but they can, of course, come back to do their jobs.)  The Senate also should specifically vote to disqualify him from holding future public office (which, yes, the Constitution specifically permits).

Let me phrase it in the rhetorical inverse: why shouldn’t Congress throw Trump out?

Trump must be impeached and removed, first, purely for practical reasons.  He can do plenty more damage in the twelve days remaining in his term.  Even after his supporters stormed the Capitol, and four people died, Trump continued to incite further unrest: “stolen election,” “these are the things that happen,” “we love you, you’re very special,” “remember this day forever,” and the like.

And as long as Trump remains in office, he keeps his hand on the country’s power apparatus and can use those levers of power to dangerous ends.  He already has reportedly considered using military force to overturn the election (and thankfully was talked off that particular ledge by more level-headed advisors).  Unless and until he is removed, he remains Commander-in-Chief.  He’s in charge of the entire military and, yes, he has the nuclear codes.  He controls foreign policy.  Don’t think he’ll abuse that power over the next few days?  Did you see the U.S. Capitol this week?  You think he cares?

Even short of these worst-case scenarios, Trump can run wild with the powers of his office, and he has proven himself unfit and undeserving to hold any position of public trust.  He can — he will — go bonkers with the pardon power.  He might pardon his family members and himself, and maybe even worse (Rudy Giuliani, Ghislaine Maxwell, Capitol rioters; I put nothing past him).  He could jam up the federal government by issuing destructive executive orders, by firing public servants.  He has crossed into break-everything madness.  And if he isn’t removed, then sit back and watch him as he smashes away.

Beyond the practical considerations, Trump must be impeached and removed for the historic record.  We’re in unprecedented territory here but I think we can all agree on this bright-line rule: if you send an angry mob to the U.S. Capitol and they tear the place apart and spill American blood on the floor, then you’re done.  You don’t get a grace period, even if the end of your term is imminent.

And while we’re at it, the U.S. Senate should expel Ted Cruz and Josh Hawley.  Our Constitution allows the Senate to expel its own members by a two-thirds vote.  Why Cruz and Hawley, you may ask?  Because they embraced and amplified the lie of massive election fraud and used it to fan the flames of insurrection.  That’s why.  And for those doing the bottom-line calculus, there’s no partisan advantage here; the Republican governors of Texas and Missouri will pick other Republicans to replace Cruz and Hawley.  Pretty much anyone would be an upgrade on either.

I understand these things are unlikely to happen.  Temperatures cool down and, after all, January 20 is right around the corner.  I disagree with this kind of forbearance, but I understand reality.

But here’s something that must happen, impeachment or no: the Justice Department, and its soon-to-be Attorney General Merrick Garland, must investigate and prosecute every person who has any connection to the assault on the U.S. Capitol.  Start with the easiest cases.  Prosecute any person who unlawfully entered the Capitol, and max out the punishments against those who destroyed property, brandished guns, or caused bodily injury and death.  It’ll take time but there should be ample cellphone and surveillance footage to identify the primary wrongdoers.

And don’t stop there.  I’ve seen plenty of people casually throw out the word “sedition” over the past several months.  I purposefully declined to go there; it seemed overbroad and overheated.  Well here’s the specific definition of seditious conspiracy under federal criminal law: to “conspire to overthrow, put down, or to destroy by force the Government of the United States… or by force to seize, take, or possess any property of the United States contrary to the authority thereof.”  Or, for a less extreme option, federal law also prohibits incitement of a riot.

Garland must ensure that the next Justice Department takes a hard look — at the people who actually stormed the Capitol, sure, and also at those who incited them.  I understand why it’d be easier to ignore this whole mess and glide past it, or to hold up a couple window-breakers and call it a day.

President-elect Joe Biden reportedly wants his DOJ to avoid going down the rabbit hole of potential Trump crimes.  Perhaps he feels differently now.  But, as Garland (an accomplished federal prosecutor in his own right) surely knows, real prosecutors should not be driven by convenience towards the course of least resistance.  Even if the political terrain is rough, real prosecutors dig in, search for the truth, and pursue justice.  We don’t yet know if the politicians in Congress will do their jobs.  But I have faith that the prosecutors at the United States Department of Justice will do theirs. 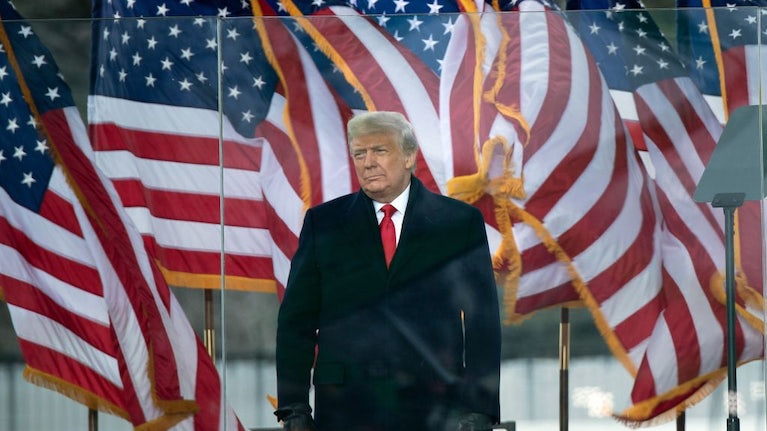