It has now, somehow, been a full year since the Capitol insurrection. And the House January 6 Select Committee realistically has the year ahead to complete its work – until a new House, likely with Republicans in control, takes office in January 2023.

To this point, the Committee deserves credit for its dogged pursuit of truth. It has, for the most part, conducted an aggressive, probing investigation. The Committee has issued subpoenas to dozens of key witnesses, including dedicated Trump loyalists, and, all told, it has interviewed hundreds of people. It has gone to federal court quickly and successfully to enforce contested subpoenas, and it has referred cases for potential criminal contempt charges when subjects have stonewalled without justification. Already, the Committee has uncovered startling new evidence that the effort to steal the election was a coordinated, long-term scheme executed by Trump and his inner circle, and that the January 6 Capitol attack was the natural (and perhaps intended) end result.

The Committee has gone hard after the truth, even if the quest might ruffle feathers among power players. But the Committee seemingly has made one notable if unspoken exception: its members have gone easy on their own colleagues in Congress.

One of the unusual features of this particular investigation is that several members of Congress are themselves victims, key witnesses, and maybe even more than that. That almost never happens – but, then again, attacks on the U.S. Capitol spurred by a president and enabled by his fiercest loyalists in the legislative branch almost never happen, either.

We’ve known for months that members of Congress have vital information about what happened on January 6. McCarthy spoke directly with Trump as the January 6 attack unfolded, begging him to call off his rioting supporters; Trump lashed back, “Well, Kevin, I guess these people are more upset about the election than you are.” McCarthy retorted, “Who the fuck do you think you are talking to?” (I will admit, the Jersey kid in me nodded in appreciation at that witty rejoinder.)

That’s a crucial conversation, obviously. The Committee has every right, and imperative, to look into it. Yet still, up to this moment, the Committee has not subpoenaed McCarthy or formally asked him to provide information voluntarily.

We also know that Jordan spoke with Trump on January 6. Jordan hilariously stammered and word-saladed his way through a torturous response when confronted on the issue – though he did, somewhere in his mess of a response, confirm that he had spoken with Trump that day. And we know that Perry acted as a middleman between the Trump White House and Jeffrey Clark, the mole who tried to run a coup inside the Justice Department.

Yet the Committee didn’t make a move towards any of their congressional colleagues until the end of December, when it politely asked Jordan and Perry if they might, pretty please, be willing to talk. No subpoena, just yet – heaven forbid, that might upset delicate congressional sensibilities. Unsurprisingly, Jordan and Perry both defied the Committee’s requests, mustering up plenty of self-righteous dander in the process.

Now the onus shifts back to the Committee. Will they absorb their rejections from Perry and Jordan, and claim, “Welp, we tried…” Or will the Committee take the obvious next step and issue subpoenas? And if (really, when) Perry and Jordan continue to defy, will the Committee hold them in contempt and send them over to DOJ for potential prosecution? The Committee did just that with non-members of Congress Steve Bannon and Mark Meadows. Why should Jordan and Perry (and perhaps others, eventually) be any different?

What’s behind the Committee’s reticence here? I see two factors at play. First, there’s good, old-fashioned cronyism. Members of Congress tend to treat their fellow Senators and Representatives with, shall we say, a soft touch. How else to explain why the Committee refused to disclose the names of their congressional colleagues who sent damning text messages to Meadows – “confidential ongoing investigation,” and all that jazz – yet freely called out by name private citizens who had done the same? You can love Sean Hannity, Laura Ingraham, and Donald Trump, Jr., or you can hate them, or you can fall somewhere in the middle. But the fact is they’re private citizens and the Committee had zero basis to treat them worse than members of Congress. If anything, elected federal officials should be held to a higher standard than private citizens.

Second, the Democrats who comprise a majority in the House and on the Committee can see what’s coming. Odds are, they’ll lose the House majority in the 2022 midterm elections. That’s not me playing political forecaster – that’s simply a matter of established historical record. Democrats currently hold a slim majority of 221 to 213 in the House. Recent history tells us that first-term presidents tend to lose ground in their first midterm elections; the party of every president from Jimmy Carter through Donald Trump, with the sole exception of George W. Bush, has lost House seats in the president’s first midterm. Consider President Joe Biden’s lackluster approval ratings and it seems virtually certain the House will flip.

If and when that happens in early 2023, it’ll be time for payback. The potential House Republican majority – led, in all likelihood, by would-be Speaker McCarthy – will raise retributive hell. Have any doubt? Take it directly from McCarthy, who already publicly threatened to retaliate against phone service providers who comply with routine, lawful congressional subpoenas: “a Republican majority will not forget,” he hissed. If McCarthy openly vows to use his political power to wreak vengeance upon innocent, private third-parties, imagine what he’ll do to his Democratic tormentors. So, the Committee’s thinking seems to go, if we pull up a bit on these guys now, maybe they’ll go a little lighter on us when they’re in control.

Here’s how I’d put it to the Committee. If Democrats lose the House majority next year, the new Republican majority is going to do what new majorities often do: settle scores. But guess what? That’s going to happen no matter if the Committee goes soft on fellow members of Congress, or does its job correctly and fully now.

So why not dig in and do the right thing? Why not fight for the truth and deal with the consequences as they come – particularly if those consequences are transparently petty and retributive, and may even backfire. Perry, Jordan, and McCarthy are all key witnesses, and perhaps more than that. They need to be held to account, even if the battle promises to be pitched.

No, it’s not the easiest approach to play hardball with other members of Congress. But if the Committee aims to build on the strong foundation it has established and discover the whole truth, it’s a necessary step. 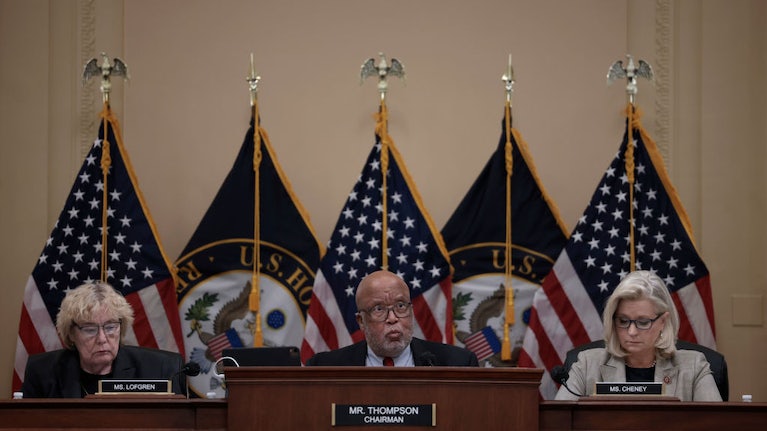