When Donald Trump took office as President, he wanted to hire his preposterously unqualified daughter and son-in-law to fill key White House advisory positions. Problem was, the anti-nepotism laws and prior presidential practice — not to mention common sense and good government — seemed to prohibit it. Yet somehow, on the very first day of the Trump administration, the Justice Department issued a novel “legal opinion” (scare quotes mine) saying in essence, “Nepotism laws be damned, hire all the kids!”

See, the way they teach it in school, law dictates outcome. Decisionmakers — presidents, mayors, judges, prosecutors — consult with the law to determine what’s permitted and proper, and then act accordingly.  Let the law light the way. But real life teaches a different lesson. Far too often, the process works in reverse. The policymaker starts with the desired outcome (“Let’s hire the kids to run Middle East policy and response to the opioid crisis!”), and then gins up whatever legal justification it takes to get there.

We saw this process of result-oriented legal backfilling play out regularly during the Trump administration, beyond the Ivanka-Jared debacle. After he barely dodged a bullet from the Mueller report, Trump wanted to, in his own words, “fight[] all the subpoenas” from Congress. So DOJ conjured a bogus legal justification for that categorical stonewalling approach (later roundly thrashed by the courts, but good enough to run out the clock). The administration later wanted to prevent a whistleblower’s explosive complaint about Trump’s shakedown of Ukraine from going to Congress. The Justice Department, in turn, concocted a silly opinion that the law actually, somehow, applies to everybody but the president.

This is why it was so different, and so refreshing, to see President Joe Biden revert, on at least one important issue, to the old fashioned way of doing things: first determine what the law permits, and then act accordingly. Imagine that.

During his campaign, Biden promised to cancel at least some student debt, up to $10,000 per borrower.  But pressure has built on Biden from within the Democratic party to increase that figure to $50,000.  Biden has refused to go that far, declaring at a recent CNN town hall event flatly that, with respect to $50,000 of loan cancellation, “I will not make that happen.”

Beyond the dispute about the amount of debt cancellation, a game of hot potato has broken out among Democrats as to who will actually get the job done. Biden has pointed at Congress to pass legislation; White House Press Secretary Jen Psaki has stated that the President is “calling on Congress to draft the proposal” for $10,000 of debt relief and that Biden “looks forward to signing it.”

But two can play the “I call on you” game.  Congressional leaders, in turn — including Senate Majority Leader Chuck Schumer and Senator Elizabeth Warren — have pointed right back up Pennsylvania Avenue and urged Biden to get it done himself, through executive action.

But Biden — a savvy political lifer, well-versed in the art of burden-shifting — had a counter-move ready to go. He got the lawyers involved.  Psaki announced that Biden would send the legal question — whether the president has the authority to cancel student debt by executive action — over to the Justice Department. Presumably, Biden will then act accordingly (though Psaki didn’t go quite that far in her statement).

To an extent, Biden is seeking political cover here. Perhaps he expects (or has even been assured, wink-wink) that the DOJ legal review will come back with a conclusion that, no, sorry, Mr. President, you just can’t do this thing that you clearly don’t want to do anyway. Indeed, if Biden felt strongly enough about cancelling student debt, he’d just do it through executive action and then fight the inevitable lawsuits later. On the other hand, the fact that congressional Democrats profess to be in favor of student loan forgiveness, but don’t want to actually pull the trigger themselves through legislation, tells you there’s general recognition of political downside here.

On balance, the legal question itself is a fairly close one, and there’s no guarantee that a formal review by DOJ will come back one way or the other. Schumer, Warren, and others point to the federal Higher Education Act, which grants the U.S. Secretary of Education the authority “to modify, compromise, waive, or release any right, title, claim, lien, or demand, however acquired, including any equity or any right of redemption.” On its face, that provision appears to authorize the federal government to call off at least some student debt. On the other hand, there is a legitimate question about whether the President acting through the Education Secretary (without congressional authorization through legislation) has the power to waive a wand and cancel what could amount to $400 billion of debt. (I suspect this is where the political maneuvering comes from; everyone wants to take credit for relieving debt, but not for sticking the lenders with a massive bill.)

So while there plainly is some degree of political gamesmanship at play, it is worth noting, and applauding, that Biden has placed the horse (the law) before the cart (his action). And he is taking some political risk by doing so; it could turn out that DOJ returns an answer that Biden plainly does not want — namely, that the president does have executive authority to cancel student debt. That happens, and should happen, in our system of laws: sometimes a policymaker wants to take some action that the law simply forbids (or, in this case, the policymaker doesn’t want to do something that the law permits).

That’s exactly why we have laws in the first place. Far too often in recent years, elected officials and others in power have come to view the law as a means to an end, as a malleable tool to be bent to meet some predetermined conclusion. The Trump administration didn’t invent this approach — it has existed since the dawn of law itself — but they certainly elevated it, and treated the law almost exclusively as something to be either weaponized or worked around.

Wherever you stand on the merits of the student debt issue, give Biden some credit for letting the law play its proper role.  The ideal remains one worth pursuing: in our democratic system, laws exist not to provide cover, but to show the way. 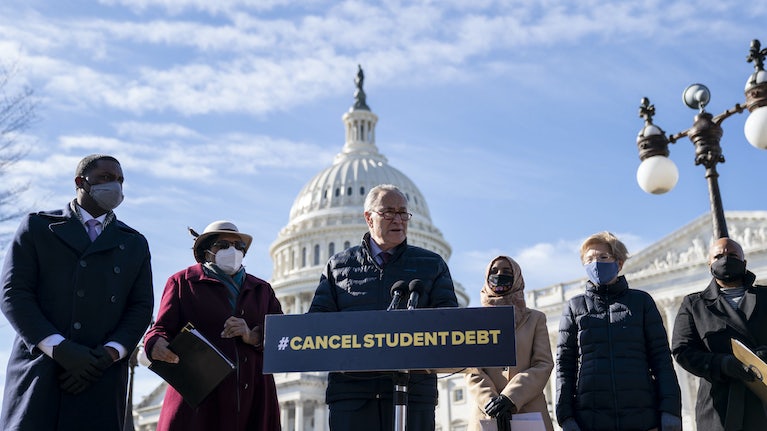 Note From Elie: Law Before Action