In his farewell address, George Washington stressed the need for national unity and urged Americans to put the wellbeing of the nation ahead of party loyalty.

Ronald Reagan, in his final speech to the nation, invoked the image of the United States as a “shining city on a hill.”

Barack Obama left office with a speech reminding Americans to cherish “[t]he freedom to chase our individual dreams through our sweat and toil and imagination, and the imperative to strive together, as well, to achieve a common good, a greater good.”

And, this week, Bill Barr ended his tenure as attorney general with a fawning, sycophantic mess of a “resignation” letter for the ages.

I put “resignation” in quotes because it’s not entirely clear exactly how this all went down.  The Trump-Barr relationship started to falter when, in early December, Barr publicly stated that the Justice Department had not uncovered evidence of widespread voter fraud, dealing a devastating blow to Trump’s efforts to prop up that feeble narrative.  Then, news leaked last week — in a Wall Street Journal story attributed to a single “person familiar with the matter” — that Barr had taken steps to prevent public disclosure of ongoing DOJ investigations of Hunter Biden during the runup to the election.

Trump immediately lashed out, tweeting “Why didn’t the Fake News Media, the FBI and the DOJ report the Biden matter BEFORE the election.”  Trump quickly escalated his rhetoric, heaping Jeff Sessions-level public scorn on Barr.  Trump retweeted a comment about the Journal story and added his own pithy commentary: “A big disappointment!”  He followed up with another tweet lashing out at Barr: “IF Biden gets in, nothing will happen to Hunter or Joe.  Barr will do nothing, and the new group of partisan killers coming in will quickly kill it all.”

At that point, it was only a matter of when and how, not if, Barr would exit.  It was the world’s least glamorous soap opera: Who would dump whom first, Trump or Barr?

The answer, it turned out, landed somewhere in the hazy middle.  On Monday, Trump announced by Twitter that, after “a very nice meeting… Bill will be leaving just before Christmas to spend the holidays with his family.”  Trump declared in an uncharacteristically syrupy-sweet tone that, “Our relationship has been a very good one, he has done an outstanding job!”

Nearly simultaneously, Barr issued his own valedictory masterpiece, a farewell letter that runs just over one page.  Yet it’s so dense with drippy nonsense that it’s tough to get through.  So now, join me and we’ll navigate it together.  (I’m here to help.)

In the first paragraph, Barr quickly undoes one of the very few courageous positions he ever took — his recent statements about the lack of evidence of election fraud.  Barr opens his letter by noting “I appreciate the opportunity to update you this afternoon on the Department’s review of voter fraud allegations in the 2020 election and how these allegations will continue to be pursued.”  To be clear: there is absolutely no legitimate purpose to include this information in a resignation letter.  Why would Barr feel the need to memorialize in writing — in a largely ceremonial farewell letter, keep in mind — that he had just briefed Trump on a specific issue that happened to be the President’s top talking point over the past few months?  This was a little parting gift from Barr, enabling Trump to say, essentially: “Hey, DOJ is still investigating, there still could be voter fraud out there.”  So much for Barr’s recent principled stand.

Then the letter starts to get downright mushy.  Barr gushes about “the many successes and unprecedented achievements you have delivered for the American people.” (You, personally, Donald Trump, have delivered these successes, all on your own.)  Barr declares, “Your record is all the more historic because you accomplished it in the face of relentless, implacable resistance.”  Not only was Dear Leader’s record historic — but it was “all the more historic.”  That’s historic, and then some!  It’s fine for an attorney general to publicly support a president.  But this is just over the top.  Spare us, and spare the Justice Department the indignity.

The letter quickly turns from mawkish to hawkish, as Barr turns his fire on Trump’s purported political tormentors.  Barr claims that Trump survived a “partisan onslaught against you in which no tactic, no matter how abusive or deceitful, was out of bounds.”  Barr intones that “[t]he nadir of this campaign was the effort to cripple, if not oust, your Administration with frenzied and baseless accusations of collusion with Russia.”  Barr then genuflects, “[f]ew could have weathered these attacks, much less forged ahead with a positive program for the country.”

Here’s where Barr crosses a line.  It’s one thing for an attorney general to praise the president, even grossly; it’s quite another to overtly attack his perceived political opponents.  In so doing, Barr reminded us that he perceives the world largely in us-versus-them terms.  It’s not about doing right — it’s about vanquishing the enemy.

Barr simultaneously reprises his original sin: his dishonest public manipulation of the Mueller investigation.  Barr (once again) falsely claims that Mueller’s investigation was “baseless” — contrary to the findings of Mueller himself, the DOJ Inspector General, and the Republican-led Senate Intelligence Committee that the investigation was both necessary and appropriate given the extensive evidence of Russian efforts to interfere in the 2016 election.  And Barr echoes his own prior claims that there had been false “accusations of collusion with Russia” when, in fact, Mueller concluded that the evidence established dozens of efforts by Trump campaign members to coordinate with Russia, even if those efforts did not quite constitute a specific federal crime.

Only towards the very end of the letter — the final sentence of the last substantive paragraph — does Barr get around to recognizing the thousands of dedicated public servants who are the heart and backbone of the Justice Department.  He praises “the men and women of law enforcement who selflessly — and too often thanklessly — risk their lives to keep our communities safe.”  It’s good and necessary that Barr did this.  But it’s also a no-brainer that you lead with this theme, and that gratitude towards these dedicated public servants should be the through-line of the entire farewell.  Instead, Barr tucks it away at the very end, after all the Trump-worshipping and the enemy-scalding.

Barr closes with this: “Wishing you, Melania, and your family a Merry Christmas and a Blessed holiday season.  God Bless.”  I have no issue with this.  (Other than capitalizing the “B” in Bless.)

In a sense, Barr’s farewell letter perfectly captures exactly what made him such a disastrous attorney general.  He gratuitously throws Trump a political bone by detouring to mention the briefing about continuing election fraud investigations.  He goes over the top to lavish praise on Trump in a way that feels a bit awkward to witness.  And he heaps scorn on anyone who had the temerity to oppose or even question Trump.  It’s Barr’s entire tenure, neatly reflected on one page.  Trump first, politics over principle, dignity and independence be damned.

A week from now, Bill Barr will be gone.  But his legacy will haunt the Justice Department for much longer. 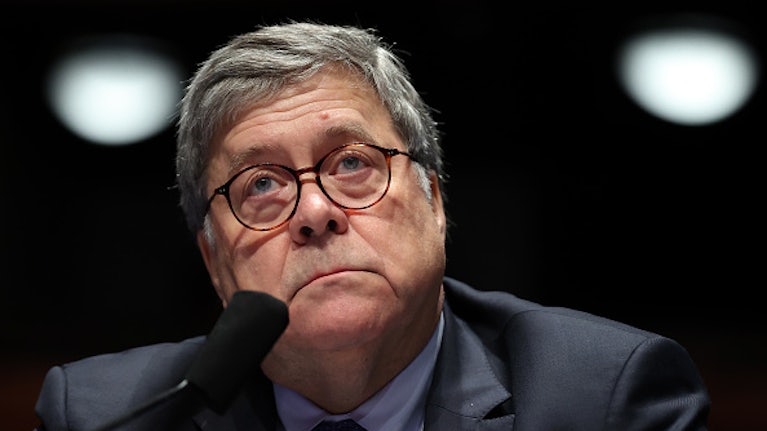