In Rob Reiner’s brilliant comedy This is Spinal Tap, there’s a scene where our hard-rock heroes have decided it’s time to kick things up to the next level.  For the concert performance of their heavy metal anthem Stonehenge (“Where the demons dwell, where the banshees live, and they do live well…”), the boys have ordered up a massive, 18-foot high replica of the iconic stone structure, which will drop down onto the stage during the song’s climax, sending the crowd into a frenzy.  Turns out, the band wrote the order wrong.  When the Stonehenge replica drops down onto stage during the concert, it’s 18 inches high, rather than 18 feet.  The spectacle that was supposed to elicit shrieks of awe from the crowd instead renders the band a laughingstock.

That scene reminds me of what we are seeing right now with the desperate efforts of President Donald Trump, Rudy Giuliani, and others to gin up their own election-eve showstopper.  Seemingly every day, some “revelation” that Trump and Giuliani expect to prompt “ooohs” and “aaahs” from the voting public instead elicits responses ranging from “Who cares?” to “I call bulls**t.”

First came the “bombshell” run by the New York Post relating to Hunter Biden.  The Post story described a handful of unauthenticated emails that, even if legitimate, are ambiguous, hardly establish anything of note, and are contradicted by actual evidence that exists outside the Post / Giuliani universe of delusion.  Here’s one indicator of just how reliable the Post story is: multiple veteran journalists reportedly refused to put their names on the story’s byline.  Another indicator: the story names two sources — Steve Bannon (currently under federal indictment for fraud) and Giuliani (reportedly under federal investigation for various offenses).

The capper is the story’s central premise: that Hunter Biden happened to leave his laptop with a Delaware computer repair shop owner who then shared the contents with Giuliani.  Sure, sounds real.  No doubt (1) Hunter Biden flew across the country from California (where he lives) to Delaware (because nobody in California has any tech knowledge), (2) left his laptop chock-full of emails and texts with a random repairman, (3) who saw the emails and recognized their significance to right-wing talking points, (4) somehow contacted Rudy, and then (5) handed over the laptop containing the allegedly blazing-hot emails, (6) just a few weeks before Election Day.  The emails might or might not be real — we have no way to know given what’s in the public record — but I’m not buying the backstory.

It’s bad enough that Giuliani is feeding this slop to the public.  But it turns out Giuliani might well be acting as a conduit for Russian disinformation, mainlining it right into the bloodstream of the President himself.  And, making matters worse, the President had been advised that Giuliani could be a source for contaminated Russian propaganda, but reportedly shrugged off the warnings with a “That’s Rudy.”  Fear not: according to Giuliani himself, the chances that his source is a Russian spy are “no better than 50/50.”  Reassuring.

It seems hard to believe now, but when I started working at the SDNY in 2004, Giuliani was a deeply respected figure.  In the 1980s, he had run the Office with aggression and bombast, adopting a fearless, kick-ass persona that seemed a bit over the top, but also felt admirable and even inspiring in its own way.  And we were just three years removed from 9/11, the memory of his performance that day fresh in our minds.  The only real question about Giuliani was when he’d become Governor, or even President.  I want to be gracious and feign some sort of sadness over what has happened to Giuliani since then, but I just can’t do it.  I’m not saddened, and I have no sympathy.  Giuliani is a vicious fraud, a sputtering con man, and an embarrassment to the SDNY.  Don’t believe me?  Ask any SDNY alum about Rudy now, and watch them instinctively cringe.

Other Trump lackeys have gotten in on the dud of an effort to manufacture an October surprise.  Attorney General William Barr has tried his darndest, appointing a U.S. Attorney to investigate the ridiculous notion that somehow President Barack Obama, Joe Biden, and others committed a crime relating to the “unmasking” of Michael Flynn.  That one flopped harder than a soccer player trying to draw a foul in the box in extra time.  We learned last week that there would be no charges on the matter, and we wouldn’t even see a report describing the futile inquest.  This came close on the heels of revelations that the ongoing Durham “investigate the investigators” drama would also yield nothing new before Election Day.

Trump himself was so dismayed by Barr’s failure to deliver the political goods that he openly questioned and threatened the job of his loyal defender and lapdog.  Trump called the Durham investigation’s failure to bring juicy indictments a “disgrace” and an “embarrassment,” exclaiming “I think it’s a terrible thing. And I’ll say it to [Barr’s] face.”  (What’s Barr gonna do, throw a punch?)  Trump even declined to commit to bringing Barr back for a second term.  “I’m not happy” with Barr, he moaned.  Trouble in paradise for these two.

Trump has taken things to a new level of desperation this week, openly calling on Barr to go after his political rivals: “We’ve got to get the attorney general to act.  He’s got to act.  And he’s got to act fast… This is major corruption and this has to be known about before the election.”  I want to be clear, because the expectations have sunk so low: we are off the rails here, folks.  The President of the United States is openly calling for his Attorney General to initiate criminal proceedings against his political rivals, and to do it before Election Day. This is a bald abuse of power, explicitly connected to an upcoming election, happening right out in the open.

Imagine if this happened under any other administration.  Imagine if George W. Bush called on John Ashcroft to investigate and potentially indict John Kerry in October 2004, or if Barack Obama called on Eric Holder to open a case against Mitt Romney in October 2012.  We’d have been talking seriously about impeachment.  But with Trump, it all fades into the background noise.  It’s just Trump being Trump.

There is good news in all of this, believe it or not.  Think back to 2016: Jim Comey’s last-minute announcement that he had reopened the Hillary Clinton e-mail investigation landed like a Mike Tyson left hook, potentially swinging the race — even though no charges ever came out of that particular drama.  But now, four years, later, we’re a bit more cynical, or skeptical, depending on the value judgment we attach to it.  We take bombshells — particularly those that just happen to drop in mid-October, owing to the timely civic instincts of a Delaware computer repair shop owner — with a raised eyebrow and a healthy sense of doubt.

Thanks to Trump, Giuliani, and others, there’s more drivel out there than ever before.  Some of it will inevitably break through, and influence at least some people.  But now, the general public seems better equipped to detect, and reject, the nonsense. 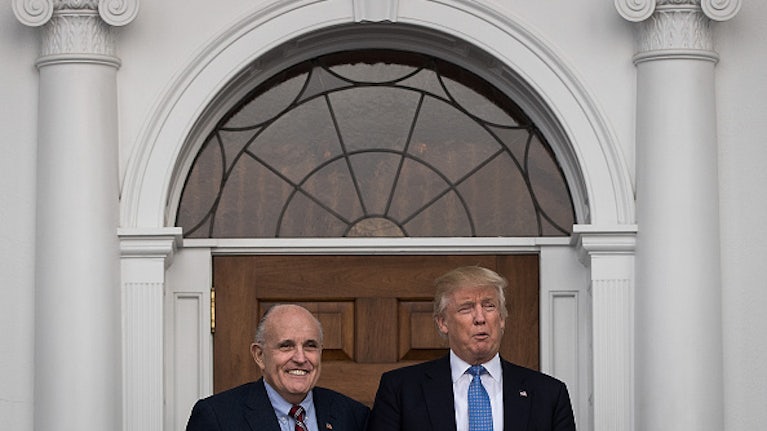