A weekly Note from Elie is part of the CAFE Brief, and Insider members can listen to a recording of the note the same day. Please enjoy Elie reading this week’s note, “Miseries of MDC are Ghislaine Maxwell’s Incentive to Flip,” and read his note in your inbox every Friday.

I’ve spent more days inside prisons than I can count.  And, every time I left one — after spending a few hours meeting with an incarcerated witness — I’d take a deep breath and say a silent prayer of thanks that I had the freedom to walk out.  Even for mere temporary visitors like me, prison is soul-crushing.  I can’t even imagine living inside one.

While it’s impossible to rank them — we’re just talking degrees of hell here — two of the most oppressive prisons are the Metropolitan Correctional Center (MCC) in Manhattan and the Metropolitan Detention Center (MDC) in Brooklyn, the New York City facilities that house federal inmates.  Many prisons are set in sprawling, isolated rural settings; the federal prisons in Otisville, New York and Fairton, New Jersey, for example, are set (a bit jarringly) amidst almost picturesque, rolling rural landscapes.  But the MCC and MDC are crammed right in the heart of New York City, and are more crowded, more cramped, and more claustrophobic than most other prisons.

Whenever I’d go into one of the small rooms at the MCC where a prosecutor can meet privately with a potential witness, we’d turn on an ancient, deafening metallic fan to move the air a bit.  But when the noise got to be too much to bear, we’d turn it off — silencing the hellish racket but turning the room into a sauna.  And that was one of the more finely-appointed attorney visiting rooms.  All the other miseries you’d imagine — rats, mold, sewage seeping down from the ceilings — they’re all part of the mix too.

The MCC and the MDC are bad enough to break a person.  I’ve seen it.  I once went to visit a potential witness inside the MCC — a tough guy, on the surface, with a scary rap sheet and a distinct “Who gives a f***” attitude — and he practically collapsed in tears when he saw me.  I’ll always remember what he said:  “I don’t know what time it is, I don’t know what day it is, you’ve gotta get me out of here.”  This was a guy who used to make his victims plead for mercy.

It can be enough to make even a hardened criminal flip.  Michael DiLeonardo, the infamous Gambino Family Captain, testified several times that he decided to do the unthinkable and cooperate with the government in part because he could not withstand the conditions at the MCC.  John A. Gotti stated that a particular high-security section of the MCC “almost broke me.”  The MDC is just as bad and arguably worse, depending on the respective housing units in the dark comparison.

Ghislaine Maxwell now knows that she will spend the foreseeable future in the MDC.  A federal judge — the same one who will preside over Maxwell’s case — denied her application for bail, finding that she posed an unacceptable risk of flight.  Seems right, given that Maxwell holds three passports, has access to at least 15 bank accounts, has extensive international connections, lived a lavish lifestyle despite never holding an identifiable job, used cash to purchase a remote 156-acre spread in New Hampshire, and ordered packages for delivery using a different name.  And when FBI agents arrived at the property to arrest Maxwell, they discovered Maxwell’s cellphone, which was wrapped in tin foil, “a seemingly misguided effort to evade detection” by law enforcement.  (In fairness to Maxwell: what other kitchen product is a person supposed to use to wrap a cellphone?)

The outlook for Maxwell is grim.  She is 58 years old.  She has never spent a day in prison before her arrest, and she might never spend one outside if she gets convicted.  Her trial, scheduled for July 2021, is still a year away.  If convicted — and the vast majority of federal trials result in guilty verdicts — she faces up to 35 years behind bars.  A statutory max sentence seems unlikely, but I can certainly foresee a sentence of double-digit years given the severity of the charges.

And the evidence against her looks particularly strong.  In its original memo seeking to deny Maxwell bail, the SDNY represented to the court that “[m]ultiple victims have provided detailed, credible, and corroborated information against the defendant.  The victims are backed up [by] contemporaneous documents, records, witness testimony, and other evidence.”  In a later filing, prosecutors added that they had located additional witnesses who came forward after Maxwell’s arrest.  This is how prosecutors tell a judge, essentially: we’ve got the goods.

Maxwell now will await trial from the misery of the MDC.  And unlike many of the mobsters and drug traffickers who I prosecuted, Maxwell is in no way accustomed to life behind bars.  To the contrary, Maxwell is a central-casting socialite — luxury homes, private jets, designer everything, celebrity hobnobbing, vast unexplained wealth.  She is in for some serious culture shock.

But it is absolutely inevitable that people who are locked up pending trial for legitimate reasons will also become more heavily incentivized to flip.  It’s human nature.  The psychology is completely reversed, depending on the scenario.  Imagine being home on bail awaiting trial.  It’s stressful, no doubt, but prison remains mostly a vague, looming possibility, and you’re likely to do anything to avoid going in.  But imagine being stuck inside waiting for trial — prison a daily reality, no release date in sight.  The imperative to cooperate and expedite your own release becomes tangible, and urgent.

So will Maxwell try to flip?  (And will the SDNY want her as a cooperator?  I’ve argued in this space that they should).  If she does cooperate, the stakes could be enormous.  Many boldface names have been linked socially to Epstein or directly implicated in other court proceedings.  And the SDNY is staffing the case out of its Public Corruption Unit — an unusual move that signals some public official is involved in the case in some manner.

The pressure on Maxwell is now ratcheted up, in the most visceral way.  Prison has a way of smacking cold reality into a person.  I could barely hack it even for the few hours I’d spend inside as a visiting attorney.

Will Maxwell be willing to stay silent and bear it in prison, up until her trial a year from now (or guilty plea) — and, given the apparent strength of the evidence against her, likely far beyond?  Or will the added pressure of life behind bars deliver Maxwell — and, with her, potentially many others — right into the prosecution’s hands? 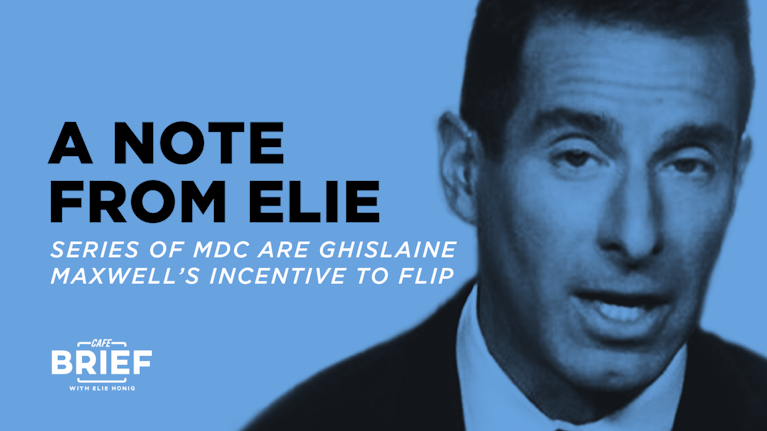 Note From Elie: Miseries of MDC are Ghislaine Maxwell’s Incentive to Flip