Whether you voted for Joe Biden (in which case you are likely feeling optimistic but guarded) or President Donald Trump (you’re probably glum but holding out hope for one more electoral miracle), there will be good news worth celebrating in the wake of the 2020 election.

No, neither side stands to get its dream-world scenario.  Democrats appear likely to take the biggest prize, of course, and to emerge as the winners on balance.  But if Biden does win it, he will not sweep into the White House with an overwhelming popular mandate or with a firm nationwide repudiation of Trump, and Trumpism.  More importantly, Republicans likely (but not certainly) will retain control of the Senate, despite Democratic hopes of flipping it to blue and taking control of the White House and both houses of Congress at once.  If they do hold onto the Senate, Republicans will be able to block Democratic legislative initiatives and, at a minimum, bargain for major concessions.  All eyes will shift to Georgia, where two run-off elections could determine control of the Senate, with enormous consequences for the country’s legislative policy agenda.  And Senate Majority Leader Mitch McConnell will stand between Democrats and the federal courts; just how far will he go to stall and block Biden’s judicial and other nominees?  (Here’s an early guess: very far.  I’m talking “can he really do that?” far).

Beyond the winners-and-losers calculus attendant to any national election, everyone should celebrate (or take solace in) this outcome: we, collectively, avoided the worst-case scenarios.

Despite Trump’s dangerous rhetoric in the months leading up to and during the election — his false proclamations about massive voter fraud, his admonition to right-wing extremists to “stand back and stand by,” his praise for recent efforts to intimidate opposing campaign workers — we did not see violence at polling places.  There were no squadrons of armed militia members standing by to intimidate voters.  We did not see destructive protests erupt in the streets.  We went to the polls and we voted by mail, in record numbers, and calm prevailed.

We did not see pervasive foreign interference in the election.  Yes, Rudy Giuliani and others tried to inject dirt of dubious origin into the campaign, but those efforts were duds.  If anything, they further cemented the public perception of Giuliani as an unhinged, compromised huckster.  The Department of Homeland Security and other authorities recently confirmed that they have seen no evidence of systemic foreign interference in the 2020 election.  One caveat here: we might not learn about foreign interference, or the extent of any such interference, until well into the future.  But thus far we’ve seen nothing to rival the coordinated Russian effort to hack and dump emails during the 2016 campaign.

We avoided a Veep-like Constitutional quagmire.  We did not have to resort to the 12th Amendment and have the election decided by the House of Representatives (and not even by the full House membership, but rather by a bizarre one-vote-per-state process which likely would have yielded a Republican winner, even though the Republicans comprise a minority of House members).  Nor did we see the nightmare scenario of state legislatures appointing slates of electors contrary to the actual vote count, despite reported consideration of such tactics by the Trump campaign.

One potential scenario that many had feared did come to pass — Trump declared victory prematurely, with vote counting ongoing — and we all mostly ignored it, regardless of party affiliation.  After 2:00 a.m. on November 4, Trump proclaimed “Frankly, we did win this election.”  He also vowed “we’ll be going to the US Supreme Court” because “we want all voting to stop.”  (Note: nobody can simply “go to” the U.S. Supreme Court — you need things like standing, a justiciable claim, a lower-court ruling, a legal cause of action, and actual evidence).  Trump later tried, hysterically, to “hereby claim[]” various states for himself.  Prior losing presidential candidates must be kicking themselves for not thinking up this brilliant ploy — all they needed to do was “hereby claim” a handful of pivotal states and, voila, electoral college victory!

The presidential election likely will not be decided in the courts.  The Trump campaign has now filed lawsuits in Pennsylvania, Michigan, and Georgia.  But the legal claims mostly are an incoherent mess of spurious allegations backed by zero evidence; even if successful, the claims probably will not impact enough votes to bridge anything but the tiniest electoral gap.  Only the Pennsylvania lawsuit stands any chance of success, and that will matter only if the entire election turns on Pennsylvania and the vote count in Pennsylvania is very, very close for Biden.  We seemingly will avoid another Bush v. Gore scenario, or even a potential mega-multi-state repeat of 2000.

We’ve collectively achieved all of this despite the unprecedented practical, logistical, and legal obstacles presented by the Covid pandemic.  We might even have adapted to the new reality in a way that will facilitate future voter engagement and participation.  For example, many people voted by mail for the first time, and state laws and policies evolved to accommodate those voters — by expanding access to mail-in ballots, by extending deadlines, and by permitting sensible new methodologies such as drive-thru voting.  We saw record-breaking early voting numbers, and we seem likely to smash all prior records for total voter turnout.

But, for all of the institutional successes, the 2020 election also has underscored structural flaws in our electoral process.

If Trump gets a late run of good fortune and pulls it off, the electoral college will give us our third election in the past six where the winning candidate received fewer popular votes (the others were Trump in 2016 and George W. Bush in 2000).  As unpopular as the electoral college is in some quarters, there remains next to no chance we will be able to change it by Constitutional amendment, which requires two-thirds votes of both the Senate and House and ratification by three-fourths of all states.  The less-populated states hold outsized power under the electoral college, and almost certainly would not be on board with scrapping it.  We are stuck with the electoral college, likely for a long time, for better or worse.

The 2020 election also reminded us that we do not have one unified, national election system.  Rather, we have 51 separate systems, one for each state plus Washington DC.  As a result, our elections are (literally) all over the map.  Some states permit mail-in voting for any reason, while others require specific cause.  Some but not all states allow early, in-person voting.  Some states count ballots that arrive after Election Day, while others don’t.  This lack of uniformity is a result of Constitutional design; Article II specifically gives the states the power to administer their own presidential elections, and there are benefits to this kind of balkanized system.  But the end result is a messy Frankenstein monster of an election system (or, election “systems”), with seemingly arbitrary state-to-state variances that tend to undermine public understanding and acceptance of our process.

Despite the imposing challenges we face this year — Covid, an incumbent president unrestrained by established norms — our political, legal, and electoral systems have survived, and even thrived.  Our Constitutional system is, no doubt, imperfect.  But the 2020 election has reminded us that it also is fundamentally good, and remarkably resilient. 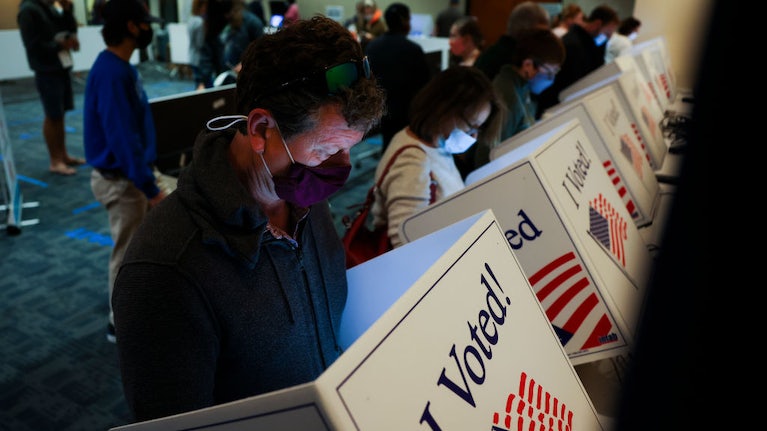 Note From Elie: Our Imperfect Yet Resilient Constitutional System