I understand the temptation. I really do. The candidates vying to replace Cyrus Vance, Jr. as Manhattan District Attorney now have ample political incentive to whip voters into a frenzy by promising, if elected, to rain down holy hell on the head of former President Donald Trump, his whole family, and anyone who has ever worked for the Trump Organization. But the candidates ought to resist the urge. While a Trump-centric campaign pitch might pay short-term dividends in the Democratic primary polls, it’s the wrong thing for the candidates to do, and it might ultimately backfire.

It has long been widely expected that Vance, who has served as the Manhattan DA since 2010, would not seek re-election in 2021. Now that’s official, and at least eight serious candidates are vying to replace him. Given Manhattan’s demographic and partisan composition, whoever wins the Democratic primary in June will, to a virtual mathematical certainty, also win the general election in November and succeed Vance in January 2021. (Manhattan has not had a Republican DA since the 1940s.)

So the electorate will be, effectively, Democrats who live in the Borough of Manhattan — a group that is not exactly sympathetic to their schmaltzy former neighbor who resided in a gilded tower at Fifth Avenue between 56th and 57th. And whoever wins the impending election for Manhattan DA might inherit a pending criminal indictment against Trump, or perhaps the decision whether to charge such a case in the first place. (Disclaimer: one of the candidates, Alvin Bragg, is a friend and former SDNY colleague of mine; I have publicly supported and donated to his campaign.)

The temptation for these candidates to rally electoral support by vowing to take vengeance on Trump is real, and understandable. It’s the reddest of red-meat pitches to Manhattan Democrats: Vote for me and I’ll nail the Trumps. What anti-Trump voter could resist, and what bottom-line oriented political candidate wouldn’t want to whip up support with this kind of promise?

But the candidates to replace Vance would be well-served to take the high road, or at least a middle path.

First, it’s simply irresponsible to promise to charge a particular case without knowing all the facts, or even most of them. We in the public know the general outlines of a potential case against Trump, or his family members at the Trump Organization — essentially, they committed financial fraud by intentionally inflating or deflating the value of their assets. But nobody in the public knows for sure right now: (1) whether there was in fact a criminally chargeable fraud, and (2) if so, which specific individuals knew of and authorized any such fraud.

It appears the Manhattan DA’s office itself is still sorting this out. The DA recently retained an outside expert forensic accounting firm and a former federal prosecutor to assess the case, with its millions of documents (including Trump’s tax returns) and likely dozens of witnesses. Until any candidate wins the election, takes office, and reviews all the facts, he or she simply has no basis to promise a charge or successful prosecution of Trump.

Second, public boasts by the candidates about how they’ll annihilate Trump could well backfire. Criminal defendants can raise a defense known as “selective prosecution”: essentially, I was singled out for prosecution for political reasons. This defense almost never succeeds. But, then again, defendants who raise the selective prosecution defense rarely can point to specific statements made by candidates who have vowed to prosecute them if elected. Why give Trump any ammunition at all to raise this defense and potentially to defeat a prosecution?

Many candidates have criticized Vance for declining to bring fraud charges against Ivanka Trump and Donald Trump Jr. in 2011, when it appeared that a prosecution would have been justified. Those backwards-looking criticisms are fair game (as are criticisms of Vance for going light on other wealthy, powerful people including Harvey Weinstein and Jeffrey Epstein). But promising to bring a charge, prospectively, against any particular person in an ongoing investigation is another thing entirely.

Some of the candidates have already come dangerously close to the line, or arguably have crossed it. One candidate, Diana Florence, tweeted, “Who can hold President Trump accountable? Your next #ManhattanDA.” Another candidate, Eliza Orlins, tweeted at Ivanka Trump, “You won’t get off so easy when I’m Manhattan D.A.” When an NYU Law professor on ethics called Orlins out for this boast, Orlins said she did not regret the tweet but would evaluate all of the evidence fairly. Dan Quart, another candidate, seems to have his mind made up, tweeting that, “Trump evaded taxes under the @ManhattanDA ’s nose for a decade.” Another candidate, Tahanie Aboushi, tweeted that Vance “could have stopped a Trump presidency. Next.”

Some of the candidates have handled questions about Trump exactly right, by confirming that they will base any decision solely on an impartial review of all the facts and the law; even the candidates mentioned above have said essentially this, at times. But those momentary slips into overheated rhetoric do real damage to public faith in the office’s impartiality. And those statements arguably violate New York state ethics rules that prohibit “extrajudicial statement[s] that a reasonable person would expect to be disseminated by means of public communication if the lawyer knows or reasonably should know that it will have a substantial likelihood of materially prejudicing an adjudicative proceeding in that matter.” Now, with Vance officially on his way out and the Trump investigation seemingly gaining public focus, the temptation to toe the ethical line will only become more pronounced.

If you’re okay with pre-electoral posturing aimed at Trump or his family, ask yourself this. What if, in the next race for the position of Attorney General of Delaware, a candidate made his case for election by promising to go after the Bidens. Vote for me for Attorney General and I’ll nail Hunter Biden, for example. Would you be okay with that?  You shouldn’t be. This isn’t “whataboutism.” This is a principle of prosecutorial integrity and fairness, equally applicable across party lines. You don’t campaign to become a powerful prosecutor by singling out one person or one family.

The Manhattan DA is one of the most powerful prosecutors in the country. And that position will come with even more responsibility than usual now, with the former President’s future potentially at stake. The candidates to replace Vance need to resist the temptation to appeal to their electorate’s thirst for prosecution of Trump, or any particular person. Perhaps the evidence ultimately will support prosecution, or maybe it won’t. The candidates can best demonstrate their fitness for office by re-affirming their commitment not to any predetermined outcome, but to the criminal justice process itself. 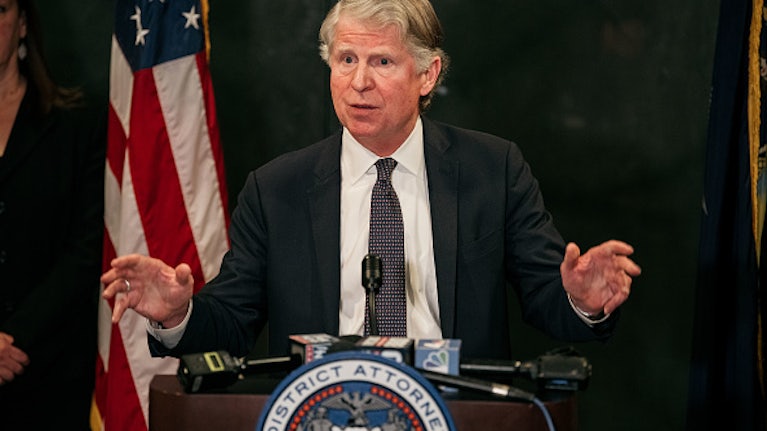 Note From Elie: Promising a Trump Prosecution Could Backfire