Up until last year, I managed to go two decades as a lawyer without ever thinking about, or even really knowing about, the Electoral Count Act of 1887.

The law’s obscurity was a testament to the strength of our democracy. We were on auto-pilot; every four years, states sent their electoral votes in to Congress, the votes were counted up at some rote ceremony, and then the person we had elected in November took the oath of office in January. Peaceful transfer of power, done and done.

Those were simpler times, of course. Now we’ve been through Donald Trump and the 2020 election and his dogged lies about election fraud and a coup attempt that culminated in January 6. But let’s remember that the effort by Trump and his sycophants to steal the election turned largely on manipulation of this deeply flawed law, the Electoral Count Act. And that coup attempt came closer to succeeding than it ever should have, in large part because the Act is equal parts confusing and nuts.

So let’s walk through the Act. It’s not easy because the thing is a mess, so I’ll stay out of the most tangled weeds. First, January 6 is now January 6 because this law specifies in the very first sentence that “Congress shall be in session on the sixth day of January succeeding every meeting of the electors.” The Act also specifies that the ceremony starts at 1:00 p.m. Not coincidentally, Trump began his infamous speech at the “Stop the Steal” rally on the Ellipse precisely one hour earlier, at noon.

The law then goes through a drawn-out description of how the votes should be passed around the chamber and counted – tellers and handling of votes and opening of envelopes and alphabetical lists and the like. To this point, it’s all clerical, and even a bit quaint.

But eventually, the law goes off the rails, in two key respects. First, it provides that electoral votes “shall be counted” by the President of the Senate (the vice president, in practice). In fairness, we can’t blame the Act itself here. It’s plain on the law’s face (and in logic, and reason) that the vice president plays a purely ceremonial role and has no authority simply to reject votes she doesn’t like. Were it otherwise, any VP over the past 130-plus years since the Act’s passage – Kamala Harris, Dan Quayle, Hubert Humphrey, Garret Hobart (cash your bet if you had Hobart on your bingo card this week) – could simply toss out votes for the other party. No reasonable person could argue that the law permits this.

Of course, Trump and his legal henchman John Eastman don’t quite qualify on this score. Eastman infamously pushed his election-stealing “legal” strategy premised on the absurd claim that, as vice president, Mike Pence could have simply discarded votes at his own will. Thankfully, even Pence saw through this one and politely declined to participate in that bit of sedition.

And then the law gets really bizarre. Cutting through the Act’s impenetrable verbiage – trust me, you don’t want to read it through, it’s brutal – the law provides that any state’s electoral votes can be challenged based on objections by one Senator and one Representative. That’s right: two members of Congress, out of 535, can get together and cause chaos. For every such objection, the two houses of Congress then must break into separate debate sessions. This was part of the Trump-Eastman plan, to delay certification by repeatedly challenging state results, throwing Congress into a prolonged cycle of objection, delay, and confusion (exacerbated, it turned out, by a deadly riot).

And here’s the even stranger part. The Act provides that, if both the Senate and House agree by majority votes, they can decline to count any such contested electoral votes. Taken to its extreme, then, if one party controls both houses of Congress, it technically can reject some or all electoral votes for the other party. That is, to put a fine point on it, undemocratic madness.

So here we have this potentially disastrous mess of a law. Let’s fix it, right? Right?? Clarify that the vice president’s role is purely ministerial. And make it more difficult or even impossible for the majority party in Congress to unilaterally reject votes and anoint its own candidate as the winner. It’s an eminently simple solution to a serious problem. It’s like going indoors during a lightning storm to avoid getting struck.

Or maybe not. Here’s where the politics kick in. Some Republicans recognize that the Act is a problem, and that passage of a reform bill might deflect concern from restrictive voting laws being passed in states around the country. Senate Minority Leader Mitch McConnell recently acknowledged, “It obviously has some flaws, and it is, I think, worth discussing.” Democrats, of course, understand firsthand the potential danger of the Act as it now exists, given Trump’s attempted exploitation of it at their expense. But powerful Democrats worry that passage of a reformed Electoral Count Act will undermine broader efforts to pass federal voting rights legislation. Senate Majority Leader Chuck Schumer fretted last week that to pass Electoral Count Act reform but not broader voting rights legislation fails to “deal with the problem” (of restrictive state voting rights laws) and would be “unacceptably insufficient and even offensive.”

There’s the dilemma. Schumer and his fellow Democrats may have to decide between “something but not nearly everything” and “nothing at all.” Of course, that overlooks the fact that Democrats control majorities in both the Senate and House and, with enough political will to revise the filibuster, could get everything they claim to want, the full voting rights package. They just don’t seem to have enough internal support to go that far. So Democrats have limited their own options and now seem to favor doing nothing at all in an act of futile protest.

Schumer’s gambit reminds me of a scene in Good Will Hunting. Matt Damon’s troubled character is talking with his therapist, played by Robin Williams. Damon’s character recounts how his father would give him the option of being beaten with a belt, a stick, or a wrench. Williams says, “Well I gotta go with the belt there, Vanna.” And Damon responds, “I used to go with the wrench… cause f**k him, that’s why.” Schumer, like the Damon character, will make his point, even if it means knowingly visiting the worst-case scenario on himself. Cause f**k them, that’s why.

If it’s not reformed, the Electoral Count Act will remain a blight on our democracy. The solution is simple, and should be uncontroversial, but politics may get in the way. If the Act remains in place, as is, then maybe it’ll recede back into obscurity, for a bit. But if and when it does come back up – maybe many years from now, or maybe in 2024 – then we’ll all regret the missed opportunity of this moment. 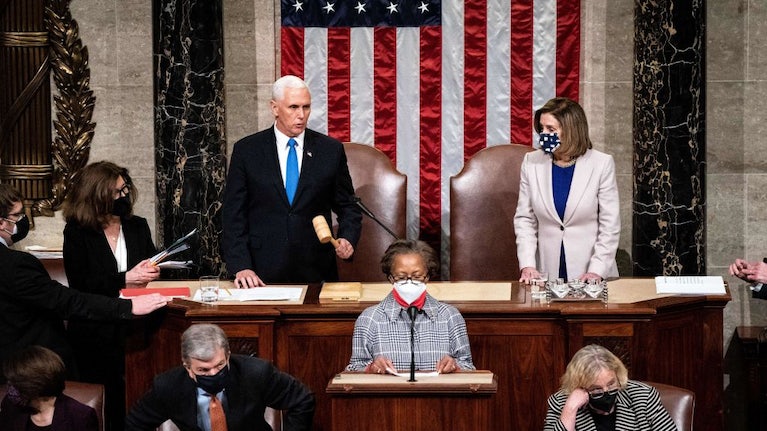