Today we’re going to talk about a time when Justice Clarence Thomas did the right thing.

The case before the Supreme Court was United States v. Virginia. At issue was the male-only admissions policy at the Virginia Military Institute, where Thomas’s son was then a student. So Thomas made the ethically proper move: he recused himself from the case. Even if he was unlikely to slant his ruling one way or the other because of his familial connection to one of the parties, he seemingly understood that it simply wouldn’t look right if he ruled on a case involving his son’s school. The Court struck down the VMI admissions policy by a 7-1 vote, with Thomas sitting it out.

One important detail: this case happened in 1996.

In the quarter-century or so since then, Thomas seemingly has forgotten basic principles of judicial impartiality and independence. Or maybe he hasn’t forgotten; maybe he just doesn’t care anymore. Life tenure can breed a certain complacency, or arrogance.

The problem here is that Thomas’s wife, Ginni, has connections to various cases before the Court – yet Thomas has steadfastly refused to recuse. (Not a bad title for his next memoir, come to think of it: Refuse to Recuse.)

We’ve long known that Ginni holds extreme (or, extremist) political views. As Jane Mayer detailed in a masterful piece for the New Yorker, Ginni – who runs a for-profit political lobbying firm that has worked with and for various right-wing groups – has been vocal about her political beliefs. Mayer reports that Ginni “has declared that America is in existential danger because of the ‘deep state’ and the ‘fascist left,’ which includes ‘transsexual fascists.’”

As bizarre and abhorrent as those views are, Ginni has the right to hold and express them. The problem, however, is that she has done quite a bit more than that. It turns out Ginni attended and cheered the January 6 “Stop the Steal” rally near the White House, right before the Capitol insurrection. She posted on social media during the rally, “LOVE MAGA PEOPLE” and “GOD BLESS EACH OF YOU STANDING OR PRAYING.” (She later deleted those posts, but screenshots are forever.) Ginni claims she left before violence broke out, though she did reportedly act as a “mediator” between various pro-Trump factions planning to attend the rally, aiming to unite them around a common cause.

And now we’ve now learned that Ginni was texting with former White House Chief of Staff Mark Meadows before, during, and after the effort to steal the election that culminated on January 6, imploring him to take action. “Help This Great President stand firm, Mark!!! … You are the leader, with him, who is standing for America’s constitutional governance at the precipice. The majority knows Biden and the Left is attempting the greatest Heist of our History,” she wrote in one text. In another, she implored, “Sounds like Sidney [Powell] and her team are getting inundated with evidence of fraud. Make a plan. Release the Kraken and save us from the left taking America down.”

Even if we assume for the moment that Ginni did nothing criminally or legally wrong (I’m feeling generous), she is, at a minimum, a potential witness in January 6-related cases. Investigators, or litigants, would need to understand what role she played in facilitating the rally: how the rally came together, who she spoke with, what their plans were. And they’d certainly have questions about her dealings with Meadows, and other power players.

Yet Thomas has thus far declined to recuse himself on January 6-related matters. Notably, when the Court considered the House January 6 Select Committee’s subpoena to the National Archives for documents relating to the Trump White House, Thomas stayed on the case. The Court ruled in favor of the Committee by an eight to one vote. The one dissenter? You guessed it: Justice Clarence Thomas. Not the best look.

Federal judges generally are bound by a formal code of conduct that governs recusals, among other ethical issues. The basic principle is that, if a judge has any potential personal interest in a case, it’s better to err on the side of caution and back out. All federal judges must abide by these rules – except the justices of the Supreme Court. Part of this is practical; when a district court or appellate judge recuses, another judge can take over in her place, but when a Supreme Court justice bows out, the Court must operate one short. But it also feels a bit like a power play: “We’re the Supreme Court and we’re special and who’s gonna make us do any different?”

There’s no way for any outsider to compel a justice to recuse. We leave that decision to the common sense and good judgment of the justices themselves. And that’s where things went wrong with Thomas. Justices commonly recuse themselves from cases where they have some familial, professional, or political relationship. Justices Breyer, Sotomayor, Kagan, Gorsuch, and Kavanaugh have recused themselves recently. Thomas himself did so back in 1996, in the VMI case, and a few dozen other times besides that. Yet when it comes to his wife’s involvement in January 6, he somehow sees no issue.

Ginni, for her part, went on the defensive. “Like so many married couples, we share many of the same ideals, principles, and aspirations for America,” she said publicly. “But we have our own separate careers, and our own ideas and opinions too. Clarence doesn’t discuss his work with me, and I don’t involve him in my work.”

This response misses the point. It’s not about whether the Thomases are strategizing and colluding over the kitchen table. The problem is that, at an absolute minimum, the whole thing looks terrible. Appearances matter when it comes to our courts. Could a reasonable person look at a ruling – say, for example, Justice Thomas’s lone dissenting vote on the National Archives case– and raise an eyebrow? If so, then that’s an institutional problem for the Court, calling into question its credibility and impartiality.

By keeping himself on cases touching on his wife’s activities, Thomas has further eroded the public’s already-frayed trust in the Court’s political independence. A recent Gallup poll found that only 40% of the American public approves of the Supreme Court’s recent performance, an all-time recorded low.

The Justices have tried to fix this problem by simply telling us that we’re wrong. Thomas, for his part, blamed the media: “I think the media makes it sound as though you are just always going right to your personal preference… They think you become like a politician.” We’ve recently heard variations on this claim from Justices Breyer, Samuel Alito, and Amy Coney Barrett, who proclaimed defensively that “the court is not comprised of a bunch of partisan hacks.” We’re not political, the standard argument seems to go, because we’re telling you that we’re not political.

I disagree with the justices’ claims of political independence, and most Americans now see it the same way. And when it comes to our courts – especially the Supreme Court – appearances matter. As a basic rule, if it looks bad, it is bad.

Recusal offers an easy path here for Thomas to do the right thing. But he refuses to take it. 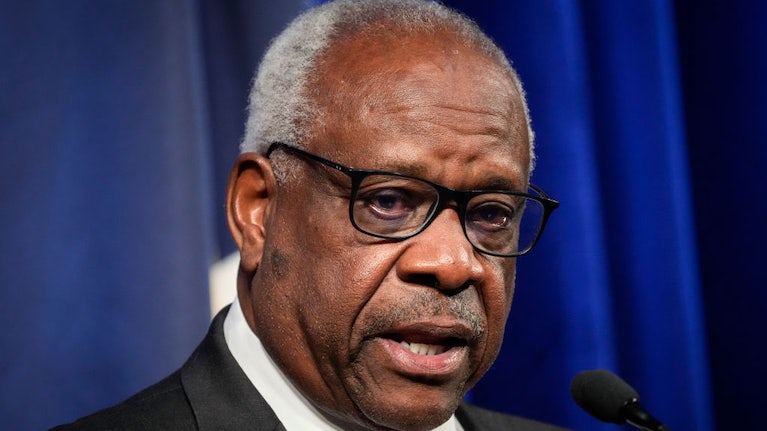