I was about two hours into my closing argument when it hit me: I was losing the jury.

This was my first mafia trial.  We had spent the prior two months trying four Genovese Family members on an unspectacular set of charges — no murders, no serious violence, mostly extortion, loansharking, and gambling charges, with one mild beating (as these things go) and a bit of tough-guy posturing thrown in. Not much for a mob trial.

Making matters worse, we had made a tactical mistake — as I realized while standing in front of the jury, a tad too late. Lacking much compelling evidence, we threw up everything we had and hoped the sheer mass, the accumulation, would do the trick. We played 90 different audio recordings for the jury, many of them hard to hear or touching only on tangential issues. We had an FBI agent testify about dozens of times when he photographed the defendants standing around with other mob guys outside restaurants and social clubs, looking mob-ish. A shaky cooperating witness testified for over a week. In my ill-fated closing, I basically laid it all out there, in painstaking detail. It was too long, too deep in the weeds.

The jury’s verdict was, as I expected, a disaster.  The jury hung on the lead defendant, a Genovese Family captain (meaning they could not come to a unanimous verdict either way, though we later learned they were split 10-2 in favor of acquittal). They hung on one other defendant (we would later dismiss charges against him) and acquitted two others outright.

A few months later, we re-tried the lead defendant, alone. This time, we decided to throw out the fluff and give the jury only the best evidence. Instead of 90 tapes, we played the best ten or so. We ditched all but the best surveillance photographs. We dropped the cooperating witness altogether. Instead of a two-month trial, we did it in two weeks.  My closing argument took 45 minutes, and the jury quickly convicted the defendant on all counts.

Indeed, there are two prevailing schools of thought at the SDNY about how to try a case.  The “kitchen sink” approach involves throwing everything you have at a jury and hoping the sum of it is compelling enough to win a conviction. But the “thin to win” approach holds that you focus on the absolute strongest facts, throw out the marginal stuff, get it in and get it done. Needless to say, I permanently converted to the “thin to win” camp after this trial experience.

As the U.S. Senate prepares to hold an impeachment trial of former President Donald Trump, I humbly offer my own SDNY trial experience as a lesson in failure and success alike. Get it done, quickly.

A Senate impeachment trial is, of course, not a criminal trial. The black-letter law that strictly guides a criminal case — the rules of procedure, the rules of evidence, the prosecutor’s burden of proof beyond a reasonable doubt — do not apply. As we learned from Trump’s first impeachment, the Senate can even vote without hearing any evidence at all, beyond what is already in the public realm.

Nonetheless, the House impeachment managers — all of whom are lawyers, and some of whom are former prosecutors — must make the same fundamental decision that prosecutors face in every trial: how do we explain this case to the jury in the most compelling manner possible?

If the House impeachment managers so choose, they can turn this into a prolonged showpiece.  Historically, Senate impeachment trials are drawn-out affairs: Andrew Johnson’s lasted 83 days (heaven help us), Bill Clinton’s went 37 days, and Trump’s 2020 impeachment ran 21 days (we now have to differentiate between Trump’s multiple impeachments). This time, for Trump Part II, House impeachment managers can call dozens of witnesses, play hours upon hours of video footage, and make winding speeches about the meaning of the Capitol insurrection. They can drag this out for essentially as long as they wish.

But that would be a mistake. If this trial goes anywhere near as long as any of the three prior presidential Senate impeachment trials, the House impeachment managers risk losing their audience. Technically, the jurors here will be the Senators themselves, who ultimately cast thumbs-up, thumbs-down votes. But realistically, the jury here is the American public, to whom all politicians are acutely responsive.

House managers can and should present their case in a week. It writes itself. Start by establishing that the claim that fueled the insurrection — that the 2020 election was stolen from Trump — was a lie, eagerly exploited and amplified by Trump and his enablers. You don’t need to call expert witnesses here, or various secretaries of state. Simply introduce the public statements from the FBI, the Attorney General, and the Department of Homeland Security that there was no widespread fraud.  Mark as exhibits the dozens of rulings from state and federal courts across the country rejecting Team Trump’s fictitious claims of election fraud. Point established.

Next move on to the gathering of the rioters. Here, Trump’s own words suffice. From his original exhortation of the Proud Boys to “stand back and stand by” to his tweets calling his followers to Washington DC on January 6 (the date on which the election would be certified). Throw a highlight on Trump’s promise that the gathering “Will be Wild!”

Then play the clips of the rally itself.  We’ve seen them countless times by now: “Trial by combat!” (sputtering conman Rudy Giuliani) and “Today is the day that American patriots start taking down names and kicking ass!” (dangerously unhinged Representative Mo Brooks). And of course, the capper, from Trump himself: “We’re going to walk down to the Capitol, and we’re going to cheer on our brave senators and congressmen and women, and we’re probably not going to be cheering so much for some of them” and “We fight like hell. And if you don’t fight like hell, you’re not going to have a country anymore.”

Finally, remind the Senate and the American public what happened on January 6 inside the Capitol. The destruction, the bloodshed, the Confederate flags and Nazi gear, the chants to hang the Vice President, the theft and destruction of everything from artwork to Nancy Pelosi’s laptop. And don’t forget the statements by several rioters that they ransacked the Capitol because they understood that Trump wanted them to do just that.

Round it out with Trump’s own statements in the immediate aftermath of the Capitol riot (back when he was allowed to tweet): “[t]hese are the things that happen,” “great patriots,” “[r]emember this day forever!” That’s it. Shouldn’t take more than a week.

Trial is now set to start, in earnest, the week of February 8. It will take discipline by the House impeachment managers to keep their case lean and mean. There’s always a temptation — which I imagine will be exacerbated by the presence of national television cameras — to pile everything on, to showboat, to bask in the spotlight. But if the impeachment managers go down that road, they’ll undercut their own case. It’s a lesson I learned the hard way in that Genovese Family trial: get right to it, or risk losing the moment. 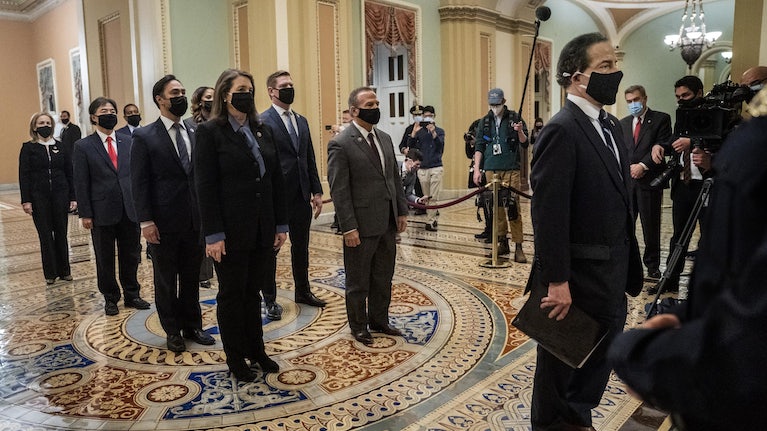 Note From Elie: Senate Trial Should Be “Thin to Win”